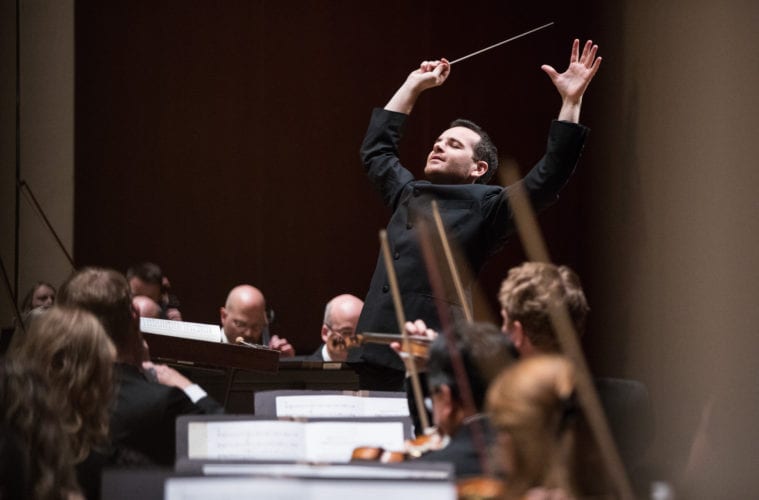 The Atlanta Symphony Orchestra’s concert last night focused on the city of Paris, a crucible in the early 20th century for trends such as impressionism, Russian ballet and general intellectual ferment. The program was enthusiastically received and repeats on Saturday.

Stravinsky’s suite from The Firebird, originally in 1910, then arranged in 1911 and 1919, was his first collaboration with art critic and ballet impresario Sergei Diaghilev. This work bewitched Paris audiences and made Stravinsky an international celebrity. Maurice Ravel’s Piano Concerto in G Major (1931) — infused with previous encounters with jazz in the United States — premiered in Paris to acclaim. Lastly, Prokofiev’s Symphony No. 4 was a later adaptation of Diaghilev’s last ballet commission in 1928–29, The Prodigal Son, which premiered in Paris.

This program is really two different concerts heard back-to-back: an oddity of a Prokofiev symphony that had never been performed by the ASO before versus energetic and taut renditions of the well-known Ravel and Stravinsky.

In looking through online reviews of Prokofiev’s symphonies, I was struck by a common description of Symphony No. 4 — “meh” — in contrast to the accolades bestowed upon some of his other symphonies, particularly Symphony No. 5. While I welcome the performance of neglected works, it seems that Prokofiev’s Symphony No. 4 has been neglected in the concert hall justly. This adaptation of a biblical ballet, The Prodigal Son, to a developmental medium, and then expanded by about 11 minutes in length, is weakened by many long-winded ostinatos, vamps on dance styles such as the polka and self-contained episodes that fizzle out instead of leading onward. One senses how Prokofiev’s Symphony No. 4, with a soundtrack- and movie-like atmosphere, calls out for its missing dance choreography.

French conductor Lionel Bringuier led the ASO in a precise if somewhat dry account of the first movement. The second movement, Andante tranquillo, had moments of serene lyricism in the strings with rocking, ostinato accompaniment, but suffered from the infusion of a poorly timed comedic dance episode. The Moderato, quasi allegretto had an expansive, lyrical first theme with prevalent wrong notes — notes not within a major or minor scale but that are a hallmark of Prokofiev’s style. The fourth movement was a primitive march that listeners may find more typical of the composer’s oeuvre. Given this work’s shortcomings, I sometimes wished that Bringuier would communicate his own expressive interpretation instead of letting one emerge from the orchestra.

Prokofiev’s Symphony No. 4 is a somewhat unfair work by which to judge Bringuier, a relatively young conductor and cellist who has been in a resident post under Gustavo Dudamel at the Los Angeles Philharmonic since 2011. His style focuses on well-controlled gestures, precision, an extremely large pattern and letting the music speak for itself — or, on the other hand, a reluctance to engage an orchestra on an expressive level. In the concert’s second half, Bringuier’s controlled approach increasingly paid dividends, with the work of Ravel energetic and crisp and Stravinsky’s The Firebird taut and often uptempo although not excessively driven. Ravel’s Piano Concerto in G Major, with the French pianist Lise de la Salle (b. 1988), started bright and ebullient in the first movement, Allegramente. De la Salle contributed crisp staccatos and incisive syncopations in an often serene, thoroughly virtuosic performance.

Ravel’s second movement, Adagio assai, showed de la Salle as a masterful collaborator who can immerse herself in the orchestra’s sound. This movement is not to be missed: Its melodic line in the piano starts as a noble but hauntingly simple cantabile with incredibly long-breathed phrases. The mood is nocturnal and otherworldly, and the magic intensifies as the piano’s figuration accelerates in increasingly high passagework, which de la Salle played with reverence.

The third movement, Presto, was appropriately dissonant and furious with a fast tempo. Bringuier showed admirable restraint throughout the Ravel and let the fantastic solo work by piano, harp and English horn come through cleanly.

Stravinsky’s The Firebird is a historical turning point: a heady mix of Russian nationalism, impressionistic writing influenced by Rimsky-Korsakov and an emerging primitivism that explodes soon thereafter in the Rite of Spring. The “Introduction” was taut, with Bringuier setting an energetic, lilting tempo that emphasized harmonic colors and dance-like rhythms instead of sentimentality.

“The Princesses’ Khorovod (Round)” featured many standout solos from the ASO: horn, flute, cello and first violin, in particular. The movement ended on a lovely, soft sustained chord. The third movement, “Infernal Dance of King Kastcheï,” was the only piece that was relentless, although with many dynamic surprises and nuances.

The fourth movement, “Berceuse,” portrays how the firebird lulls the evil King Katscheï and his followers to sleep. Fittingly, the ASO took a gentle, sleepy approach — standout bassoon solos provided detailed color. The fifth movement, a triumphant “Finale,” was exceedingly joyous and crisply executed. The tempo was fast but not rushed. Bringuier proved himself a master of shocking, grand arrivals, particularly at the movement’s end. Despite the large forces used, however, one could still hear the harp part distinctly. With music this vivid and bursting with color, one should allow the music to speak with clarity — as Bringuier did.

The evening was a feast of orchestral colors that allowed the audience to experience influences of the United States and Russia through one glorious meeting point: Paris.