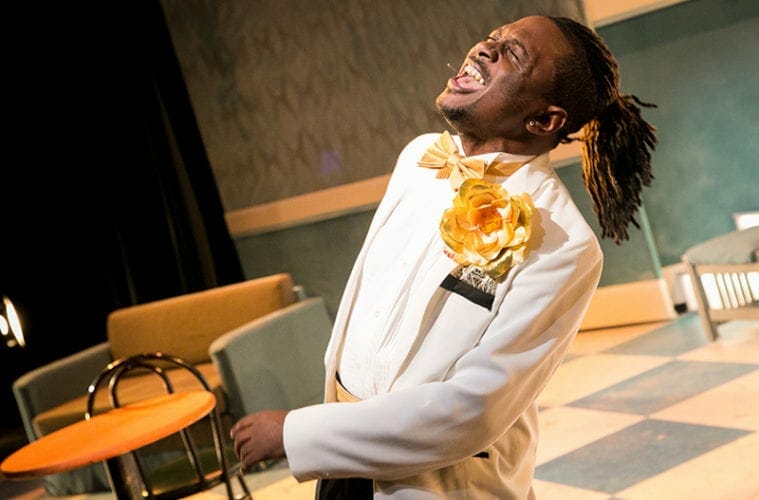 The jukebox musical has evolved tremendously in the last 40 years. Shows such as Jersey Boys, American Idiot and Ain’t Misbehavin’ have pushed the art form in a new direction. For American Idiot, Green Day’s music is used to further its story metaphorically. In Jersey Boys, it’s directly in correlation to what the group went through. However, in the classic Five Guys Named Moe, at Theatrical Outfit through June 30, that’s what this show is missing.

Set to the tune of Louis Jordan’s biggest hits, the show features classics like “Don’t Let the Sun Catch You Crying” and “Let the Good Times Roll.” But in this case, the show might be too big for its space. This production is filled to the brim with talent that begs for more eyes to see it. With Thomas W. Jones II’s choreography and direction, Five Guys Named Moe radiates an energy that could light up Atlanta. But the biggest question is, “Has Five Guys Named Moe aged well in the jukebox musical era?”

Like Jagged Little Pill and Head Over Heels, Five Guys Named Moe uses Jordan’s music to tell its story. But does it tell its story as well as its contemporary counterparts? I don’t think so. There’s no tracking or glue to really stitch the show together. It also points out that the majority of Louis Jordan’s discography is about women — like 80 percent.

Five Guys Named Moe is an emotional journey through the mind of Nomax. Nomax has just forgotten his girlfriend’s birthday, and she leaves him. He opens the show drunk and lonely until the five Moes appear like the muses in Greek mythology. Eat Moe (Trevor Perry), No Moe (Eugene H. Russell IV), Big Moe (Eric Moore), Four-Eyed Moe (Omar Madden) and Little Moe (Lawrence Flowers) — all figments of Nomax’s imagination — show up and take Nomax on a musical journey of enlightenment. They put him in the driver’s seat of his destiny and adjust the steering wheel a little when he needs help to his destination, his love. This show itself truly doesn’t have meat to it — meaning, there’s nothing to dig into. The moral is “Be considerate. Treat women better.” With a basic moral and an otherwise simple book, Five Guys Named Moe’s cast makes up for the slack in the material.

Russell, Madden and Moore bring pure comedy in this piece! The three individually collect the biggest laughs in the show, and you can tell they’re having fun. They also lead the numbers that you’re most likely to leave singing. I couldn’t tell you how many times I’ve sung “Caldonia” since seeing the show.

Flowers sings like he found a cheat code to vocal control. Think back to being a kid and having to find codes and entering a 14-step pattern just to do one move — it’s just like that. His is a meticulous and well-thought-out musical and rhythmic process that should be applauded!

Perry deserves an understudy of the year award for this performance. He found out a week before opening night that he’d be going on in the show indefinitely when the original Eat Moe was injured. In a week, he learned the blocking and choreography for the role. He could teach a master class in preparedness.

Sterling McClary absolutely steals the show as Nomax! He’s redefined what it means to be a triple threat. All of his tap, ballet and modern training are on display in this role. In all of his scenes and songs, he’s present and listening. While he’s dancing, you can see every intention and how he moves to further his story. Sterling’s made the transition from ensemble to leading man, and I’m thrilled to see what’s next for him.

If you can move past the material of the show, this cast is phenomenal. I can say without a doubt that there’s no other show in Georgia with this much heart and talent. No other show currently running asks this much of its cast, and it’s honorable for these guys to take it all on.