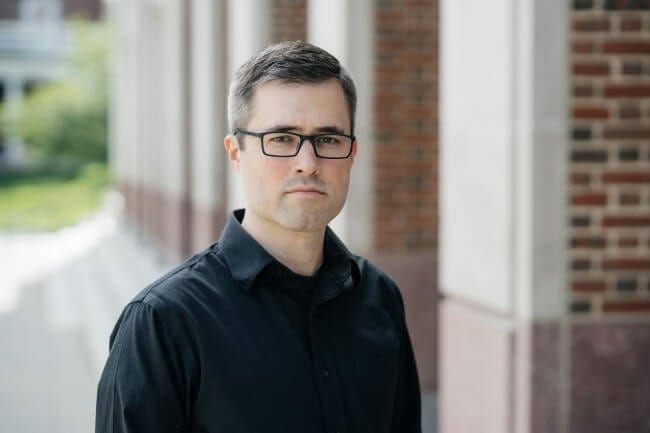 Everything takes place within a larger context: a conversation with Mark Bray

In January, Mark Bray, a historian currently lecturing at Dartmouth College, was in Washington, DC, to witness protests against Donald Trump including during the Presidential inauguration and the Women’s March. Soon after, Bray wrote an essay for ROAR titled “Everyday Anti-Fascism in the Era of Trump.”

“I was thinking about ways in which ordinary people in their everyday lives could take tangible steps to push back against efforts to make racism great again, to make fascism great again,” Bray says.

Based on that article, Bray was invited by National Public Radio to discuss anti-fascism on an episode of “On the Media.” The topic was of keen interest following a protest that led to the cancellation of an appearance in February by Milo Yiannopoulos at the University of California. During the protest, some participants scuffled amongst themselves and with police and caused destruction of property on the campus and elsewhere in the city. One listener who heard Bray talking on the NPR broadcast was Dennis Johnson, the founding editor of Melville House. Johnson contacted Bray, and the two men quickly put together a deal to write a book on the subject of antifa.

“I cranked it out, start to finish, from late February to end of May,” Bray says. “It was supposed to come out in September, but they rushed the publication because of the events in Charlottesville.”

In early September ArtsATL writer Doug DeLoach interviewed Bray on the phone. On Saturday, September 23 at 4 p.m., Bray will be at A Cappella Books to read, discuss and answer questions about Antifa: The Anti-Fascist Handbook. The event is free and open to the public.

ArtsATL: How does antifa differentiate itself within the political spectrum?

Mark Bray: Antifa is a pan-left revolutionary socialist politics, which includes anarchists, communists and socialists from across the radical left spectrum. A lot of the people who are part of these groups also do the sort of neighborhood left organizing that most people are familiar with. Some are union organizers, some are environmentalists. Essentially, antifa seeks to combat fascism, but it also wants to cultivate a broader revolutionary movement.

ArtsATL: Tactically speaking, how does antifa explain or justify its activities?

Bray: From the perspective of the antifa, two different scenarios are most commonly encountered. The easy one to understand is when a neo-Nazi group shows up or a social center or a fascist party develops within a community (the latter situation being more common in Europe). At some point, certain people in the neighborhood, such as immigrants and queer or trans persons, come under attack physically or are otherwise threatened. Eventually, this aberrant behavior metastasizes to the point where local people feel the need to organize against the communal threat. In this scenario, the anti-fascist resistance would be clearly predicated on self-defense.

What is harder to understand is that anti-fascists see self-defense both in the immediate sense – how to respond when a neo-Nazi shows up at your door with a baseball bat – and in a preventative sense. The latter perspective compels us to answer the question: Given the historical behavior of these groups, which includes fomenting violence, what is the most effective way to prevent the neo-Nazi from showing up at your door in the first place?

The anti-fascist response draws upon a wide variety of tactical maneuvers, most of which are nonviolent, such as monitoring white supremacist groups and figuring out who they are by performing online and in-person research, by keeping track of their events and pressuring owners of venues to cancel those events. The repertoire includes confronting fascists in public, stopping their efforts to normalize themselves and preventing them from developing a viable political organization, which sometimes requires force. From the antifa viewpoint, the danger presented by fascism, Nazism and white supremacy is so clear-cut, it doesn’t make sense to wait until an immediate need for self-defense arises before applying whatever methods are deemed necessary to stop the movement from gaining ground or gathering momentum.

ArtsATL: What is the relationship between antifa and insurrectionist groups or movements, such as the intifada in Palestine?

Bray: There are antifa affinity groups, which have engaged in some of the more aggressively confrontational moments that attracted media attention. There are broader anti-fascist platforms, which are organized out of labor unions and social centers, whose members and supporters don’t, as a rule, wear masks or engage in physical confrontations. When we talk about insurrectionary moments in history, they come out of a wide range of origins. There can be left-wing insurrections and right-wing insurrections. There have been religious insurrections and national liberation insurrections, as we see occurring in Palestine.

ArtsATL: In the Antifa Handbook, you include an interview with Iggy, an anti-fascist from Atlanta. . .

Bray: Iggy was interesting because he was involved in the early days of anti-racist action in the late ’80s and early ’90s and he remains part of the Atlanta Antifascists today. Iggy, like a number of other people I interviewed from the US, got into this work due to stress being felt within his local social scene. For people like Iggy, that scene was the punk and skinhead community.

ArtsATL: How does antifa fit within the legacy of racism in the South, especially regarding the confrontational aspects of the national struggle for civil rights?

Bray: When you look at the United States, the perspective is that fascism and Nazism happened “over there” during World War II, not over here, [although] some historians have depicted the KKK as a proto-fascist organization based on its origins in the 19th century. However, without getting too deep into that story, we can see that opposition to the KKK and white supremacy has its own contour and trajectory, which differs from the development of anti-fascism in Europe.

During the civil rights era, debates often centered on how to respond to racism and the Klan, as well as how to advance the situation of African Americans. Groups and individuals advocating for militant self-defense against white supremacy stood in opposition to those who insisted on a nonviolent strategy – the Malcolm (X) versus Martin (Luther King, Jr.) argument.

ArtsATL: Since nonviolence worked during the civil rights struggle and against British rule in India, why is aggression or violence viable as a political tactic today?

Bray: Firstly, most of what anti-fascists do is nonviolent. The percentage of action that could be considered violent is very small. At the same time, there have been few instances in history where nonviolence was used when no occurrences of violence were happening elsewhere. Even in the ’60s and ’70s, as the Civil Rights movement was developing, riots were happening while much of white liberal America was asking, “What will we do if we don’t concede certain rights and extend advances to the African-American community?” The response was reflected in the JFK quote, “Those who make peaceful revolution impossible will make violent revolution inevitable.” The threat of the alternative made certain reforms, which previously might have been unpalatable, seem more reasonable by comparison.

Everything takes place within a larger context. . . . The success of nonviolent civil disobedience hinges upon the ability to leverage public opinion to influence decision-makers. . . . When we turn our attention to Germany and Italy in the ’30s and ’40s, it seems less clear that the sort of public opinion, which could be leveraged to influence decision-makers to significantly change what they were doing, was ever going to develop, especially as time went on. As Hitler’s killing machine was ramping up, I doubt that civil disobedience alone could have stopped the process, especially in Eastern Europe where Jews and Slavs and Poles were already being treated as sub-humans.

ArtsATL: In the book, you appear to be proposing an argument, which simplistically expressed, asserts that when there are no fascists, there won’t be any anti-fascists.

To some extent, Charlottesville exposed the latent broad opposition to the alt-right, an opposition which includes antifa as well as other groups. Many alt-right events were canceled after Charlottesville. The attempt by the alt-right to frame themselves as a whitewashed version of neo-Nazism has been tarnished. I think people are less willing now to give alt-right politics the benefit of the doubt.

I’m not sure if the alt-right will continue to grow, but I wouldn’t be surprised if after the Trump administration fades away, it also mostly fades away.