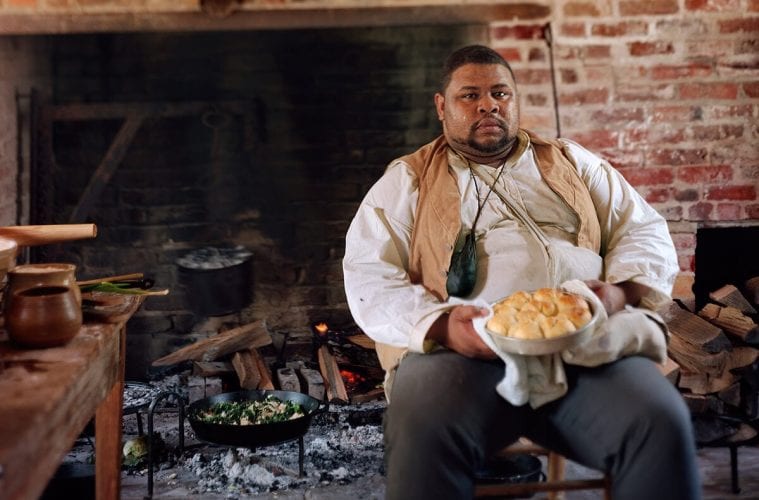 Slavery does not define us: a conversation with Michael Twitty

What does it mean to be rooted? To be intentional about where the genesis of your work and things you’re passionate about are derived from? For Michael W. Twitty, a food historian and Afroculinarian in his own right, being rooted is a still, silent, strong and sure-knowing. It represents the beginning, his journey now and as it continually evolves forward into the future.

And most certainly, his first book, The Cooking Gene: A Journey Through African-American Culinary History in the Old South (Amistad Press, 464 pp.), published on August 1, is a yet another chapter in his evolution — and deeper understanding of food and his heritage. “I think for me, it just kinda began in the home kitchen,” Twitty said. “The kitchen was pretty sizable in the house I grew up in and it was the heart of the home. Everybody in my family cooked. It was all very important when I was a child.” Twitty grew up in the metropolitan Washington, D.C., area, where he currently lives.

Despite his many interests, food has always remained central. It is apparent in his food writing and published pieces for publications such as NPR and the Guardian. You can see the traces of food’s importance to him in his past post as a Smith Symposium Fellow for the Southern Foodways Alliance in 2014 and an inaugural Revolutionary in Residence with the Colonial Williamsburg Foundation.

As much as his work represents his connection to food, it is also a vivid, wide, brushstroke of his insistence on delving into who he is, his heritage and culture, from whence he came.

His blog, Afroculinaria, explores and expounds upon the plethora of connections between the American South foodways and the African diaspora. Pictures, stories and written mementos span the blog’s pages and have since its genesis in 2011.

His book was more of the same. He embarked upon walking the road and telling the story, frame by frame, voice by voice, dish by dish, ingredient by ingredient in The Cooking Gene, walking through his own stories, as an African American, as a Black man, as a Jewish man.

And also to inspire other African Americans, other Black folk, to peer within and forge self-acceptance. Along with joy in doing so.

“A lot of people have the attitude that Black people don’t have a culture,” Twitty said. “[It was important to me to be] . . . able to identify where our culture is. Being able to tie us to something bigger and broader than the slave trade. We are bigger than slavery. Slavery does not define us and our development as a people.”

Recently, Twitty journeyed to Senegal, a country where he discovered his roots as a result of DNA testing. In the future, he’s planning to travel to Ghana, too, where he also has ancestral ties.

When he spoke of his journey to Senegal, he mentioned how empowering and life-changing the trip was. Twitty, in many ways, wants the same for other African Americans.

“I just really wanted to make sure that African Americans knew where they came from,” Twitty said. “I do this so we can, in essence, own our own source code. [. . .] To own the source code, you have to go back to the beginning. You have to know your etymology.  No one can take that away from you. Then you can move forward knowing that this is your heritage. You have a legacy.”

Twitty will be featured in conversation at the Atlanta History Center on September 21 at 8 p.m.