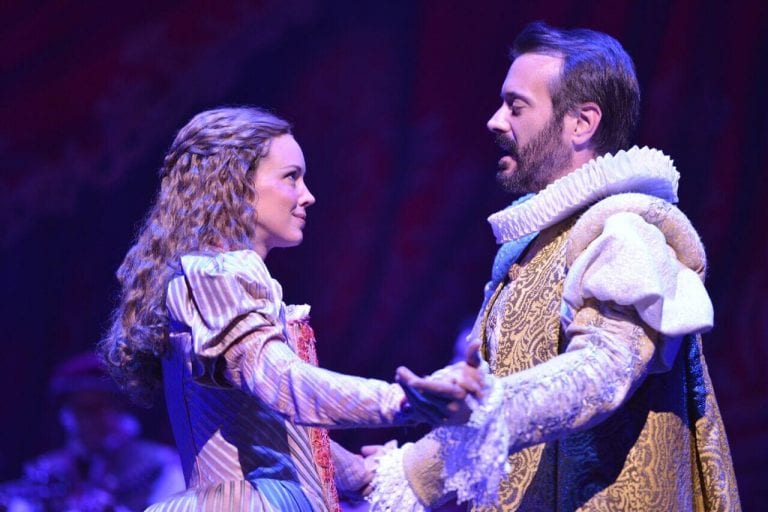 Review: Alliance serves up empty calories as it takes to the road with “Shakespeare in Love”

Shakespeare in Love, the Oscar-winning 1998 film, has lately been turned into a play, and it’s currently making the rounds at a number of regional theaters around the country. A new production opens the 2017–18 season at Atlanta’s Alliance Theatre, and ArtsATL critics Jim Farmer and Andrew Alexander had this to say about the show.

Andrew Alexander: How dost thou, Jim? We both saw the Alliance Theatre’s Shakespeare in Love on opening night. There’s a lot to talk about, including the fact that the production isn’t actually taking place at the Alliance. I didn’t like the show, which I’ll get to, but my objections are probably a bit idiosyncratic. All of which makes me especially curious to start with your thoughts.

Jim Farmer: I’m dandy. Thanks! I’m with you on this. When I heard this production was opening the new season, I was a little surprised. Not many people talk about Shakespeare in Love these days, and when they do, it’s more trivia-related. It’s the film that somehow beat Saving Private Ryan for a Best Picture Oscar. Or the year that Hollywood told us that Gwyneth Paltrow was more worthy of a Best Actress award than . . . Cate Blanchett. I’m still processing that one. I don’t remember much about the movie. I was relatively entertained but forgot about it before I got home from seeing it. And that’s a bit how I felt here. Dost thou feel the same?

Alexander: Verily. At best, the evening seems pretty slight. I saw the insipid film when it opened and disliked it. The story — a wildly fictionalized, speculative lark purporting to show a young William Shakespeare writing Romeo and Juliet — reimagines Shakespeare addressing Sonnet 18 to a woman. But Shakespeare’s early love sonnets are addressed to a young man. This fact has made people uncomfortable for centuries. The English seem to have been especially embarrassed by it, and for ages they sought to explain it away or gloss over that aspect of their national literary hero’s image.

The blithe, contemporary straight-washing in Shakespeare in Love came as a total shock when I saw the film. The play goes one further by giving us a gay stereotype, a foppish member of Queen Elizabeth’s court, a foil and antagonist to the heterosexual love story, a servile, swishy minor character for the audience to laugh at. Ew. Strangely, I wasn’t as bothered by the play as I was by the film; I think I’m just older now, and I’ve gotten better at not letting stupid things annoy me.

But still: taking such liberties with a writer’s work — to take his poetic expression of a denigrated passion and “straighten it up” in order to cram it into a piece of light entertainment for popular consumption — seems to me a terrible turn, even a sort of literary crime. I primarily blame the original screenwriter, English playwright Tom Stoppard, who should know better. All that aside, there were a few things to like here, including a cute dog. It sounds like neither of us were particularly thrilled by this, but was there anything you did like about the show?

Farmer: I really liked the cast, especially Thomas Azar, who brings a passion and drive to the character of Will. Bethany Anne Lind is one of my favorite local actresses, and she is delightful as Viola, even if the romantic sparks that should be between her and Azar don’t really materialize. The supporting cast is a Who’s Who in Atlanta theater — Neal Ghant (making a fine Marlowe), Tess Malis Kincaid, Chris Kayser, Travis Smith, Joe Knezevich and Tinashe Kajese-Bolden. Richard Garner brings great cheer to the role of the theater owner, but he also directs the production. He wasn’t planning on performing, but Susan Booth — the Alliance’s artistic director — convinced him. It’s a mixed blessing, I think. He’s terrific in the piece, but I didn’t find this to be one of his signature directing gigs. Its pacing seems really off at times, especially a rambling second act. It’s a two-and-a-half-hour play (a bit longer than the film), and I wish Garner the director had tightened it up and moved it more efficiently. Any thoughts on that or the cast?

Alexander: The cast is great, and even though I dislike the silly script, I could see that the performance was carried out with speed, clarity and energy. It’s a long show, but it covers a lot of territory: a love story, a story about a woman entering a man’s world, a peek backstage into a community of theater-makers and so on. As the Alliance venue itself undergoes major renovations, the production takes place at the Conant Theatre, the former home of Georgia Shakespeare, with many former Georgia Shakes cast members on the stage.

This is bittersweet. It’s crazy that a summer Shakespeare rep couldn’t be maintained in Atlanta. The Alliance hasn’t done an actual Shakespeare play in ages, so watching them push this facetious, Disneyfied dud about Shakespeare into the footlights is frustrating. I did love Tinashe Kajese-Bolden’s hilariously imperious Queen Elizabeth; I remember Judi Dench’s brief appearance as Queen Elizabeth was similarly the best and funniest thing about the film. Atlanta audiences are prurient, though! Anytime anyone said “Hail, Regina” with the British pronunciation, with a long “i,” it got a big laugh.

Farmer: I have such joyous memories of plays I saw at Georgia Shakespeare that this feels like a bit of a letdown, I must say. I wish the play had less cuteness and one-liners and more commentary on its subjects or its time — or even more depth. It’s about a woman entering a man’s world, and I wish the play had more about that aspect. Yet taking the production for what it is,  it mostly succeeds. Casts such as this don’t come around all the time, and the ensemble dive into the literate, droll script. On a technical level — costuming, the set, etc. — it’s as polished as you’d expect an Alliance production to be. I must add — dogs on stage can be a cheap trick, but man this dog here is cute! He’s much more palatable than Gwyneth Paltrow, too. Is that too harsh?

Alexander: It may be hard to remember, but long before she started lifestyle-blogging about steaming her regina, Goop was actually an appealing movie star. Still, the dog wins this one, hands down. All in all, I thought Shakespeare in Love seemed like empty calories with Shakespeare’s name and likeness slapped on it to give it some class. Depending on your point of view, that’s either a bit of harmless fun or else it’s a cardinal sin of the theater. Meh, I think most people will have a good time. I’ll work on not hating them for it. Final thoughts?

Farmer: I agree! Not likely to linger in anyone’s mind for much time, but a pretty solid piece of entertainment with a top-notch (mostly all-local) cast. Now if only someone could get this ensemble into a more substantial piece . . . or get that Steaming the Regina script to the stage soon! As always, Andrew, it hath been a pleasure!

Alexander: Up next: Steam, a new musical based on the life of Gwyneth Paltrow. See you there, Jim! A pleasure, as always.