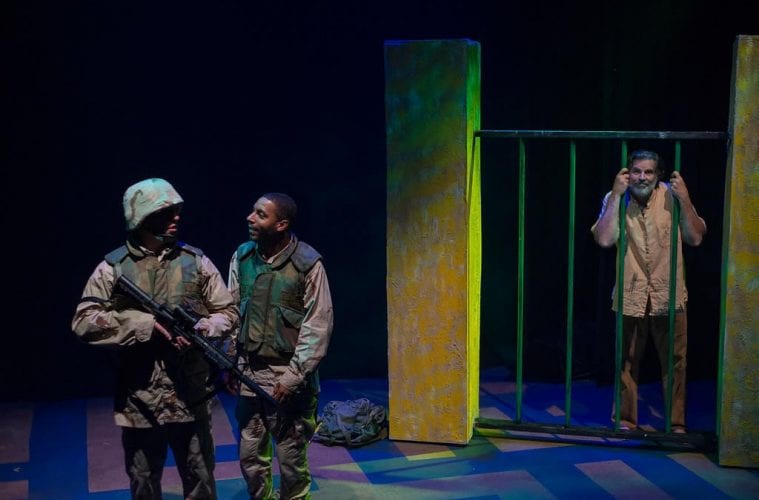 Review: “Bengal Tiger” is a self-conscious trek to Baghdad with characters that don’t connect

I ended up more puzzled by the success of Rajiv Joseph’s acclaimed Pulitzer- and Tony-nominated 2009 play Bengal Tiger at the Baghdad Zoo than I was moved at the recent Atlanta premiere of the work at 7 Stages, running through October 8.

The play opens in contemporary Baghdad as two marines have been ordered to keep watch over the Baghdad Zoo following the American invasion of 2003. They taunt a caged tiger, played by a human actor in street clothes who can speak to the audience, though he can’t be heard by the other human characters on stage.

The soldiers end up shooting and killing the tiger after it attacks (the opening action, minus the speaking tiger, is based on a real incident of the war). For the remainder of the play, the tiger wanders the streets of Baghdad as a ghost, observing the devastation and contemplating the nature of the people and things he encounters. We follow the intersecting stories of the two marines, the tiger, an Arabic translator and also the ghost of Uday Hussein, Saddam Hussein’s real-life son killed during the invasion.

Lito Tamez’s set is spare, which seems appropriate — we jump from location to location, and place is often suggested by a few simple pieces of furniture or the dialogue itself — but there’s also something unattractively threadbare and haphazard about the various set pieces. Stevie Roushdi’s lighting is frustratingly dark and uneven, with actors’ faces often completely obscured by deep shadows if they so much as turn or move a few inches away from the dim central lighting. Strangely, director Michael Haverty places several crucial scenes behind a black scrim lit to be transparent: the action that takes place behind it seems far away, dark and indistinct. Other scenes taking place in front when the scrim isn’t transparent seem crammed into too small a downstage space.

Bengal Tiger is an ensemble piece, but one in which all of the characters end up seeming minor. There’s no gripping focus; I was never excited, horrified or even especially curious to learn someone’s fate. The plot feels more like a cluster of related, accumulating incidents than a story in the truest sense. There’s an admirable jauntiness and unpredictability to the narrative — no one who saw just the first few minutes could possibly predict the last — though very little steam, excitement and energy are generated during this journey in spite of its level of invention.

Many developments, like a robotic hand or a treasure hidden at a leper colony, are so unpredictable and offbeat that they start to seem forced and self-consciously devised. By the end, it seems nearly everyone on stage has become a ghost, and come to find out: not many interesting things can happen to ghosts.

Bengal Tiger brings to mind Angels in America, a clear influence, a play that’s likewise teeming with ghosts and backgrounded by monumental history. The newer play, however, does not do well by that comparison. In Bengal Tiger, we’re often just left with the tiger alone on stage pondering familiar and worn-out existential questions: a solitary, static, distinctly undramatic, even dull situation.

Actor Kevin Stillwell as the tiger does little to enliven things, and though the role was famously played by Robin Williams on Broadway, it’s hard to imagine him, or any actor, doing much better with what’s there. The play’s various objects such as a gold-plated pistol seem symbolic in a cerebral sort of way, maybe everything is allegorical, but allegory and symbol aren’t my favorite narrative devices — are they anyone’s? — and I’m not particularly adept at unpacking them.

I was thrilled to see the immensely talented Atlanta actress and theater-maker Marium Khalid back on stage after a long absence, but disappointed by the two small, uninteresting roles she played: a non-English-speaking variation of the “me-so-horny” foreign prostitute and a victimized young innocent. In the play, Joseph does not write especially nuanced or substantive roles for women: the only two other female parts are small, a leper and a Baghdad housewife who shrieks when her home is raided, both given few lines and none in English.

Dehumanizing the enemy and abstracting combat are seemingly two necessary projects in leading a culture into war. Literature, drama in particular, stretching back to The Persians, has often sought to counterbalance those destructive impulses, and I wondered if the immense success of this decent but unsatisfying play might be due to audience members wanting it to fill just such a preconceived, expiatory purpose.

Anyway, many, many viewers have found a lot to admire in Bengal Tiger, and I hope that’s the case in Atlanta, as well. I’m fine concluding I simply don’t get something that others have enjoyed. But still, I think a fair number of audience members will depart as dissatisfied as I did, having been handed plenty to ponder but not a lot to feel.