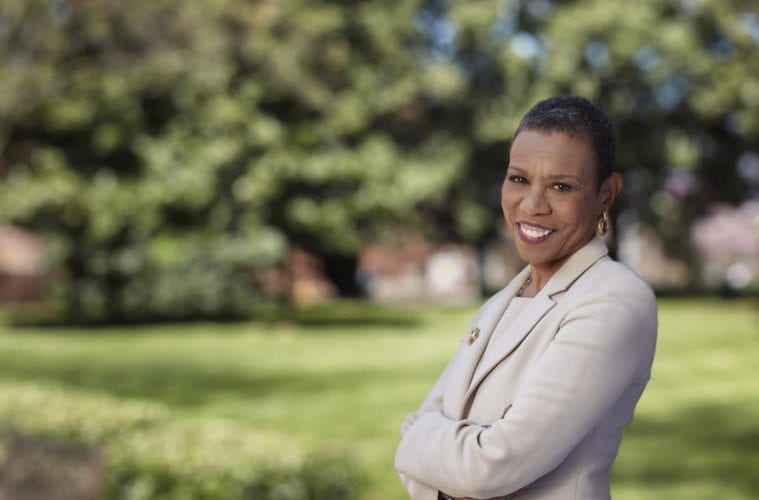 Romare Bearden once stated, “You should always respect what you are and your culture because if your art is going to mean anything, that is where it comes from.” Bearden’s life spanned several eras of Black American history, and those generational evolutions — the nuances and the paradigm shifts that took place in the century following the Civil War — are all contained and reflected in his work.

In her new book, An American Odyssey: The Life and Work of Romare Bearden, Dr. Mary Schmidt Campbell, president of Spelman College, embarks on a comprehensive and contextual journey through Bearden’s life, art and legacy. In doing so, she sheds light not only on the breadth and importance of Bearden’s work, but on how the artist gave voice to a generation and a culture through his self-expression. Bearden admirers and scholars already invested in his work stand the most to gain from Campbell’s labor of love, which she views as a continuation of the efforts that have been made before her, such as Myron Schwartzman’s and Jan Greenberg’s earlier works. “We build on each other’s work; we don’t discount one another,” she told ArtsATL during a recent phone interview.

But Campbell brings to this history a personal knowledge that few other authors can lay claim to. “He was the person who directed me to apply for the position at the Studio Museum in Harlem, which started my career in New York City,” she says. Campbell — who went on from the Studio Museum to serve as the cultural affairs commissioner for New York City, the dean of Tisch School of the Arts and the vice chair for President Obama’s Committee on the Arts and Humanities — was no stranger to the importance Bearden placed on building up a community of artists around him. Having experienced his mentorship and guidance directly, Campbell, who was appointed president of Spelman in 2015, brings an intimate understanding of the artist and his work to her biography. Her affection and appreciation for the artist can be sensed through the book’s unerring commitment to detail.

“When he passed away in 1988, I gave myself time and thought about writing a biography,” she says. “I didn’t engage with it too seriously.” But the idea percolated over the years and evolved into something greater. “This is not only the story of Romare Bearden. It’s a story of visual culture in this country,” she says.

An American Odyssey approaches Bearden’s life much as Bearden did: as the product of his times and as part of a larger historical narrative. The book’s timeline predates the artist himself, starting with an overview of the artist’s great-grandparents and grandparents and leading up to the life of his parents. “His great-grandparents were the poster children of what reconstruction could have meant for the country,” Campbell says. “And his mother — an entire book could be written about his mother — she was pivotal in shifting the Black vote from Republican to Democrat in favor of FDR. She raised him in the nucleus of the New Negro movement. He couldn’t have had a more intense education growing up.”

Bearden was born in Charlotte, N.C., in the autumn of 1911, the son of Bessye Bearden and Richard Howard Bearden. The family moved to Harlem when Bearden was just three years old, and they flourished there. Bessye became extremely politically active, helping advocate for the women’s suffrage movement, founding the Colored Women’s Democratic League and becoming a correspondent for The Chicago Defender. His father worked for the railroad. During this time, young Romie split his time between the family home in Harlem, where he grew up surrounded by the likes of Duke Ellington and Langston Hughes, and Charlotte or Pittsburgh with his grandparents. His first job in the art world was as a cartoonist in Baltimore, where he worked from 1935 to 1937 before venturing into his other vocation, social work. “For 30 years, he worked a regular 9-to-5 with people who were in distress,” Campbell says. “He did it very seriously and very well.”

Campbell says that her research and personal interaction with source material from Bearden’s life cast a new light on the artist for her. “It was wonderful to discover his commitment and tenacity to his art, the way he was able to continue to build community as an artist,” Campbell says.

And through her research, she says, her interpretation of Bearden’s seminal essay “The Negro Artist’s Dilemma,” which was first published in a 1946 issue of Critique: A Review of Contemporary Art, evolved dramatically. “What struck me in rereading it was how angry he was with the idea that there were demeaning images of Black people that prohibited the public from looking at them without prejudice or bias,” she says.

In researching that aspect of Bearden’s life, she took a deeper look at images of the era – cartoons, advertising, film, television and lynching photographs — that were heavily circulated at that time, all of which honed her perception of Bearden’s essay and his collage work. “I found an extraordinary volume that worked very hard to demean Black culture,” she says. “He had finally found a way to co-opt those images into something beautiful. Culturally, we’ve lived with these images that demean us, but we’ve been inventive with subverting those images and creating something new and wonderful in spite of them.”

Spelman College President Mary Schmidt Campbell will participate in a lecture and book signing at the Carter Library in celebration of the release of An American Odyssey on Tuesday, September 4, at 7 p.m. Campbell will also be in conversation about the book this Saturday, September 1, at 1:45 p.m. at the Decatur Book Festival.