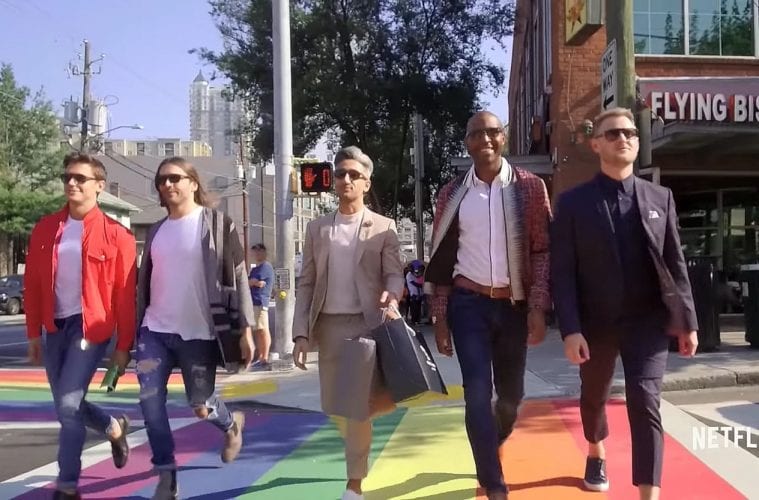 Last year, several friends asked me if I’d watched the original Netflix series Ozark. I hadn’t, which seems weird to me now, since it stars two actors I really like: Jason Bateman and Laura Linney. I’m glad I recently made the effort to cram in all 10 episodes of the 2017 first season, just in time to check out season two, which drops (with 10 new episodes) today.

In a way, Bateman’s role is a dark variant of his work on Arrested Development (which, also thanks to Netflix, got a second, post-Fox life of its own). On Development, Bateman plays the sole responsible member of the cockeyed Bluth family, which he’s working overtime to save from financial and social ruin. In Ozark, he’s Marty Byrde, who’s likewise trying to protect his family — not from creditors, but from an interlocked series of ruthless criminals who’d gladly kill the Byrdes if he takes a single wrong step.

Unhappily married when we meet them (she’s having an affair), Marty and his wife Wendy (Linney) have been living in Chicago with a big secret for several years. A financial advisor, Marty and his partner Bruce run an off-the-record business to launder the money of Mexico’s second-largest drug cartel, operated by Camino Del Rio, aka Del (a suave, sinister Esai Morales). 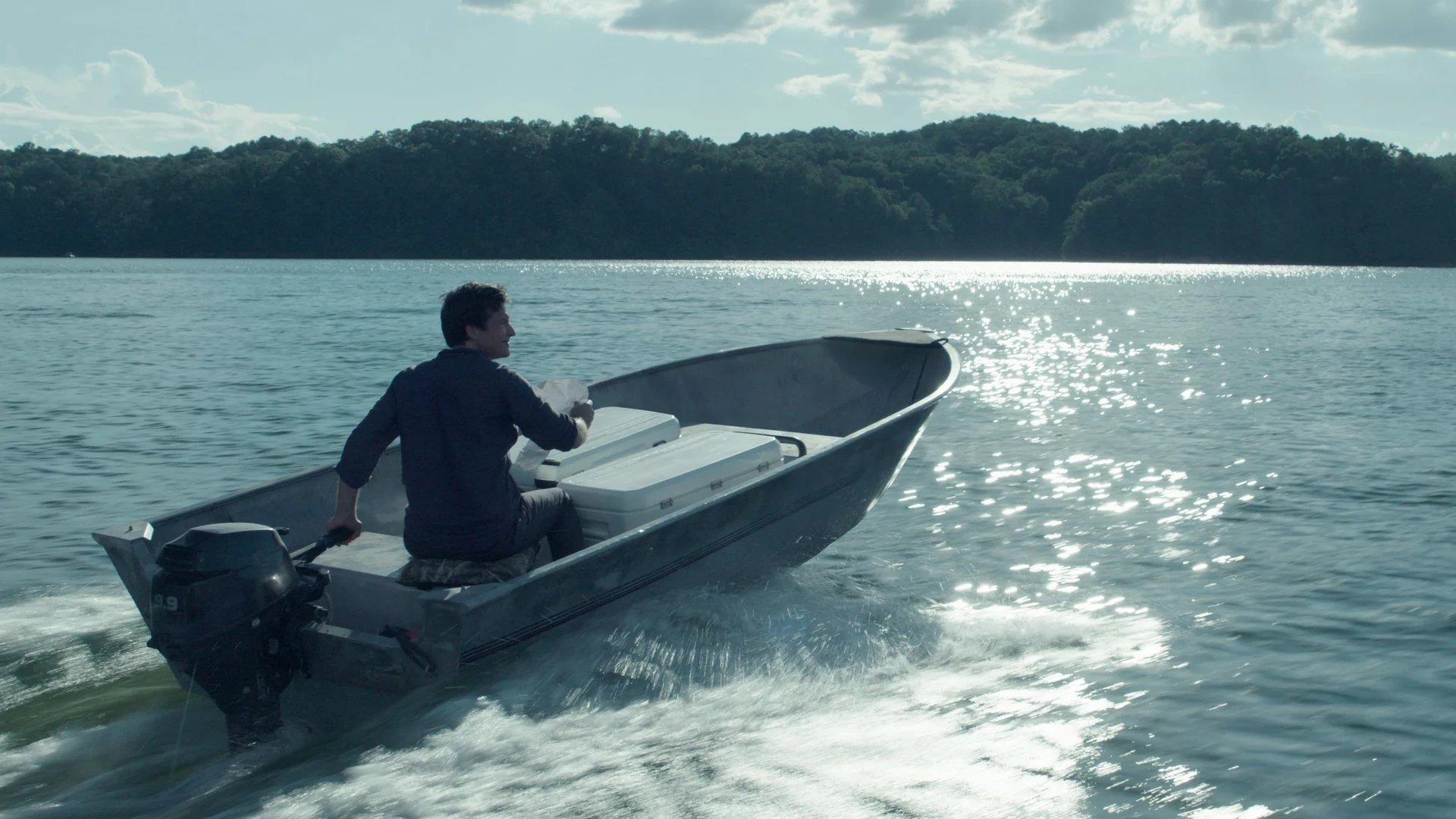 Though Ozark is set in Missouri, most of the series is shot at Lake Allatoona.

When Del learns that Bruce has been skimming and pocketing millions, he makes an unexpected, bloody visit to Chicago. Marty barely manages to bluster his way out of a bullet to the brain by proposing to Del that he, Marty, relocate his family – including a teenage daughter and younger son — to Missouri’s Lake of the Ozarks, repay Del the $8 million Bruce stole, and launder hundreds more million cartel dollars along the waterway’s extensive shoreline. (While the aerial vistas of the lake are the real McCoy, most of the series is shot at Lake Allatoona, northwest of Atlanta.)

Moving to a shoreline home with his alternately bewildered and furious family, Marty tries to get on stable (if fraudulent) financial footing by investing in a local restaurant-resort and trying to get his foot in the door of that classic hub of bad-business shenanigans, a local strip club.

Except that the stakes are life-or-death, Ozark at times can play like a very black comedy, as one obstacle after another makes it ever harder for Marty to keep Del satisfied and his family still breathing. Those obstacles are of the two-legged kind.

One is Ruth (Julia Garner), a smart, wily member of the white-trash Langmore family, who can’t decide if she wants to work with Marty or kill him for his loot. Then there are her two no-’count uncles, Boyd (Christopher James Baker) and Russ (Marc Menchaca). (Russ becomes embroiled in the show’s weirdest, saddest romantic subplot.) Worst of all, besides Del, is local heroin mogul Jacob Snell (brilliant Scottish actor Peter Mullan), whose cornpone-farmer act is camouflage for murderous self-interest. (He’s beautifully abetted by Lisa Emery as his cold-blooded wife and business partner.)

The eighth episode of the first season, “Kaleidoscope,” takes a daringly fragmented (thus the title), nonchronological flashback to the Byrde family in Chicago 10 years before they flee to the Ozarks. The structure is challenging, but by now we’re invested in these characters, and it’s useful to learn, belatedly, the cause of Wendy’s long-ago bouts of depression (which may have led to her embarking on an affair) and to see both Marty and Wendy being seduced by Del into the dangerous/sexy world of crime.

Back in the present story line, Ozark keeps you rapt as Bateman’s Marty spins numerous plates, trying to stay alive. He’s beautifully partnered by Linney. As longtime spouses who can’t decide if they’re sticking together for any other reason than actual survival, they’re terrific. Both savvy comedians, they prove the old adage that comedy is harder than drama, delivering a couple of brutal recrimination scenes that are painful to watch. (Bateman also directed two of the first season’s episodes, and three of the new season’s.)

Bottom line, if you haven’t tried Ozark yet, give it a shot. Oh, and note to self: Pay attention when friends recommend a Netflix series.

None of my friends, on the other hand, said I ought to watch the new, Newnan-shot comedy Insatiable. If they had, they’d be un-friends by now. 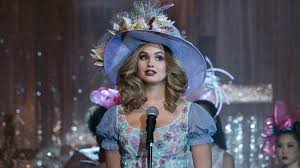 Insatiable has an interesting premise but is stuck in a stunningly misogynistic universe.

Insatiable reminds me of the last season or so of Glee. If you watched that show, you know that’s not a good thing. One of the many, many creations of Ryan Murphy (American Horror Story, Feud), Glee started off as a charmingly goofball, high school semi-musical. By the end, it was an unwatchable mess, sacrificing character motivation and common sense for a quick laugh or a song cue. Insatiable is worse than the worst of Glee and makes something like the overwrought Desperate Housewives look like Chekhov.

The series arrived with criticisms of “fat shaming,” but that’s the least of its problems. The premise: Outside a convenience store one night, overweight high schooler Patty (Debby Ryan) gets into a fist fight over a candy bar with a homeless guy (Atlanta actor Daniel May). A wired jaw, due to her injury, leads to an involuntary liquid diet, and Patty returns to school three months later a knockout, unrecognizable to classmates who once taunted her.

Personally, I think that’s a pretty decent concept. The problem is it’s encased in a stunningly misogynistic universe (weird fact: the show’s creator, Lauren Gussis, is a woman herself, so what gives?). The series is populated by camp stereotypes and very tired jokes. If you’re not bored yet with broad satire about Southern beauty pageants, this show’s for you. Besides Patty, the other main protagonist is Bob Armstrong (Dallas Roberts), a small-town attorney, who, on the side, coaches beauty queens in competitions with names like Miss Magic Jesus. His wife Coralee (Alyssa Milano) is a social climber jealous of the better connected Etta Mae Barnard (Carly Hughes) and her husband, Bob’s rival Bob Barnard (Christopher Gorham, usually shirtless and flexing his pecs). The Bob-Bob competition leads to a nowhere-remotely-plausible gay subplot later in the series.

Insatiable’s male characters are idiots. The women are shrews and venal sexpots, or overfamiliar types. (Patty’s adoring friend Nonnie, played agreeably enough by Kimmy Shields, is a kind of mashup of Stranger Things’s Barb and Willow from Buffy the Vampire Slayer.) Rather than coming across as a shy teen slowly discovering her power as a sexpot, Patty behaves like a lifelong sociopath, determined to bed Bob (an unconvincing lust object) and do whatever it takes to get ahead. It doesn’t help that actress Ryan seems less a believable high schooler than a hardened 30-something, who might’ve just clocked off her shift at the Ozark strip club.

On the plus side, there’s diversity in the casting, with a welcome mix of non-Caucasian actors in sizeable roles. That can’t keep Insatiable from being a stink bomb. I made it through four episodes. More power to you if you can stomach the season’s other eight. 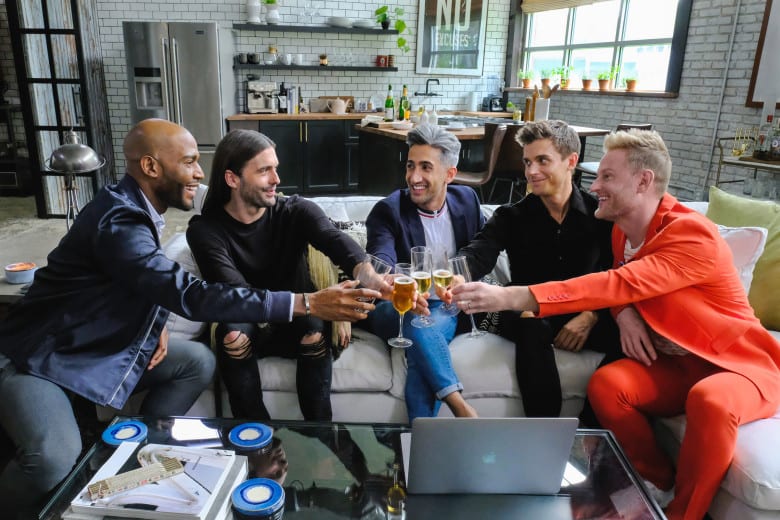 The new Queer Eye is emotionally richer than the original.

Also on Netflix — and not exactly new — is a series that, like Ozark, I’m coming to belatedly. Shot in Atlanta and other Georgia areas, the two-season reboot of Queer Eye is so much better than the early-aughts original, it’s almost hard to compare them, even though the format is pretty much the same. A new Fabulous 5 descend on a nominated person (not always just a straight guy, as was the case in the previous version) to give fashion, grooming, cultural, interior design and food and wine tips.

Maybe it’s because things have changed significantly since the original Queer Eye For The Straight Guy’s 2003 debut — in cultural outlook, as well as in the finesse of reality-show editing — but the new version feels much more relaxed, less a novelty, and emotionally richer. The Fab 5, based out of an Atlanta loft for the shoot, are enormously compelling and endearing.

Stepping away from Netflix (a hard thing to do), if you’re an HBO or HBO Go subscriber, you may want to check out Sharp Objects, which just concluded its run. I read the novel by Gillian Flynn (Gone Girl), her first, so I was interested in the series — but a little shocked to learn that a plot that seemed to lend itself to maybe a three-hour miniseries was stretched out over a full eight episodes. 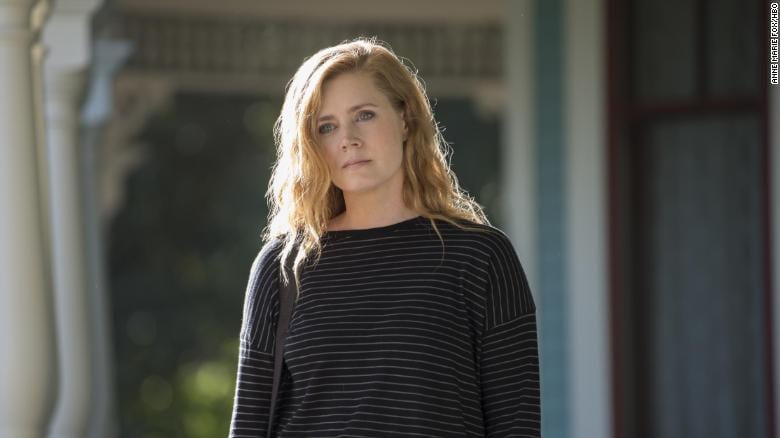 Filmed partly in Barnesville, and executive-produced and co-scripted by Flynn, the determinedly grim tale has been given an attenuated, mood-drenched super-sizing. Set in small-town Wind Gap, Missouri, and given a detailed, claustrophobic Confederacy history you won’t find in the book, it’s the tale of a boozy, self-cutting journalist named Camille (Amy Adams, going 180 degrees from the sunny roles of her early career). She returns from St. Louis to her hometown to write about the unsolved murders of two teenage girls, classmates of her teenage half-sister Amma (Eliza Scanlen).

For the duration, Camille moves in reluctantly (and is reluctantly welcomed) by her genteel, dragon-lady mother Adora (Patricia Clarkson), who rules Wind Gap from her sprawling Victorian mansion. (She owns the town’s main industry, a slaughterhouse that’s a little too on-the-nose for the mystery’s mix of gentried grace and gory death.)

The show is virtually embalmed in its own humid, shadow-drenched art direction. Directed by Jean-Marc Vallée (Big Little Lies), it’s shot with ephemeral, impressionistic split-second edits and flashbacks, aiming to be a lot more mysterious and artistic than the narrative can justifiably support. And did I mention how long it is? Oddly enough, after stretching out its central mysteries for the first seven episodes, the finale’s big, twisty reveal is played out with what-just-happened speed in the final seconds. It feels almost like a willful affront to anyone who hasn’t read the book — a big F-U to the viewer.

On the other hand, it’s hard not to enjoy Adams in even something this self-consciously lugubrious. She largely makes us care about trainwreck Camille based on the goodwill she’s earned as an actress in her previous films; Camille, as written, is otherwise just a hazy mess. And while Clarkson has given us the same emotionally frigid, porcelain routine a few too many times (c.f. the new film The Bookshop), she’s fun to watch as a monstrous modern variant of Blanche DuBois — if Blanche hadn’t lost her mind but instead was intent on making everyone around her lose theirs. She’s an arsenic-glazed magnolia.