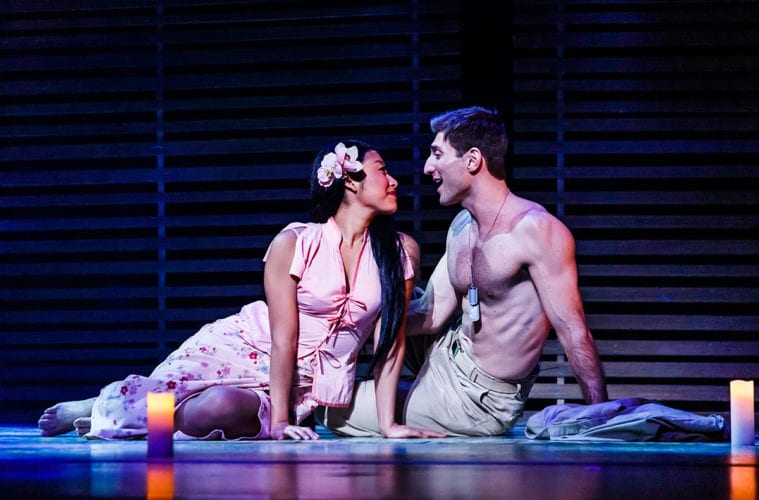 The classic Rodgers & Hammerstein musical South Pacific can sometimes seem like too much of a nod to yesteryear to have anything new to offer. However, the placement of this show’s run within Women’s History Month provokes thought about what it means to be a woman in an environment run by men.

In a production, onstage at City Springs Theatre Company through March 17, director and choreographer Baayork Lee brings forth themes beyond the obvious — showcasing tender relationships, the trials of warfare and the power of love.

The action of the musical takes place on two islands in the South Pacific during World War II and showcases how precious a relationship between a man and a woman can become when the two fall in love during times of international conflict. A young woman, all the way across the world from her home state, meets a charming French gentleman who can do no wrong in her eyes. A brave soldier falls in love with a woman he barely shares a language with. Despite its relatively antiquated portrayal of women, the play makes one believe in the possibility of finding true love where you would least expect it. In our world of competition and conflict, a simple love story enhanced by musical spectacle can be appreciated by men and women alike.

Many of the successes of this production lie with the expert casting and attention to detail paid to the set, lighting and costume elements. Realistic Navy uniforms complement the neutral-toned background of a map hanging in Capt. George Brackett’s office. Wooden slats, a backdrop of distant beaches and mountains and life-sized palm trees create the effect of being in Vietnam. The grand exterior of a French home surrounded by foliage welcomes the audience into the home of Emile de Becque. City Springs Theatre Company in its inaugural season exhibits a standard of professionalism compatible with the Broadway talent the company has employed, boasting “Broadway in the heart of Sandy Springs!” 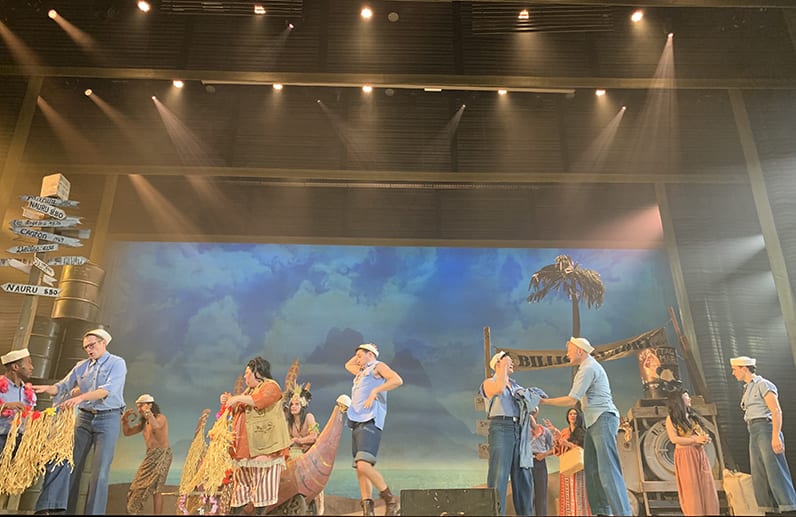 The cast of South Pacific at City Springs Theatre Company.

With a distinct world to create, lighting plays a large role in evoking emotion from the audience about the various wartime environments. Lighting designer Mike Wood uses shadows and soft yellow lights to create the effect of sunlight streaming into the military office through the branches of the palm trees just outside.

Another standout design element is Catherine Zuber’s costumes, which perfectly match the personality of the main characters and the ensemble members. Since the play requires a diverse cast, how the characters are costumed is essential to the accurate portrayal of other cultures. Zuber’s attention to detail lends believability to the Vietnamese, French and American characters.

The cast, in its entirety, is an impressive display of talent. Broadway stars William Michals (Emile de Becque) and Kristine Reese (Ensign Nellie Forbush) do not disappoint in their lead roles. Lee’s dynamic choreography is flawlessly executed by the cast. Other notable performances are Imani Joseph (Ensemble), whose dancing is simply captivating, and Carter McCombs (Jerome), whose debut stage performance as a first grader is the most endearing thing an audience could hope for.

Baayork Lee’s nonprofit organization, National Asian Artists Project (NAAP), aims to educate, cultivate and stimulate audiences and artists of Asian descent through the programs the company offers in the hopes of “creating awareness that talent goes beyond ethnicity.” As Rodgers & Hammerstein intended, South Pacific presents a strong, progressive message on racism. Baayork’s added intentions of inclusion for Asian artists only enhances the quality of the show because of her efforts to showcase the amazing talent of the diverse cast.

Its feminist and antiracism undertones aside, this play leaves nothing to be desired in terms of spectacle. Nostalgia for the era of the greatest generation exists for many Americans, and South Pacific transports the audience there. City Springs Theatre Company has successfully produced this classic piece and set the tone for the remainder of its season.