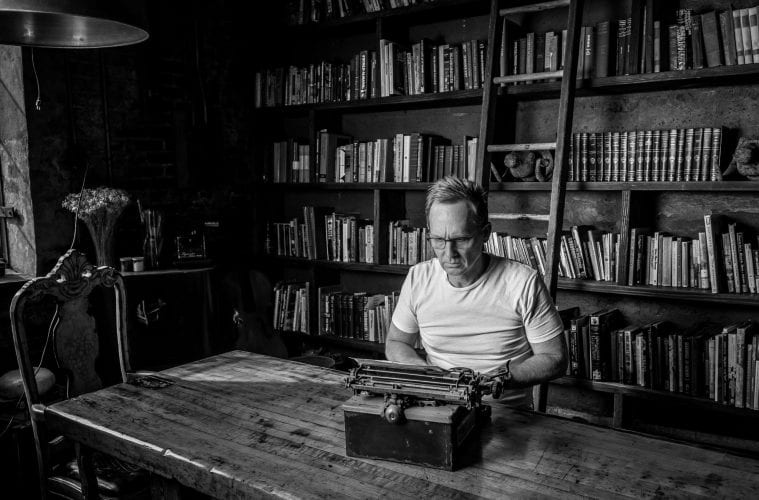 His work tends to resonate everywhere it plays, but Atlanta is especially receptive to the characters brought to life by Del Shores.

The playwright, best known for stage, film and television versions of his Sordid Lives, returns to Atlanta May 20 with Six Characters in Search of a Play, his new one-man show to be performed at Out Front Theatre Company. It’s something of a Shores weekend at the company: Shores will also be present at Saturday and Sunday performances of Out Front’s current version of Sordid Lives, this time with an African American cast, as well as a screening of the film version’s sequel, A Very Sordid Wedding, on May 19.

Shores started Six Characters last year as he was touring the country with Wedding. “I was talking to [actress] Ann Walker and [producer and actor] Emerson Collins on the road and telling them these stories,” he recalls. “Ann told me I had to include them in something. I thought about a few of the stories I had collected. I had them in a bag, waiting for them to be pulled out into a project. The show is a riff on Pirandello’s title, but it has been hard to keep it at six. Once I got that settled, I committed to the ones I wound up with.” These are all based on actual people Shores has met over the years. The centerpiece, though, is Loraine, based on Shores’ own mother. “It’s about when she lost her mind,” he says. “It wasn’t just ha-ha funny. It felt like it had more weight. My mother’s hallucinations were so vivid and real to her, but they were tragic.”

He worked on the production for about six months, had a few soft openings last year and eventually launched Six Characters with a four-night gig in Dallas. After spending a significant chunk of time writing and traveling with Wedding, getting back to birthing a new play has been welcome.

“I had such a good run when I was doing stand-up, but getting back to theater and performing has been nice,” says Shores. “My muscle was stand-up. I had a map; I told the stories I wanted to, as they came out. Doing this, I had to make all these characters distinct so you see and feel them. It has evolved, and now it feels like a play.”

Shores’ first produced play was 1984’s Cheatin’. He looks back now and refers to it as his “juvenile play.” “It was a lot of fun, but there wasn’t much meat to it,” he says. “I wrote that in response to not getting good roles as an actor. I was on Days of Our Lives as a bartender, and the role was cut before we shot it. I decided to write a play I could be in as well as my friends.”

He followed that three years later with Daddy’s Dyin’: Who’s Got the Will, which was later adapted into a film. Shores has also written for TV shows such as Dharma & Greg, Touched by an Angel and Queer as Folk, where he worked for three seasons.

Yet writing for television and the stage have proven to be radically different. “The beauty of writing a play is that the playwright is God. You own and control all the words. In TV, you must be willing to collaborate and let your ego go. There are always people who are going to rewrite you. Gary David Goldberg, who created Family Ties, was the first person to hire me, and he saw Daddy. He told me he wanted me to always return to the theater because it will always be yours. He told me that television will never be yours, but those checks are good!”

Goldberg also suggested to Shores that whatever office he wound up in, to put his plays out so that when he was frustrated, he could literally put his hands on them and claim full ownership. “It was the best advice and the greatest gift of my career,” Shores admits. Del Shores says he had no idea Sordid Lives would take off the way it did. (Photo by Jason Grindle)

Shores’ fourth play was 1996’s Sordid Lives, about a family dealing with the death of the family matriarch after she’d had an affair with a younger man. With colorful characters such as Brother Boy — a gay man obsessed with Tammy Wynette — it caught on and led to a 2000 film, a 2008 television show and a 2017 sequel.

He had no idea Sordid Lives would become a cult classic. “I thought I was going to have a nice indie film that was going to get in a few film festivals,” he recalls. “I had no idea. I realized the power of Sordid Lives in Palm Springs. It ran a year there. We came down for the anniversary, and people were dressed as the characters and were literally saying the lines out loud. I realized that it had taken off in a different way. I filmed it in 1999, and I had no idea I’d still be appearing because of it.”

The playwright’s fan base in Atlanta is rabid. “Before Facebook, I had no idea where the fan base was,” he says. “Atlanta is always one, two or three, with Dallas and Los Angeles. The first time I realized it was right after we filmed the series. We appeared at Gay Pride events around the country, and that was the first time I saw how crazy Atlanta was for us. They ‘get’ me. I think gay audiences have shared Sordid Lives with their straight friends. My demographic is not just a gay audience.”

The new play he is working on is This Side of Crazy, about a prolific gospel songwriter and a forced family reunion, of sorts, with her three daughters. He hopes to have that ready for next year.

Shores tries to write every day, even when he is on the road.  “I get up, I see what crazy [expletive] Trump has tweeted, check emails and then write for two hours.”

Looking back at Cheatin’, he sees how he has grown over the last 30+ years, and how he has learned to fine-tune his characters. “I teach playwriting, and I have learned to scratch deeper and understand the psychology of characters. I must find out why they do things. I really have to understand what I write more.”