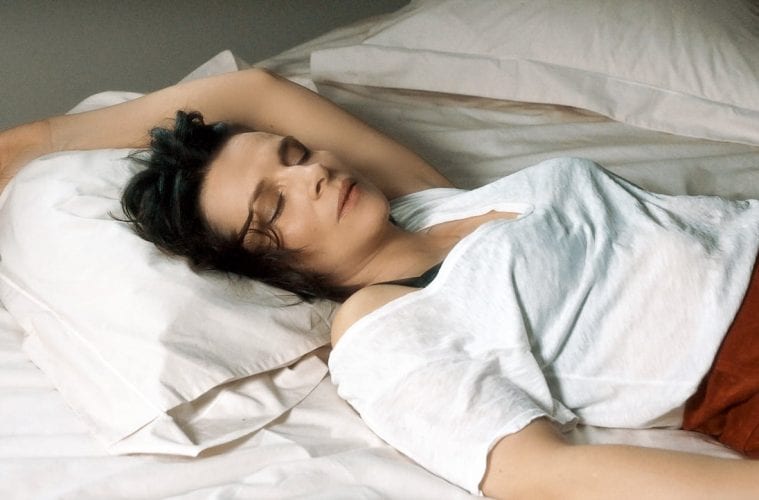 Steve MurrayMay 18, 2018
Film+TV
It’s a strange thing that occurs more often than you’d think: a not-very-good movie is salvaged by its actors. That’s what happens in Anything, though that’s hardly enough to make me wholeheartedly endorse the new film.
You may remember a whiff of controversy that attended the casting of this small indie. Openly gay, cisgender male actor Matt Bomer was cast as Freda, a transgender hooker working L.A.’s Santa Monica Boulevard. As Sean Baker’s recent indie hit Tangerine proved, it’s easy enough to cast actual trans actors in these roles.
Bomer is fine, for the record, though the character is a little overly refined and well-put-together to feel completely plausible. Better is John Carroll Lynch in this fish-out-of-water, odd-couple comedy-romance.
He plays Early, a small-town Southern insurance agent driven into deep depression by the sudden death of his wife of 26 years. Moving to L.A. for a fresh start, he first bunks with his sister Laurette (Maura Tierney) in the sleek hillside home she shares with her husband and teenage son. Eventually, though, Early itches for a place of his own, and rents a modest apartment in an old complex in a sketchier patch of Hollywood.
His neighbors include an unseen mailman, a fellow widower who gets drunk and sings his grief away from a basement apartment; Brianna (Margot Bingham), a talented musician with bad taste in men; and Freda, who knocks on the door to borrow some sugar, learns that Early is from the Deep South, and tries to shock him by purring, “I like things deep, know what I mean?” At first it’s not clear if Early realizes Freda is trans. Ultimately it doesn’t matter. The two bond over cocktails, the razor scars they share from suicide attempts, and recognition of other things they share, like loneliness and vulnerability. Wisely, writer-director Timothy McNeil (barely opening up his original stage play) doesn’t ruin things with any broad, oh-my-gosh-she’s-a-man moments. He does, however, include an over-the-top withdrawal scene for Freda, when Early insists both of them go cold-turkey on their prescription meds.

As I said, Bomer is fine in a pleasant but not deeply textured performance, while Lynch brings to his nice-guy portrayal occasional hints of the subterranean danger he brought to his small but indelible role as a prime suspect in David Fincher’s Zodiac. The actor who draws the short straw here is Tierney as Early’s overprotective sister. A melodramatic dinner scene requires her to erupt with the sort of prejudice against transgender Freda that seems unlikely from an L.A. professional who works in development at a major entertainment company; she would presumably have a broader worldview. Tierney gives it her best, but it’s a nearly impossible scene to play.
Spoiler Alert: Anything, one of the worst-named movies I’ve encountered in a while, gets its title from the very last word spoken in the script. (That’s the sort of thing that can happen when a writer gets to adapt his own play for the screen.) It’s a nice moment for the viewer when the meaning arrives. But like most of the movie, you’re likely to forget it as soon as the credits roll.
Opening May 25, Let the Sunshine In is primarily a chance to enjoy watching Juliette Binoche totter in perilously tall stiletto heels from one Parisian bed to another while complaining about relationships she’s had and is having. It’s very French, which is to be expected from longtime director Claire Denis (White Material, 35 Shots of Rum, Beau Travail).
In her career, Binoche has played a classical composer (Three Colors: Blue), a film and theater star (Clouds of Sils Maria), a choreographer (Polina) and a sculptor (Camille Claudel). To her collection of onscreen artists she adds a painter named Isabelle. Well, we see her painting once, anyway. She’s also a divorced mom and talks about custody of her 10-year-old, but we only glimpse the girl briefly through a car window. Mostly, Isabelle wanders through the bistros, galleries and bars of Paris.
Like other Denis movies, this one comes to us in chronological fragments. It’s the portrait of a woman yearning for true love but incapable of not sabotaging (by word or deed) the interactions we witness her having with assorted men. Those include a couple of repellent encounters with a hefty married lover (Xavier Beauvois), whose smug self-confidence seems to be in direct inverse proportion to his attractiveness; a nice man named Marc (an underused Alex Descas, from 35 Shots of Rum); and a famous, unnamed actor (Nicolas Duvauchelle of White Material).
The chapter focusing on Isabelle and the actor is the film’s most interesting. They’re supposed to be collaborating on some unnamed art-theater project, but the centerpiece of their scenes together is a long, passive-aggressive seduction, spearheaded by Isabelle, to get him to come up to her apartment after dinner and into her bed. It’s a nicely acted pas de deux.
Of course, this relationship is transitory and doomed, like the others. As Isabelle makes continued bad choices, it gets harder to care about the romantic dissatisfactions of a talented, white, heterosexual woman in Paris. Any cinematic immersion in that city has its pleasures, but by the time Gérard Depardieu shows up as some sort of relationship guru, launching into a tedious monologue like most of the other characters, it’s time to return home.
At the end of one of the extended, self-absorbed dialogues she shares with a bedmate, Isabelle says, “It feels good to stop all that talking.” Viewers will likely feel the same way.
Anything. With John Carroll Lynch, Matt Bomer, Maura Tierney. Written and directed by Timothy McNeil. Rated R. 94 minutes. At the Plaza.
Let the Sunshine In. Opens May 25. With Juliette Binoche, Nicolas Duvauchelle, Xavier Beauvois, Gérard Depardieu. Directed by Claire Denis. Unrated. 94 minutes. At Landmark Midtown Art Cinema.