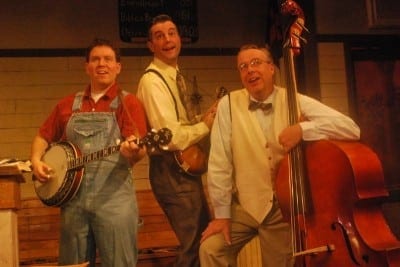 Review: “Smoke on the Mountain” at Theatre in the Square

Editor’s note: I like these daily introductions. Today we’re honored to announce that Eleanor Ringel Cater will join Steve Murray and Wendell Brock reviewing theater for ArtscriticATL.
Eleanor is a familiar presence on Atlanta’s arts scene. In addition to radio and television work and a column for TV Guide, she was The Atlanta Journal-Constitution’s chief film critic for 29 years.
But a theater critic for ArtscriticATL? Theater was her major at Brown University, and she was a member of Playwright’s Unit at the Public Theatre under Joe Papp and has acted in various regional companies around the Southeast. We welcome her to the group. Contact us at ArtscriticATL [at] gmail [dot] com — Pierre

That’s how I walked into Theatre in the Square’s “Smoke on the Mountain,” a show that was originally produced in the early ‘90s and has since spawned two sequels, “Sanders Family Christmas” and “Mount Pleasant Homecoming.”

See, I was otherwise engaged with Eastwood, Spielberg, Scorsese and their crowd. So I’ve missed a lot of theater in the last, oh, two or three decades. Time to catch up.

“Smoke on the Mountain” isn’t a bad place to begin. The Depression is in full swing and so are the Sanders Family Singers. They’ve arrived at Mount Pleasant Baptist Church for a little singin’, no dancin’ (we’re Baptist, thanks) and a whole heap of that old time religion.

Their host (and, per the musical play’s conceit, ours), is Rev. Mervin Oglethorpe (Alan Kilpatrick), the kind of glad-handing preacher who welcomes us with, “Can I get an Amen?”

Absolutely. Plus some clappin’ and even a bit of foot stompin’ (sorry; a show like this just makes you want to leave off the “g’s” when you’re writin’…er, writing…about it).

Little more than a mock-up of a gospel revival during which every Sanders gets at least several songs and a revealing and/or comic monologue, the show is what is known in the biz as a certified crowd-pleaser. The company is more than capable and admirably comfortable both with themselves and a wide range of instruments (though nobody tops Patti LuPone toting around a tuba in the Broadway revival of “Sweeney Todd.”)

But we’re not talking “Sweeney Todd” here or even “Della’s Diner.” “Smoke on the Mountain,” with its combination of traditional music and knee-slapping humor is deliberately (and quite successfully) slanted at those who’d rather hee-haw than quietly giggle. The performances are simultaneously broad and pin-point. I don’t think anyone misses a note or a punchline. (Upper photo: Mark W. Schroeder, Rob Lawhon and JP Peterson; photos by MJ Conboy.)

The plainspoken set, originally designed by Dex Edwards, makes a fine background for the faux-naïve goings-on. The costumes, by J.P. Paterson are straight out of Porter Wagner (or perhaps Dog Patch) and J. Montgomery Schuth’s wigs are as witty, in their way, as something out of a Restoration play.

Kilpatrick and Karen Howell, who also plays Ma…er…Vera Sanders, co-directed as if they could do it blind-folded (and probably they could) and Michael Monroe provides the pitch-perfect musical direction.

As for the cast, J.P. Peterson is steady as she goes as the family patriarch; he’s also someone who just looks RIGHT behind a huge upright bass. Pretty little Laura Floyd and her very pretty big voice perhaps overshadow her “twin“ played by Mark W. Schroeder, but the true scene-stealers are Rob Lawhon as Uncle Stanley, the Sanders with a slightly darker past, and Jennifer Akin as the mostly silent Sanders, who signs rather than sings and provides an amazing array of sound effects. (Lower photo, Alan Kilpatrick and Jennifer Akin.)

Let me be clear here. “Smoke on the Mountain” isn’t for everyone. It’s broadly done and self-consciously cute (when Howell did her monologue comparing Jesus’ love to a thread tied to a junebug, I came very close to feigning stomach flu and rushing for the door). Still, you have to admire a show that achieves so completely what it sets out to achieve. And besides, where else are you goin’…I mean, going to learn how to say “blood of the lamb” in sign language?

Overheard from the audience during intermission:

–“You come here eating and supporting the theatre and they’re going to give you a ticket for parking 2 ½
hours in a 2 hour space. I love government.” (A comment on the peculiarities of the Marietta police department).