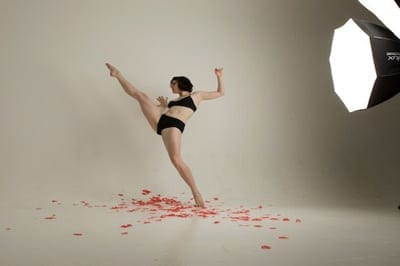 Editor’s Note: We’re delighted to introduce ArtscriticATL’s new dance critic, Cynthia Bond Perry.
She studied dance at NYU and the University of Oklahoma, earning a master’s degree in dance with work in ballet and modern techniques, and she’s danced professionally in New York and elsewhere. Her writings have appeared in Dance Magazine, among other publications. Cynthia and her husband moved to Atlanta a year ago, and she currently teaches dance at Kennesaw State University. We welcome your comments.– Pierre

Though the Woodruff Arts Center’s new Expansion Master Plan has no start date, the cultural hub is already redefining itself. Last Saturday, a flock of 24 young dancers splashed their signatures across the center’s plaza with a fluid, pulsating, contemporary dance language. In Pied Piper fashion, the group led spectators down the campus lawn, around the Memorial Arts Building and into Symphony Hall.

The event was the culmination of the inaugural summer Intensive workshop of gloATL, a collaborative performance group created by Atlanta-based choreographer Lauri Stallings. On July 24 and 25, the Alliance Theatre plans to present “rapt” — Stallings loves lower-case titles — gloATL’s first site-specific multimedia work, at dusk on the Woodruff Arts Center plaza.

Consistent with the arts center’s ambition to become a “must-see” destination, the gloATL outdoor project will help increase arts awareness by making the campus a more accessible and pedestrian-friendly gathering place, according to WAC Vice President of Institutional Marketing Virginia Vann.

Stallings says glo is a Dutch term meaning “a group of individuals who congregate to witness a unique event.”

GloATL collaborators include the design team from the spring 2008 Atlanta Ballet production of “big,” including videographer Adam Larsen and lighting designer Ryan O’Gara. Former Atlanta Ballet wardrobe mistress April McCoy — now designing for movies out of Boston — will costume the dancers. A compilation of classical music and contemporary sound that is “in spirit with Big Boi and OutKast,” says Stallings, will accompany the work.

The basic idea, says Stallings, is to turn the Woodruff Arts Center “inside out.” At nightfall, video and light projections will saturate grounds and building walls with soft pastel hues based on French Impressionist paintings (a reflection of the current Monet exhibit). Later, a video recording of Atlanta Symphony music director Robert Spano conducting music by Stravinsky (featured prominently in the ASO’s upcoming season) will surround choreography inspired by Spano’s conducting. Faces of the diverse people Atlanta, plus lots of live-fed dance, will be projected on the walls.

In a way, Stallings seems to have turned the classical ballet vocabulary inside out. Though not always visible, one senses its presence and glimpses it in fluid, controlled transitions, in fully extended yet off-balance lines, and turns that shift off-center. But Stallings seems to have dug deeper into the body to discover a succession of impulses arising from different places, organically bypassing the lines of classicism without leaving that framework entirely.

The premiere of “rapt” is the auspicious union of all three legs of the stool that make up gloATL, as Stallings puts it — the professional performance group, educational residencies like the Summer Intensive, and site-specific events. Out of about 20 dancers, seven of them are part of gloATL’s professional company. The other dozen or so are students recruited from the Intensive.

At the heart of Stallings’ teaching and choreography is a technique called “mapping,” based on Tel-Aviv-based choreographer Ohad Naharin’s “Gaga” technique. Like Naharin, Stallings (at left) used the technique to overcome injuries that could have ended her career. She describes the system that uses sensory imagery to help dancers to find a wellspring of fresh, individualized movement within the body. The technique frees dancers from technical training conventions by giving them fresh movement choices.

In other cities, Gaga is already a craze, and Stallings stresses the value of teaching it to the next generation: “Let’s give it to them early, because this is where dance is. It’s important that we begin to open ourselves to possibilities,” she says, “because this is a time when we’re reinventing ourselves as a culture, as a country, and in a sense, we’re reinventing the world.”