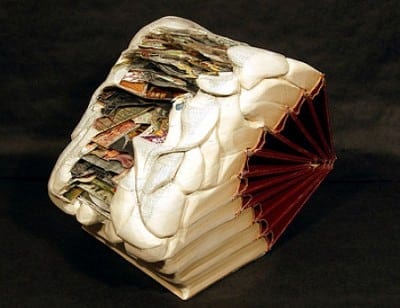 Brian Dettmer: Under the radar no more

I’m going to get a little kinky here.

But first let me say that Brian Dettmer’s altered-book sculptures, which I review in today’s AJC, are first-rate, both intellectually provocative and aesthetically exciting. His reputation beyond Georgia exceeds home-town recognition, perhaps because he hasn’t had gallery representation here. That should change now that Saltworks will handle his work.
“Fate Far Fast Fall Final,” formerly Webster’s Second International Dictionary, is an intricate layered composition of solids and voids. The title, a string of words he unearthed in his excavations, eerily suggests state of printed matter in the Internet era. But Dettmer steps in to rescue this dictionary. As I wrote in my review, “his sculpture gives hard copy a new life and affirms the ageless allure of the object.”
Each piece is a complex little world; exploring it is an experience akin to stepping into the wardrobe and coming out in Narnia. Unlike snowbound Narnia, though, some of these worlds give off heat. By which I mean, well, a whiff of S&M.
This thought first occurred to me while looking at pictures of his studio, where books lay on tables, trussed up with clamps, string and other devices. It reminded me of visiting the gynecologist. (Not literally S&M but close.)
Then I reconsidered “Soft Standards,” a piece now at Saltworks. Dettmer had pulled the covers of three volumes back — like tying someone’s arms behind her back!– so that the pages fanned out, and carved them up with his Exacto knife. Hmm…
For the Freudians among you, this could be a classic example of sublimation (his) or projection (mine). Whatever. Art that works your imagination is definitely a pleasure.