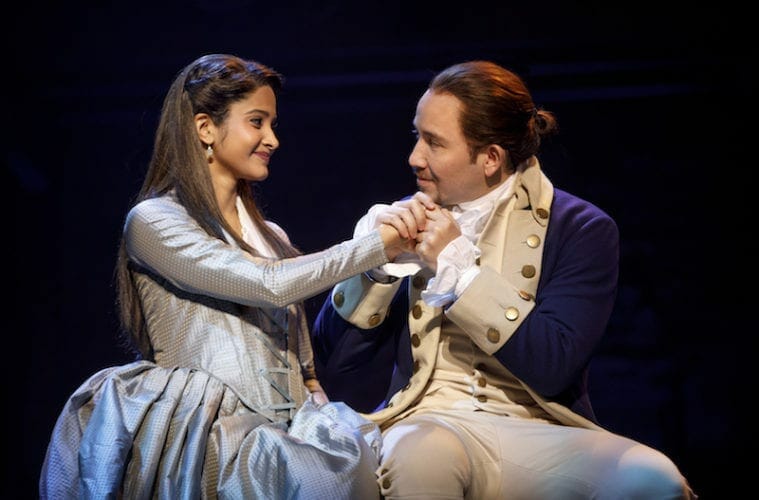 Shoba Narayan and Joseph Morales as Eliza and Alexander Hamilton in the national tour of "Hamilton." (Photo by Joan Marcus)

Single tickets for Hamilton at the Fox Theatre will go on sale at 10 a.m. Thursday (July 8). The multi-Tony-Award-winning musical will play the Midtown landmark from August 22 through September 26. Tickets HERE.

Hamilton first visited the Fox in May–June 2018 in a much shorter sit-down than the one now planned. This Fox visit, the show’s second, was originally scheduled for March–May 2020, bumped by COVID-19, rescheduled for August–September 2020 and ultimately postponed again. The newly announced five-week run seems to be as sure a thing as we get in the age of COVID.

As it was in its first Fox visit, Lin-Manuel Miranda’s masterpiece is expected to be a rainmaker for the 4,665-seat Fox. The Broadway original earned the Pulitzer Prize for Drama, a special Kennedy Center honor and 11 Tony awards, including best musical and one each for Miranda’s book and score.

In his review of the 2018 tour, ArtsATL cofounder Pierre Ruhe wrote: “When it first caught Broadway’s attention in 2015, Hamilton was hyped as the musical where the Founding Fathers were portrayed by men of color, dancing and rapping to a hip-hop beat. That turns out to be just one remarkable aspect. In Miranda’s view, American divisions of high/low, Black/White and Anglo/immigrant are blurred or ignored altogether. Biggie Smalls, Shakespeare, Beyoncé, Gilbert & Sullivan, Grandmaster Flash (and a dozen more) all get a nod of literary and musical appreciation.”

The Broadway production is scheduled to reopen at the Richard Rodgers Theatre on September 14.