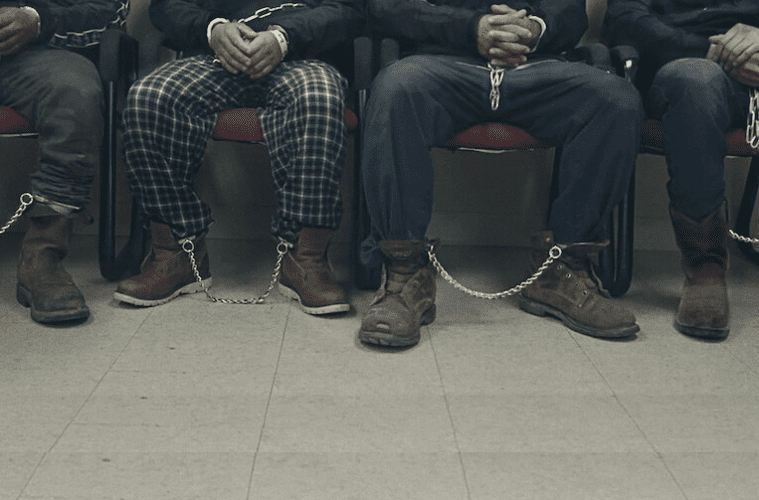 Netflix's "Immigration Nation" is a difficult series to watch, says critic Steve Murray, but an important look at the lives and frustrations of immigrants, and hardline tactics of Immigration and Customs Enforcement agents.

Limited documentary series can be the best things to binge-watch in these trying times. But maybe it’s because these times are so trying that I offer this backward compliment to Netflix’s Immigration Nation: I watched only the first three of its six hourlong episodes. I couldn’t take any more.

Nation takes a deep dive into the lives and frustrations of immigrants seeking refuge in the United States and the Immigration and Customs Enforcement agents who keep them in prisons or in limbo. It puts names and faces to people that the White House has tried to turn into an anonymous brown blur. We first meet Josue, a Honduran, 27 days after he’s been forcibly separated from his 3-year-old son, whose whereabouts no one will share. Another man, separated from his daughter, is eventually reunited — but the girl seems visibly, irreversibly traumatized. And Carlos, a former El Salvadoran cop who left to escape gang retribution, has remade himself as a plumber but is threatened with deportation. “If there’s somebody who should be in this country legally, it should be him,” an American police officer says. Nevertheless, Carlos is taken into custody. “I don’t remove anybody,” a smiling Homeland Security officer says. “The judge does.”

You’ll hear variations on that old Nazi-era refrain repeated multiple times by ICE agents: I’m just doing my job. Becca Heller, a human rights lawyer with the International Refugee Assistance Project, has almost grudging admiration for the machinery created by the government, designed so that bureaucratic employees don’t see the result of their seemingly innocent cog-work. It’s a system, she says, in which “an incredible amount of terror and trauma results, but most people are completely divorced from that.”

There’s a reason — though they cooperated with filmmakers — that ICE doesn’t want people to watch Immigration Nation and why you should. Or at least, like me, as much as you can stomach.

Another fascinating documentary series is Indian Matchmaking (eight episodes). It follows professional matchmaker Sima Taparia from her home base in India around the globe to pair eligible men and women of South Asian descent, many of them pushed toward marriage by their anxious, wealthy parents. Her clients include a handsome, vain amateur chef who seems more interested in nouveau cuisine than women; a spoiled and passive fellow who only wants a girl as controlling as his mother; an overachieving but fatally judgmental female attorney, and so on. You hope some of them find the right partner, while others seem unworthy of being paired up.

It would be inappropriate to judge or critique some of the time-honored rituals of the arranged-marriage tradition. But uncomfortable issues of caste, nationality and skin color arise, and there are some cringe-worthy moments for anyone not familiar with the concept. Worth sampling, if only for a quick sociocultural lesson or two.

NETFLIX | Love on the Spectrum

Another romance-minded series, Love on the Spectrum (five episodes), is a genuinely sweet and affirmative window on the lives of young people navigating the world with some degree of autism and trying to find a love match. The Australian series is respectful and affectionate toward its subjects, and sometimes it’s very moving as we root for these folks to find partners.

To my surprise/relief, I got more positive feedback than ridicule for highlighting the charming reboot of The Baby-Sitter’s Club in last month’s roundup. Maybe I’m getting soft as I get older, but I also enjoyed the Atlanta-shot (and set) Teenage Bounty Hunters (10 episodes). Also girl-centric, but on the older, snarkier side, it stars Maddie Phillips and Anjelica Bette Fellini as Sterling and Blair, Buckhead high-schoolers enrolled in an upright Christian school but actively curious about sex with their boyfriends.

Though they live in a luxe mini-mansion, the girls are desperate to raise funds to repair the damage done to their dad’s truck when they secretly drove it. So, entirely by accident, they find themselves working with Bowser (the affable Kadeem Hardison), a bounty hunter with a sideline in frozen yogurt. Believable? No. But Bounty Hunters is tart yet affectionate, sending up the sweet, shiny, bless-your-heart hypocrisy of Southern culture (and faith-and-abstinence focused private schools). I liked the series more than I expected to, and not just because it’s a local production.

I was really looking forward to the latest film from Charlie Kaufman (Being John Malkovich, Adaptation, etc.) but got a whole lot more and a whole lot less than what I hoped for. His adaptation of Canadian writer Iain Reid’s acclaimed 2016 novel, I’m Thinking of Ending Things, starts streaming September 4, and I wish I could tell you it’s worth the wait.

A meta-puzzle with an unreliable narrator, it’s the snowy, Midwestern tale of an unnamed Young Woman (the always interesting Irish actor Jessie Buckley) on a road trip with newish boyfriend Jake (Jesse Plemons) to meet his folks for the first time. Since they’re played by Toni Collette and David Thewlis, you can expect things to get quirky, and do they ever as the film buries itself endlessly in dream logic. At the parents’ house, the Young Woman’s clothes and jewelry change from scene to scene. People vanish from rooms without warning. Dad’s bandage creeps from one side of his head to another. Mom is aggressively ditzy at dinner, then shortly thereafter has dementia and is confined to a hospital bed in the living room.

Dream logic is interesting, but there’s a reason most dreams visit us in short bursts. Kaufman’s film is 134 minutes long and feels it. The visit to Jake’s old home seems to last forever but even longer are the claustrophobic car rides to and from. The Young Woman and Jake talk endlessly about Wordsworth’s poetry or John Cassavetes 1974 film A Woman Under the Influence (Buckley not only mimics Gena Rowland’s performance, she recites famed critic Pauline Kael’s dismissive review).

The result of all this is a deep, agonizing sense of self-indulgence on the part of Kaufman, whose recently published novel, Antkind, has been criticized as overlong, exhaustingly absurdist and for essentially disappearing up its own metaphoric chowder hole. Ending Things reminds me of several films whose long-withheld narrative secrets spill out in the final scenes. They’re often disappointing after the big reveal, but at least you understand the filmmakers’ game. After watching this new movie, I had to check the book’s Wikipedia synopsis and get further clarification from a friend who’d read the novel. A film that indulges in such a long running time to reveal its mysteries shouldn’t leave you so puzzled when the credits roll. By the time the long-delayed Ending Things ends, you may regret ever starting it.

Much better, and much shorter, the French-Italian film An Easy Girl begins by teasing you to expect a throwback, soft-core idyll about the sort of busty dreamgirl once found only in European movies. It’s much slyer than that. In Rebecca Zlotowski’s film, Mina Farid plays Naīma, a 16-year-old on summer vacation in Cannes, where she connects with her 22-year-old cousin Sofia (Zahia Dehar), a pouty, overripe beauty who’s finds it perfectly fine when horny older men wine, dine and give her gifts (she never carries cash). As Naīma follows Sofia around, especially when Sofia gets the attention of two older men in a yacht, you might expect some sort of slut-shaming to ensue. But Girl has more on its mind. Sofia isn’t as simple as she looks, and Naīma learns a lot about the performative aspects of femininity in this unique coming-of-age tale.

Chemical Hearts, another new film, may not distinguish itself among the glut of movies about sensitive high-schoolers enjoying romance and emotional challenges, but its leads have charm and chemistry. Henry (Austin Abrams) and transfer student Grace (Lili Reinhart) are thrown together as co-editors of the student newspaper. She has a limp, and carries an air of mystery with her — something to do with an old boyfriend and a tragic accident at her old high school. The movie is a good reminder of how intensely life can be lived in adolescence, especially when there’s first love involved. Worth a look.

Also worth a look but only with closed-captioning and only if you’re looking for something silly and loud. The Scotland-set comedy Get Duked focuses on four teenage boys — three of them truants, one of them virtuous — sent into the wild Highlands for a character-building adventure. Problem is, a couple of crazed people (one played by Eddie Izzard) have taken to tracking and trying to murder students sent on this competition. An even bigger problem (for me) is that I was sent an early-screening link that didn’t include the caption option; the Scottish accents were too thick, so I only survived the first 15 minutes. Captions or not, that will probably be long enough to know if this movie is for you.

Anyone with a love of movie musicals, particularly the animated renaissance begun by Disney’s The Little Mermaid, will want to watch the documentary feature Howard. It’s the triumphant, tragic story of Howard Ashman, the lyricist and musical book writer who partnered with composer Alan Menken to make the improbable, hummable whatzit Little Shop of Horrors before being lured to Los Angeles. After great success with Disney, would the team ever return to the New York stage? We’ll never know, because Ashman died in 1991 from AIDS complications, shortly after the two finished Beauty and the Beast. He was 40.

HBO | I May Destroy You

I mentioned this last month, but if you’re an HBO subscriber and haven’t already been watching, the 12-episode I May Destroy You is truly a must-see. Created, written by and starring Michaela Coel, it’s the actor’s fictionalized account of dealing with the aftermath of sexual assault when her drink was spiked at a bar. Can Coel’s alter ego, Arabella, remember who the perp was? Track him down? Enact vengeance? Around this core quest, Cole piles a dizzying array of questions about sexual consent. Each episode detonates at least one major emotional, intellectual or cultural surprise. It’s really unlike anything else I’ve seen, in a time unlike any we have lived through. Happy viewing, and stay safe, everybody.