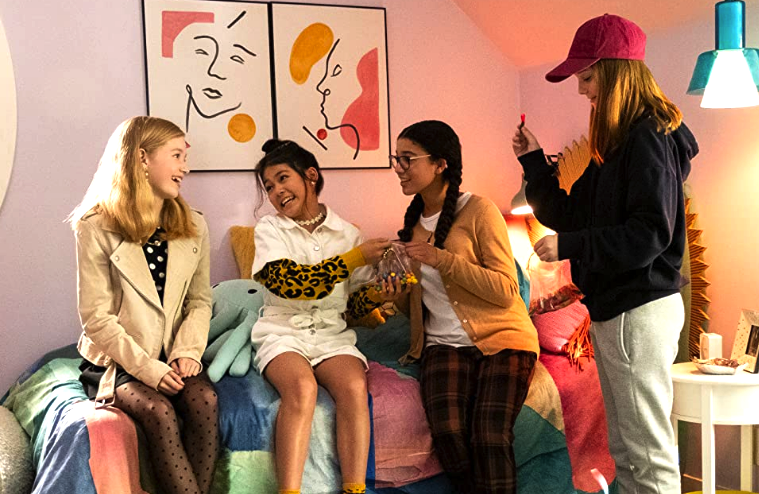 Go ahead and laugh, but for me the nicest new surprise on Netflix is the reboot of that old tween standard, The Baby-Sitters Club. Previous versions of Ann M. Martin’s book series (1986–2000) included a 1990 HBO series and a ’95 film, neither held in high regard.

Reimagined for the 21st century, with artists like Lizzo on the soundtrack, the semi–comic series focuses on some expected issues, like the girl who has to learn to curb her control issues and apologize to her friends. There are fresher notes struck, too: dealing with health issues (one of the club members has diabetes) and standing up for transgender rights, when one of the girls’ babysitting charges is a biological boy but is, in her heart and soul, a girl.

This is not a “woke” rendition of Baby-Sitters, just a smart and sensitive one. Yes, there’s a tidy life lesson at the end of each episode. But each feels earned and well considered. I’ve only watched half of the 10-episode series; I honestly want to delay the pleasure of seeing the whole thing.

On a more serious, real-world note, Netflix’s six-episode drama Stateless is worth a look, but it’s an uneven, fictional take on a situation that only seems to worsen around the globe. Based on actual, reported events, the limited series focuses on Australia’s detention system for undocumented people arriving in search of a better life.

Four stories are at its heart. Ameer (the sympathetic Fayssal Bazzi) has fled Afghanistan with his wife and two daughters but finds himself at a detention center with only one of the girls. The fraught circumstances of how he paid for his boat passage pose a threat to securing an Australian visa.

Cam (Jai Courtney) is an Aussie who’s just signed on as a guard at the facility and finds himself increasingly uneasy with the brutal tactics of his colleagues (especially Rachel House, horribly superb as a sadistic superior). Likewise, though she’s been flown in to crack down on any irregularities, bureaucrat Clare (Asher Keddie) starts to question her own actions as she tries to fend off protesters and journalists concerned with the nation’s immigration policy.

Another detainee, Eva (Yvonne Strahovski), is a German tourist who’s lost her passport and . . . no, that’s a lie. “Eva” is actually an Australian citizen named Sofie. She’s mentally unstable and seeking a new start after being sent over the edge by a predatory pair of “self-help” gurus (series co-creator Cate Blanchett, camping it up in a small role, and Dominic West).

Yes, that last storyline sounds strange. Even though it’s based on a true-life Australian case, the white-lady-in-peril as a lens to explore the broader picture of immigration dysfunction is Stateless’ weakest thread. The series is very well made, though. If nothing else, it makes you look forward to the day, probably years from now, when a long-form documentary or fictional series tackles the disturbing tangle that is U.S. immigration policy today.

Netflix is also streaming two original genre flicks — a super-dumb comedy and a superhero saga. Usually I’m all for the comedy, but this time the superhero title, The Old Guard, far upstages the new Will Ferrell shtick. So let’s get him out of the way.

In Eurovision Song Contest: The Story of Fire Saga, Will Ferrell plays opposite a game Rachel McAdams as lifelong friends from Iceland who dream of making it to the annual singing contest of the title. Filled with broad slapstick, silly accents and cameos by some of the peculiar, real-life Eurovision winners, Contest is amiably dumb but overlong and clumsily made. (Director David Dobkin is the same guy who gave us 2007’s lousy Fred Claus.) The movie’s main failure is Ferrell, who’s too old and too far removed from his Elf heyday to be using the same faux naïf notes. The only real laughs are earned by Dan Stevens as a preening Russian contestant with a penchant for nude male statuary.

In The Old Guard, the endlessly watchable and often brilliant Charlize Theron proves, as she did in Atomic Blonde and Mad Max: Fury Road, that she can elevate even the dumbest material. Actually, other than the endless fusillade of bullets that it succumbs to near the end like other examples of the genre, Guard is often smarter than you’d expect.

Tightly directed by Gina Prince-Bythewood, Theron plays Andy, an ancient immortal teamed with three fellows who, likewise, simply can’t be killed. They’ve worked together through the centuries, trying to make the world a better place while hiding traces of their own deathless existence. Guard kicks off with the discovery of yet another of their kind, an American soldier named Nile (KiKi Layne), whom they have to train while avoiding a big-pharma billionaire who wants to capture and monetize their DNA.

Some of the action beats here are overly familiar, but there’s a gratifyingly fresh texture to the characters’ profiles: a world-weary female leader, a young African American female recruit and  two hopelessly devoted gay men. (In what may be a meet–cute for the ages, they met while fighting on opposing sides during the Crusades.)

Netflix also offers two fantasy series centered on strong young women with extraordinary powers. Set in the present day and heavy on snark, Warrior Nun gives us Ava (Alba Baptista), who lives a short, sad life as a quadriplegic orphan, dies, then is reborn thanks to an angelic halo implanted in her back by a cluster of ninja-like young women who are battling the forces of hell. Nun wants to be a Buffy the Vampire Slayer for a new age, but it suffers from weaker wit and inventiveness. The special effects (introducing us to Wraith Demons and monsters known as Taraks) are so–so, and scenes of massive fights and gunfire somehow happen without drawing attention from local citizenry or police.

Cursed, based on a Frank Miller graphic novel, puts a new spin on the King Arthur legend, this time focusing on the Lady in the Lake-to-be, a magical young woman named Nimue (Katherine Langford). Her kind are targeted for genocide by the fanatical Christian sect, the Red Paladins, led by the always good Peter Mullan (who isn’t very challenged by his role). Nimue has to deliver a so–called Sword of Power to someone named Merlin. Before she can, though, her path crosses with young Arthur (Devon Terrell, who’s hunky, biracial and a little dull). Nimue must also try to control her magic powers, which erupt against her will, along the lines of Stephen King’s Carrie. Like Warrior Nun, Cursed  has potential and problems in equal measure. What should be a rattling good tale has a sluggish pulse. The only reliable enjoyment comes from Gustaf Skarsgård as a powerless, drunken Merlin, but even his shtick becomes repetitive.

After watching the first three episodes of both Warrior Nun and Cursed, I’d seen enough. I could have watched more, but I was happy to walk away. Younger, female viewers might click more readily with the shows than I did . . . although, remember, I’m a Baby-Sitters fan.

For entirely frivolous, calorie-free fun, the latest Netflix guilty pleasure is Floor Is Lava, wherein — like bored children stuck indoors and left to their own imaginations — contestants must navigate obstacle course rooms flooded with bubbling, orange water. They don’t burn to death if they fall in, but they are eliminated from the game. The first episode has one contestant delivering this deathless line, cheering on his mother: “Mom, you do Pilates for a reason!”

Also dumb fun, but likelier to give you a headache by the end of its six episodes, Amazon’s LOL: Last One Laughing Australia locks 10 Aussie comics in the same suite for six hours. Overseen by Rebel Wilson, via a bank of CCTV monitors, the cutups try to make each other giggle or guffaw. Only the one who manages to keep a straight face by the end wins $100K. Brace yourself for plenty of scatological humor and some unwanted glimpses of nudity.

HBO | I May Destroy You

Funny in parts, but mostly deadly serious, HBO’s I May Destroy You is the uneasy conversation starter of the summer. Writer, director and star Michaela Coel (Chewing Gum, Black Earth Rising) spins a harrowing tale based on her own experience with sexual assault. She plays Arabella, a savvy London social media star famed for her first Generation Z book and trying to pen a follow-up. Taking a break on her deadline all–nighter to meet friends at a bar, she swallows a roofied drink and comes to later, missing a block of time and having fragmented memories of a stranger forcing sex on her.

The 12-episode series explores themes of sexual force and persuasion, not only through Arabella, but in the lives of her best pals, an aspiring actress (Weruche Opia) and gay male chum (Paapa Essiedu). Coel is blunt in depicting her character’s sexuality and casual drug use (even a dealer tells her, “Stop the drugs”). There’s bravery to the actor’s (fictionalized) self–exposure, but the show is sometimes a tough but invigorating watch.

In other words, it’s the polar opposite, content-wise, of something like Baby-Sitters Club. But they have something in common. Destroy won’t air its last episode until August 24, and I look forward to savoring the show slowly rather than bingeing.

Please stay safe out there, folks. Stay home if you can. There’s pleeeeeeeenty of stuff to watch . . . including all six seasons of The Americans on Amazon Prime, if you’re in search of a 75–episode deep dive. You may well have the time. Also, I hear that Disney+ has a little show called Hamilton and that it’s cute.