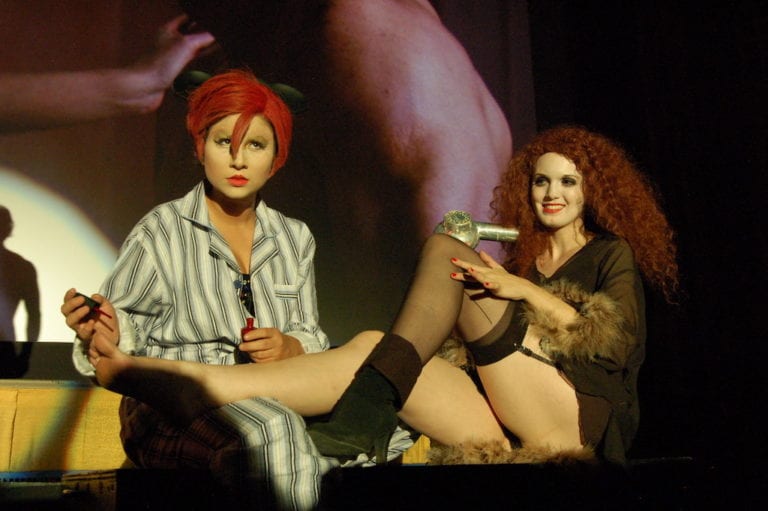 Miranda Sapp and Angel Schmeck perform in the Lips Down on Dixie Rocky Horror Picture Show shadow cast as Columbia and Magenta at the Plaza Theatre in 2016. (Photo by Jace Johns-Cooper)

The Rocky Horror Picture Show is not, by most conventional measures, family-friendly.

It features a monster designed by an alien transvestite scientist for sex, casual dinner-time cannibalism and — perhaps most horrifying — tacky dialogue. But these are also the same reasons why the film has been a certified cult classic since its release in 1975.

It’s also sparked a unique national phenomenon: an audience-driven “shadow cast,” with groups of performers in heels and corsets simultaneously reenacting the entire show on a stage while the movie is running, with audiences yelling “SLUT” and “ASSHOLE” at the screen and dancing the Time Warp in the aisles.

Every Friday night for nearly two decades, one such group, Lips Down on Dixie (LDOD), has gathered together at the Plaza Theatre in Midtown to perform their own shadow cast.

They’ll gossip amidst the smell of fresh popcorn, stretch out in crop tops and lingerie and prepare for their weekly performance. Then, at midnight, the theater lights will dim and the Rocky Horror film will begin. The actors will take to the stage to perform their shadow cast under the screen, mirroring the exact motions and dialogue of the movie for a rowdy audience, with pitch-perfect costumes and props.

It’s a different rotation of the approximately 80 LDOD cast and crew members each week, but they’ve been putting on these performances together for the past 19 years.

Candace Weslosky, who joined the cast when she was a teenager, has served as the group mom/host/director for a while. She started with LDOD at its first performance and is now in her 30s, working as a medical assistant when she’s not organizing the LDOD crew.

When she first joined LDOD, Weslosky’s job was lying on the floor with a flashlight, shining spotlights on the performers because they had no formal lighting.

Now, the all-volunteer cast has lighting, stunning costumes and near-impeccable makeup. They work with the intensity of cosplayers, fully embodying their Rocky characters. They also work with expert screen-accuracy coaches to master the timing nuances of their specific character in the film, and rehearse dance numbers with groups according to their character. They also do their show every week — a rarity among other casts in the country, most of which perform only monthly.

“We go all out,” Weslosky said. “We want to be the most screen-accurate amazing stage-quality thing you’ve ever seen in a theater — [but something that’s] only 15 bucks at your local art house.”

In LDOD’s early years at the Plaza, the show would regularly draw roughly 20 audience members, thanks in large part to cast members in fishnets passing out flyers on nearby street corners. Over time, that number has grown, consistently bringing in a crowd of over 150 people each week.

“It’s loud and it’s very gay,” said Jace Johns-Cooper, the show’s current director. “This is an experience. You’re not just going to see a movie.”

And LDOD is not just a performance group.

It’s also been a 501(c)(3) nonprofit since 2010, with rules, including a sober policy, in place to ensure that the cast and crew always feel comfortable and that LDOD always remains a safe place for queer young people to congregate and create community.

For example, LDOD’s new lanyards, which identify cast and crew members to theater staff at the door, announce the pronouns of each member, with options she/her, they/them and he/his. It’s one small way to make sure that everyone’s identities are seen, valued and respected. Cast members, regardless of gender, are also allowed to perform as any character.

“It was queer-affirming before that was something you could talk about,” said Weslosky. “This has always been a place for queer kids trying to live their truth.”

Barbara Rogers, who has been performing in the cast as Janet almost every Friday night for three years, appreciates the sense of family she has built with the other cast and crew.

“It’s nice to have people that I can be me with,” said Rogers. “I used to be shy and easily embarrassed, but now I’ve become a lot more open. I feel a lot more like me now.”

“I don’t have a great connection with my family of origin, so these are my people,” said Sammie Johns-Cooper, who performs in the cast as a variety of characters and is the current assistant director of the show.

For Weslosky, this tight community is not only the result of its people. It’s also inextricably tied to the Plaza Theatre itself. Since the beginning, she’s had a positive relationship with each of the Plaza’s owners — including current owner Chris Escobar — sharing a mutual dedication to ensuring that the theater stays open.

“We’re here because we love this theater, and we love Rocky,” she said. “When you go outside and you see buildings being torn down — when you see this new high-rise here and that condo there — that’s when you have to stand your ground and say ‘not here.’”

Said Weslosky, “This doesn’t get bulldozed.”