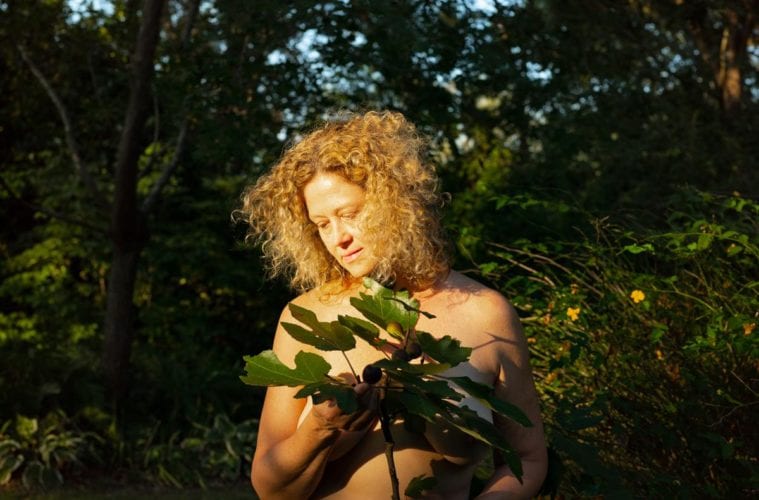 Against the Tide at Whitespace points up need to truly see women past, present

Against the Tide, on view through March 23 at Whitespace Gallery, brings together photography from three artists and SCAD Atlanta professors – Suellen Parker, Sandra-Lee Phipps and V. Elizabeth Turk. The title refers to a common idiom that implies resisting cultural norms. Fittingly, the show runs during Women’s History Month.

Turk’s Tremulous Anatomies series shows abstracted figures in ghostly silhouette against a darkened background, each with the name of a mythological woman. Turk uses an analog, camera-less technique that dates to early 19th-century processes. A model is arranged atop light-sensitive paper in direct sun, her body creating an unexposed area of white. Turk then creates patterns and textures within the silhouette using materials such as fabric and plants. Each piece is a singular, irreproducible work. The model’s identity is obscured, and this lack of specificity makes each piece an elegiac ode to archetypal notions of femininity. Turk’s Electra, for example, takes its name from the legendary Greek princess who helped her brother plan matricide to avenge the death of their father. In this image, Electra’s face turns to the right, partially revealing a veiled profile. Overlapping patterns created by drapery and foliage fill her shadowy form like abstracted variations of her internal body. Her arms, held out at a subtle, downward V-shape, suggest inner strength and acquiescence to her family’s violent fate.

Phipps cites the influences of poet Edna St. Vincent Millay (on the Lumen prints in the Her Name Is Vincent series) and Joni Mitchell (in the Lesson in Survival portrait series). Phipps created Her Name Is Vincent with a camera-less process similar to the one Turk used. Millay’s Hearing Your Words and Not a Word Among Them (Sonnet XXXVI) inspired a series of abstract botanical images that complement Lesson in Survival. The latter pairs women with nature in an interpretation of Mitchell’s same-named song.

In I Told Him These Things I’m Telling You Now from the Survival series, sunshine illuminates a woman (painter Jennifer Hartley). Her curly blonde hair creates patterns on her shoulder, and the photography’s goldish color echoes the bright yellow of flowers behind her.

When You Dig Down Deep from the Vincent series shows a woman from the collarbone down. She’s holding dried flowers. Freckles and scars color her skin, resonating with the dried-flower bouquet she holds and the series’ mauve-flecked floral imagery.

Focusing on normal variations in skin, Phipps subtly challenges conventional beauty standards that encourage women to mask so-called imperfections. Among the most commanding here is Spinnin Out on Turns, It Gets You Tough. Using the opening line of the Mitchell song, Phipps creates a portrait of a nude woman swimming (Vanessa Briscoe-Hay of the band Pylon). Her face turns upward as her body rotates. Her knee and breast break the surface, her bright pink toenails standing out against the murky water. Light sparkles on the ripples around her, suggesting respite from swimming against the tide. Phipps cites water as a source of healing. Kamala Harris, a pigment on ink print by Suellen Parker

Parker’s God Has Given You Minds dominates Whitespace’s second room. The series pays homage to powerful congresswomen, some fresh, others seasoned — Speaker of the House Nancy Pelosi, Alexandria Ocasio-Cortez (new to the House this year) and Senators Elizabeth Warren (serving Massachusetts since 2013), Dianne Feinstein (serving California since 1992), Kamala Harris (serving California since 2017) and Amy Klobuchar (serving Minnesota since 2007). Each wears a white shirt with handwritten script on it. The script, copied in longhand by the artist, comes from a speech by famous suffragette Elizabeth Cady Stanton. Digitally collaged suffrage protest photographs from the Harris & Ewing studio fill their collars.

Parker’s literal series lacks the nuance of much of the rest of Against the Tide. But desperate times call for desperate measures. Her insistent and didactic portraits remind us of the accomplishments of the congresswomen depicted and of the gender disparity in Congress.

More women (a total of 127) were elected to Congress in 2019 than ever before, but they still account for only 24 percent of members. This makes Parker’s work a fitting conclusion to Against the Tide, reminding us of the ongoing need to reevaluate women’s past and present contributions.