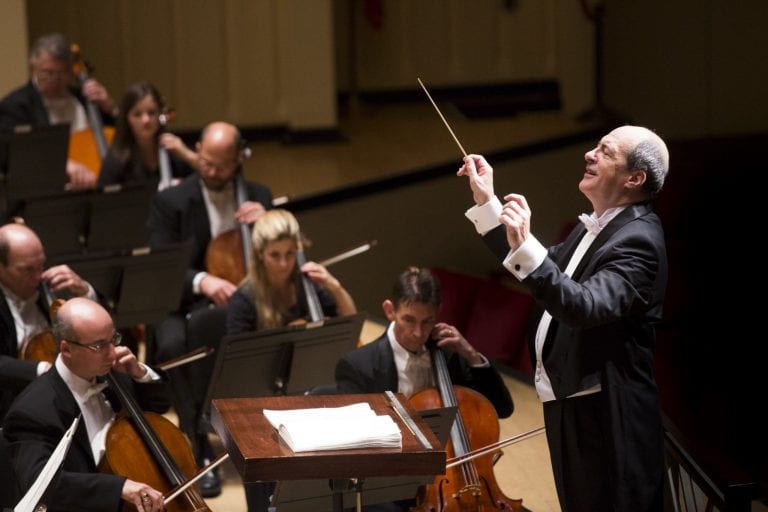 Robert Spano will end his two decades with the ASO at the end of the 2020-21 season. (Photo by Jeff Roffman)

Spano, 59, will begin to work with the Fort Worth orchestra in April as “music director designate” and will have an initial three-year contract as music director beginning August 1, 2022. He has served as the orchestra’s principal guest conductor since 2019, and plans to move to Texas this spring.

“I am thrilled to be joining the Fort Worth Symphony Orchestra and look forward to getting better acquainted with the vibrant culture of this remarkable city,” Spano said in a press release. “Every facet of the orchestra is clearly committed to its success — the management team, the supporters, the audience and certainly the marvelous musicians who make up the orchestra itself.”

Spano announced in 2018 that he would retire from the ASO at the end of the 2020–21 season. He will become the orchestra’s music director laureate and continue to conduct the ASO on a regular basis. The ASO has launched a search for Spano’s replacement.

“The Atlanta Symphony Orchestra sends our greatest congratulations to Maestro Robert Spano on his appointment as music director of the Fort Worth Symphony Orchestra,” said Jennifer Barlament, the ASO’s executive director. “Robert has led the ASO for 20 seasons with outstanding leadership and creativity, and we look forward to seeing him in Symphony Hall again as music director laureate of the ASO following the 2020–21 season. The search to identify a successor to Robert is well underway, and we expect to make additional announcements in the coming months.”

The Fort Worth symphony has a more modest reach than the ASO. It has 67 musicians listed on its website as orchestra members, compared to 88 for the ASO. The Fort Worth season consists of 10 symphonic programs, and Spano will conduct six of those performances. He will oversee the orchestra and music staff, and shape its artistic direction.

Since 2011, Spano has also served as music director of the Aspen Music Festival and School in Colorado. He will continue that role.

Mercedes T. Bass, the Fort Worth orchestra’s board chair, said she has admired Spano’s work in Aspen and his commitment to showcasing the works of new composers. “This is a dream come true for me,” she said in the press release. “I am confident that under Maestro Spano’s baton, the Fort Worth Symphony Orchestra will reach ever higher levels of musicianship.”