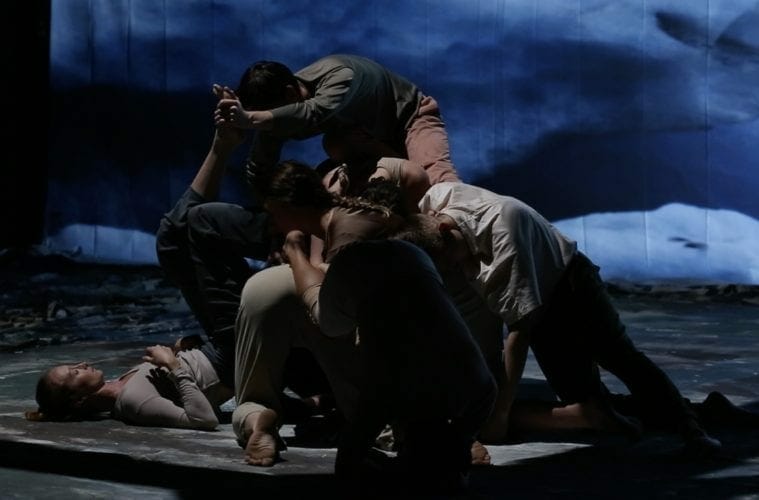 Core Dance debuted artistic director Sue Schroeder's "if . . . a memoir" at the B Complex in 2019, then restaged it in Arkansas in October 2019. (Photo by Felipe Barral)

For many in the dance world, the pandemic shutdown has created space for reimagining. Sue Schroeder, cofounder and artistic director of Core Dance, is no exception. “I’m a self-reflective person,” she says. “I am constantly remaking myself, trying to figure out, first, how to increase my capacity for joy, and then where our efforts are best spent. I think for people who don’t do that, the pandemic is much more intense.”

This deep dive inward, and the shutdown restrictions themselves, have led Schroeder to rethink what she’s been doing for more than 40 years: developing independent movement artists, presenting work that gives voice and shape to her social and environmental concerns, and engaging with the community. Core Dance’s current projects reveal her creative response to a locked-down world.

After months of almost no activity, the company regrouped in September with COVID-19 protocols in place. In October, the dancers drove to Arkansas (they normally would fly) to perform Schroeder’s Nevertheless, She Persists at two locations: the University of Central Arkansas and the Crystal Springs Museum of Modern Art. Schroeder was overjoyed to bring a live performance to a community that was hungering for it. “The audience was so grateful,” she says. “They were so touched, so longing to have this experience.” Sue Schroeder says she has used the pandemic shutdown as an opportunity to reflect and assess. “There’s no time to be stalled or stale right now.”

The work was part filmed and part live outdoors (socially distanced, of course). Integral to the performance was a spoken-word ensemble, the Writeous Poets, and several other local performers, all of whom had to adapt to the protocols. “It was a lot of details,” Schroeder says with an exhale. But she felt the work needed to be done then, before the November election, because of its message — commemorating the 100th anniversary of women’s suffrage. “Real change is super important to me,” Schroeder says. “When we work in communities, we’re not just checking the box. It’s not superficial. It goes really deep.”

On February 18, from noon to 1 p.m., Core Dance will offer audiences a virtual version of its regular Lunchtime in the Studio. A movement exchange between four choreographers — two in Jerusalem, two in Atlanta — will be filmed in advance; their conversation about the creative process will be streamed live. The event is free, but registration is required.

On March 26–27, at Atlanta’s B Complex, the company will present a live performance of No Time to Lose, a new work that involves movement artists, a composer, a writer, theater and visual artists. Again, COVID-19 protocols called for a careful assessment. In order to maintain social distancing, the audience will rotate each half-hour, allowing 10 people at a time to view the work.

Like many arts organizations, Core Dance has pushed much of its work online, which has a plus side — it can reach a wider, worldwide audience. The company’s 19th Century Wo(Man) was originally designed to be live at the National Gallery of Prague: “It’s a museum work, which seems to be what everybody wants me to do right now,” Schroeder says. She has reimagined it as a virtual and live hybrid. The first section will be online, the second section will be live at the Prague gallery in late April. Core will be part of the Global Water Dances project in June. (Courtesy of Core Dance)

As the company’s busy schedule demonstrates, Schroeder feels compelled to keep creating. “We need to keep generating the energy,” she says. “There’s no time to be stalled or stale right now. We have to keep moving. We have to be in relationship with each other.”

It’s not only the pandemic that fuels Schroeder’s drive. “As we age, both the organization and me as an individual, we need to be more precise about where we can make our mark, where our efforts are best spent.”

Her mission has always been to develop independent movement artists. They join Core Dance to train, perform, travel with the company and develop their own craft. Many arrive open and curious, Schroeder says, but with no existing body of work or artistic voice. “I have spent 40 years creating dance makers,” she says. “I thought, ‘How would it be if the impulse were already there? If I didn’t have to ignite it?’” So she decided to shift the model and bring in experienced dance makers with backgrounds in artistic research, collaboration and community but who are struggling to find space and funding because of the pandemic.

The pilot phrase of this new Residency Dance Artist Program runs from now through August 2022 and gives the four participants lots of time to create. They will still train and tour with Core Dance but will have 15 paid weeks in which to develop their own work. Core Dance will provide the studio space, resources and production assistance. “It’s a step toward supporting the careers of these independent artists,” Schroeder says.

It’s hard to capture the scope of Schroeder’s vision — June is already booked with participation in Global Water Dances, and there’s much more on the horizon — but her passion for the work, even in challenging times, is clear. “What Core Dance does is very real,” she says. “Not perfect, but real. I’m hearing how that’s uncommon. It’s not about me. It’s about passing it forward, influencing the field or facilitating a change in a needed direction for an individual or a cause. There’s a certain generosity in that.”