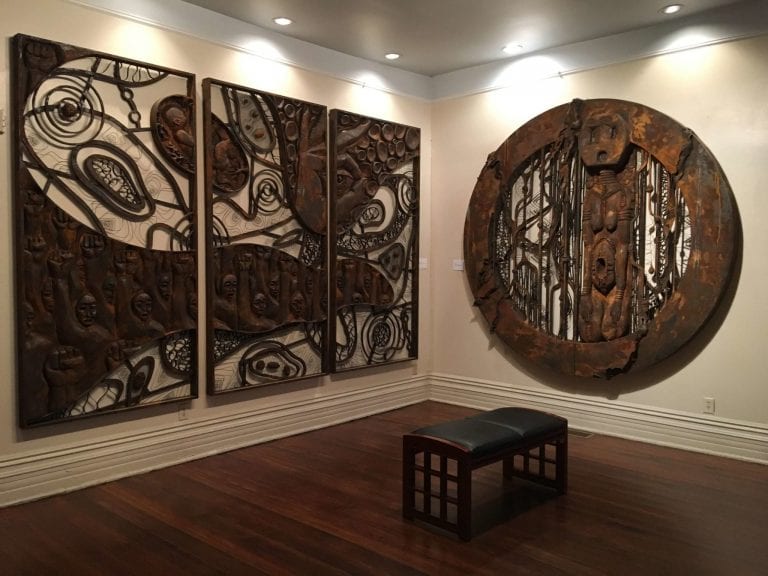 Review: with “RSVP,” Atlanta’s artists reserve a seat in the spiritual realm

Respondez S’il Vous Plait (RSVP), currently on view at the Hammonds House Museum, exhibits artworks that operate as narratives. While the title of the show does not allude to the mission of the exhibition, which is to show the artists as activists, storytellers, truth seekers and critics, the artworks in the exhibit certainly act in favor of said mission. The written material that accompanies the exhibition explains the show’s objective is to share how these artists see the world. But the exhibition could not possibly encapsulate each artist’s world view in so few artworks. By gathering the city’s most heralded artists, including Fahamu Pecou, Alfred Conteh, Michi Meko, Kevin Sipp, Sue Ross, Grace Kisa, Fabian Williams and Maurice Evans, the curators have attempted to redirect the Hammonds House Museum in light of administrative changes and cater to a new audience.

One thing, though, is readily apparent: the works displayed in the galleries prove impressive in their mission to spearhead activism. As we are thinking of artists as activists while viewing this exhibit, the type of activism present here might not have direct legislative effects, but it aims to provoke change. For instance, the marches in Selma, Alabama, were a type of activism that brought about the Voting Rights Act of 1965. The Black Lives Matter Movement has tried to combat police brutality and force fairness between Black people and the law, but their efforts have yielded little changes so far. There is an activism being employed in this exhibit that works on an individual level rather than the collective. On a search for a clearer understanding of the concept of spiritual activism, I happened upon “‘I’m a Citizen of the Universe’: Gloria Anzaldúa’s Spiritual Activism as a Catalyst for Social Change,” an essay by AnaLouise Keating.

According to Keating, spiritual activism seems to be a contradiction of terms. Activism is the work done to affect change concerning practical things, while spirituality is more interested in the ethereal. So when we bring these two ideas together, spirituality and activism, it’s like we are causing revolutions not only in the outer world but also in an individual’s inner world. Keating notes, “spiritual activism is spirituality for social change, a spirituality that posits a relational worldview to transform one’s self and one’s world.” Essentially, when the inner work is done, the outer world can benefit from the inner changes. Keating also contends, “. . . this simultaneous attention to personal and collective issues/concerns is a vital component in spiritual activism.”

One is met with Kevin Sipp’s A Spell for Spiritual Warriors, an African spiritual-based altar decorated in red and white for Shango, the Orisha of fire, thunder and lightning. It is placed on top of a mantle directly in front of the exhibition’s entrance. Sipp includes farming tools — a hoe and an ax — along with beads and a red candle for Shango. He claims, “[he] wanted to meditate on the power and pain of our gestures and artifacts, on the movement of our hands and power of our voices and the accumulation of our spiritual/human experience.” While intelligentsia dismisses spirituality for lack of tangible evidence, African cultures throughout the diaspora have used their belief systems to anchor their lives in traditions they have some control over. Keating notes, “. . . references to the spirit, souls, the sacred, and other such spiritually inflected topics are often condemned as essentialist, escapist, naive, or in other ways apolitical and backward thinking.” When African-based spiritual practices have been employed over centuries to sustain the livelihoods of people the world over, there is proof that spiritual belief systems are valid forms of activism. And this exhibition serves as an extension of those beliefs. Because A Spell for Spiritual Warriors is likely to be the first artwork a viewer sees, we must ask: how do we contend with this narrative, and how does this narrative relate to the other artworks?

When Fahamu Pecou “speaks their names” in When-A-Brother II: Amidou, Sean, Oscar . . . , the last word he paints on his own image wearing a t-shirt is “you.” The spirituality inherent in speaking the names, the evocation of those who have passed to ask for guidance, strength and wisdom is at play here. Pecou calls on celestial bodies for leadership in the physical world. The t-shirt is symbolic because it is often a form of remembrance for the fallen, the tradition of posthumously silk-screening an image of the deceased onto a t-shirt for family and friends to wear. Will the next name on the virtual t-shirt be yours? Pecou recognizes that the next person to be brutalized by police treatment could be you or him — anyone. Here, the activism directly addresses the viewer, as he forces us to think of the circumstances that caused the deaths of the three men named and the situations that could possibly cause anyone’s faultless death. By forcing the viewer to think of their own mortality, Pecou is enforcing a cognitive shift.

The second gallery in the exhibition houses some very powerful notions. Alfred Conteh displays three massive sculptures. As a spiritual activist, Conteh offers the idea that we are passing energy from one generation to the next. In Conduit, Conteh sculpts an electrical socket to the body of a traditional African sculptural form inside a circular shape. In doing so, he is asserting that energy transmits through the body like electrical currents. By placing the figure within a circle, he reinforces the idea that energy moves in a circular direction about the world, inside us and between us. What we give, we get back. So when the world is being heartless toward a people, those people will be heartless toward the world. Keating states, “. . . spiritual activism’s holistic approach encompasses both the personal and the systemic. Spiritual activism begins within the individual but moves outward as these individuals . . . expose, challenge, and work to transform unjust social structures.” Conduit most clearly illustrates how the system operates by manifesting recycled negative energy.

It is essential to have a discussion not simply about activism, because those conversations have been happening and have affected some change, but specifically about spiritual activism. Looking at African spiritual belief systems is necessary for the investigation of African culture. Without being frightened by the skeptical glares of the dominant culture, artists working in this vein should be confident that the spiritual activism embodied in these works have proven to be effective the world over and for centuries. This is the direction I see the artists in RSVP taking the conversation of activism.