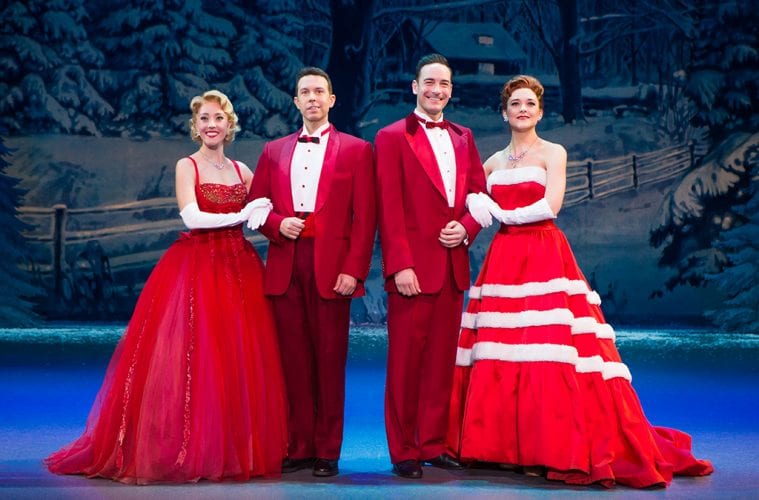 Review: “White Christmas” at the Fox Theatre meanders in nostalgia at the expense of a good story

Complaining that Irving Berlin’s White Christmas is too old-fashioned is a bit like complaining that a swim in the ocean is too wet. Just as the ocean can reliably be counted on to be full of water, so too, whenever White Christmas is on the bill, you can rest assured that everything will have an anesthetic, soft-focus, old-fashioned feel to it. Treetops will glisten, children will listen, days will be merry and bright and on and on. But old-fashionedness too often gives way to leaden stodginess in an unappealing touring production of the 2004 stage version of the classic film currently at the Fox Theatre through December 2.

Even from its inception, the film White Christmas relied on a sort of backward-looking, cobbled-together aesthetic. The song, which originally appeared in the 1942 Fred Astaire-Bing Crosby film Holiday Inn and had been a huge hit for more than a decade, is itself about a longing for snowy Christmases of the past. The action opens during World War II, and much of the story — if that’s the right word for the nothingburger of a plot — takes place in the inn from Holiday Inn. Fred Astaire, who obviously was not always terribly particular about plot lines for his films, backed out of the project after reading the script. He was replaced by Danny Kaye without any alteration whatsoever to the film’s trajectory toward becoming one of the most popular Christmas movies of all time. 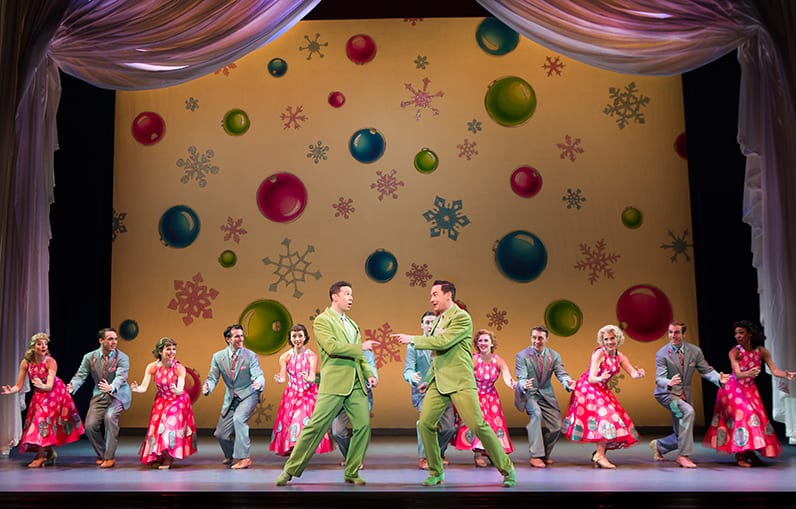 Two G.I.’s make it to The Ed Sullivan Show in the national tour of Irving Berlin’s White Christmas.
(Photo by Jeremy Daniel)

One wants to say, “Clearly, it’s not about the script,” but the feeling that Astaire was right regardless starts to creep in just minutes into White Christmas. A viewer can learn to accept the lame jokes and sheer dippiness of the plot about a group of performers in a snowless Vermont at Christmastime, but many of the songs actually have a synthetic, “phoning it in” quality to them, as well. Sure, there’s “White Christmas,” and “I Love a Piano,” which begins Act II, is a brilliant song beautifully staged. The overture has a promisingly brassy, jazzy feel to it, and the show’s creators wisely inject a few other classic Berlin numbers from other shows into the new stage version.

But outside of that, the numbers from White Christmas are surprisingly forgettable, as in: I’ve forgotten them. White Christmas was clearly not Irving Berlin writing at his best. Many of the songs don’t even involve Christmas, and the show can start to feel like Jurassic Park without dinosaurs. I caught my first glimpse of a Christmas tree looming at the back of the stage in the middle of Act I and thought, “Thank god. It’s coming.” But we actually wait until the very end of Act II for a money shot, and by then, the drifting fake snow and elaborate Christmas set have simply arrived too late. Everything that has come before seems like filler, and you question how and why you ever came to believe that red outfits trimmed in white fur and a rousing chorus of “White Christmas” could be passed off as the wonderful highlights of an evening. Performers are pleasant enough, but predictably, they all lack the star quality of the likes of Crosby, Kaye and Rosemary Clooney.

Results may vary. I suppose this inoffensively bland dial tone of a show may be just what some theatergoers are seeking at this time of year, but they may still find the experience disappointing and empty. May all your days be merry and bright, and may all your Christmases involve better entertainment than White Christmas.