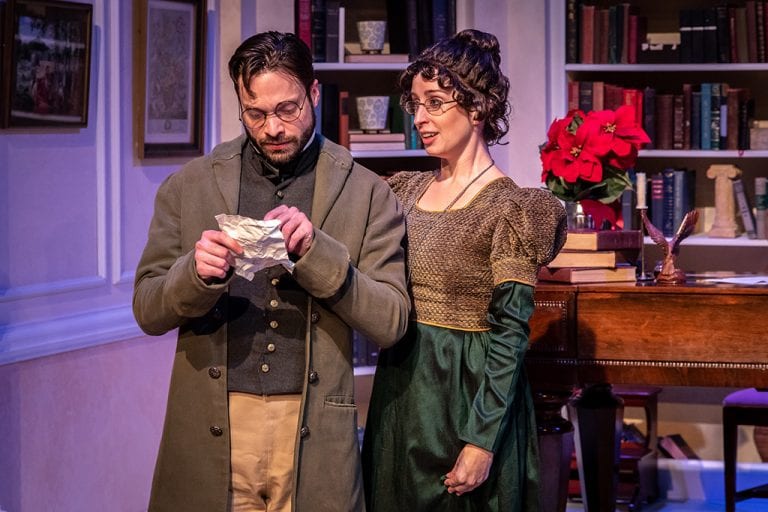 Jonathan Horne and Amelia Fischer played love interests in "Miss Bennet: Christmas at Pemberley" at Theatrical Outfit the past two seasons. This holiday brings its sequel, "The Wickhams," which looks at the goings-on in the servants quarters. (Photo by David Woolf)

Perhaps because Austen published relatively few novels, her casual fans and the more ardent “Janeites” can have an outsized appetite for new takes on her work. Staged by Theatrical Outfit (through December 23) for the second year in a row, Miss Bennet, by playwrights Lauren Gunderson and Margot Melcon, doesn’t dwell much on Christmas customs but offers a clever extrapolation of Austen’s characters and themes, contemplating what happens after “they lived happily ever after.”

You don’t have to be an Austen expert to enjoy Miss Bennet, but refreshing your memory of Pride and Prejudice will help you appreciate some of the callbacks to the novel. The play takes place two years later in 1815, with sisters Elizabeth and Jane Bennet (Jasmine Thomas and Jeanette Illidge, respectively) now happily married to Mr. Darcy (Justin Walker) and Mr. Bingley (Juan Carlos Unzueta). The youngest Bennet sister, Lydia (Devon Hales), apparently has a less satisfying marriage but remains flighty and flirty. The sisters reunite at Darcy’s Pemberley manor for the holidays, which Elizabeth celebrates with the German tradition of raising a tree in the house.

Miss Bennet focuses on unmarried middle sister Mary (Amelia Fischer), who in the book was something of a pedantic bookworm. In the play, she’s still bookish and overly enthusiastic but has grown into a shrewder and more self-aware young woman, her passion for Beethoven conveying her accomplishment. Fischer presents Mary as a bright, flinty young woman coming into her own, with an intense curiosity about the world and, like many Austen heroines, distress at the lack of choice society offers her. She fears that she’s fated to be a spinster in her parents’ home.

Enter Mr. Darcy’s old friend Arthur De Bourgh (Jonathan Horne), a socially awkward scholar who’s just inherited a nearby estate. Another Yuletide guest at Pemberley, Arthur proves Mary’s intellectual equal, and they warm to each other almost immediately. Horne finds humor in Arthur’s befuddlement at the sensation of falling in love, which he first interprets as inexplicable worry for Mary’s well-being.

Mary and Arthur are so clearly made for each other that the script struggles to give the budding courtship some worthy obstacles, in sharp contrast to Pride and Prejudice’s rollercoaster romance. The first act contrives some frivolous misunderstandings, which the playwrights all but acknowledge with Mary’s line “I’ve always detested farce.” The arrival of a willful woman from Arthur’s past (Stephanie Friedman) complicates matters without adding much more in the way of stakes or suspense.

A native Atlantan, Gunderson began her writing career in the early 2000s and in less than two decades became the most produced living playwright in America: her interests in science, history and early feminism are all over Mary and Arthur’s conversations. Miss Bennet generally provides an excellent pastiche of Austen’s trademark dialogue, and the way deep affection and powerful loathing can be couched in genteel language.

As directed by Carolyn Cook, some of the performances seem a bit big and demonstrative for the aristocratic setting. Perhaps Austen adaptations succeed so well on film and television (such as the Oscar-winning Sense and Sensibility or the hit Pride and Prejudice miniseries from the mid-1990s) because closeups so effectively suit the drama of turbulent emotions kept in check by social graces. Hales and Unzueta, for instance, give crowd-pleasing performances that nevertheless feel more suited to broader comedy. Fortunately, Walker effectively captures Darcy’s blend of lordly reserve and deep feelings, doing justice to the famously dashing character.

Ultimately the play finds considerable charm in seeing the siblings team up to support each other while the husbands defer respectfully to their wives. It’s not a deep show, but it offers a genuinely warm tribute to the powers of love, marriage and sisterhood. Miss Bennet makes a more appropriate holiday show than the kind of seasonal chestnut that draws more vaguely on nostalgia and the Christmas spirit, and it might even be better for date night than a family outing.