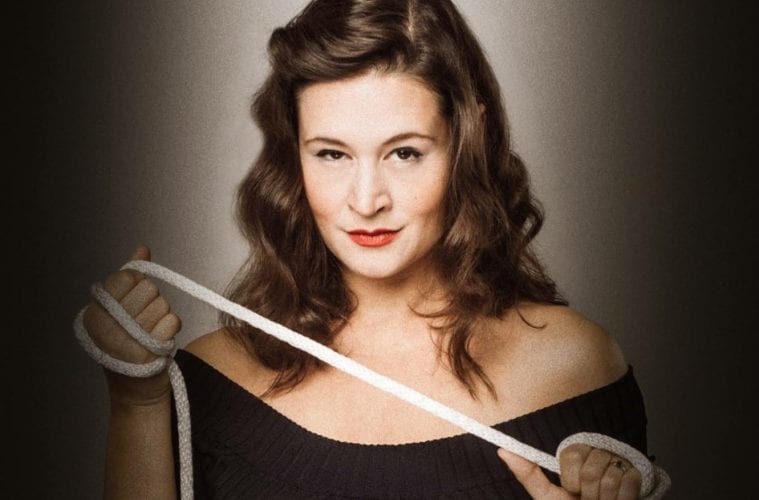 Review: The Weird Sisters bring out their ghoulish Halloween spook for “Dangerous Women”

The Halloween season is as good a time as any to remind ourselves that women can be every bit as diabolical, bloody and violent as their male counterparts. Dangerous Women, a new show through October 30 from the all-female, Atlanta-based theater troupe the Weird Sisters Theatre Project, offers up a ghoulish parade of female murderers, both real and imagined, in a compilation of short plays.

The Weird Sisters troupe was founded in 2012 by a core group of Atlanta actresses — Kelly Criss, Veronika Duerr, Jaclyn Hofmann, Tiffany Porter and Megan Rose-Houchins — who saw the need for more opportunities, both on stage and off, for women in the theater. Many of the founding members have since moved to other cities or to other projects, but the recently rebooted company lives on with Shelli Delgado, Kate Donadio MacQueen, Rachel Frawley, Julie Skrzypek and Rebekah Suellau now at the helm.

For Dangerous Women, the faces on stage are new, and the stage itself is new as well. The show takes place at the recently unveiled Windmill Arts Center, a black-box space in a renovated former business in the East Point neighborhood.

The Dangerous Women evening focuses on women but is hosted by a male narrator (Erik Poger Abrahamsen). He leads us through the pieces while also introducing various infamous female murderesses from history who briefly join him on stage between the scripted short plays. He’s also followed around by a voiceless, dutiful 1950s housewife (Bekah Medford), whom he attempts to instruct in the ways of becoming a successful murderess (his instructions are so patronizing that, by the end, she’s ready to follow his advice to the letter, with an easily available first victim right on hand).

The heart of the evening lies in the seven short plays, each of which relates a gruesome murder or other macabre act involving women, several of them written by Weird Sisters company members. The pieces vary in tone from the poetic folktale-like “Night Sister, Bright Sister” by Madeleine St. Romain to a comedic tale of a controlling abuela who poisons her granddaughter’s fiancé to test his metal in Garza Uebberroth’s “Family Tradition” to a jump-in-your-seat slumber-party ghost story of the infamous Slender Man in Rebekah Suellau’s “Slender Man Sleepover.”

The various pieces are set in different spaces at the new Windmill Center — the aim seems to be for the evening to have the spooky, peripatetic, exploratory feel of a Halloween Haunted House — but there are really only three rooms in the new venue (the black-box space, a rehearsal room and the lobby). Movement between the rooms doesn’t feel exciting or interesting, and we arrive in a new room merely to sit down and watch a set of short plays: it’s surprisingly hard to get into the head space of watching traditional theater after you wander.

The show also mixes the historical and the imagined in its various pieces (sometimes we’re looking at actors playing real figures from history; other times, they’re appearing as legendary figures and then later as newly imagined fictional characters). Sorting it out certainly isn’t rocket science, but it can be a surprisingly bumpy and disconcerting ride jumping back and forth between the various modes. The evening is also by turns sad, silly, tragic, noisy, campy, serious, creepy and subdued. Having so much to offer is great, but it can take some time to realize that you need to be switching gears along with the show.

Still, in spite of its problems, unlike a typical Halloween haunted house, Dangerous Women provides some genuinely moving, funny, thought-provoking and interesting dramatic moments. And toward the end of the evening, I was ready to conclude that the show didn’t include any typical Halloween-sudden-thrill-type scares, when I had my first genuine freak-out of the season. It’s hard to say how or why the very simple moment spooked me, perhaps because it was so unexpected, but my blood ran cold.

In the end, the show serves to remind us that the ladies can be pretty sneaky. And dangerous. And when we’re very lucky, downright weird.