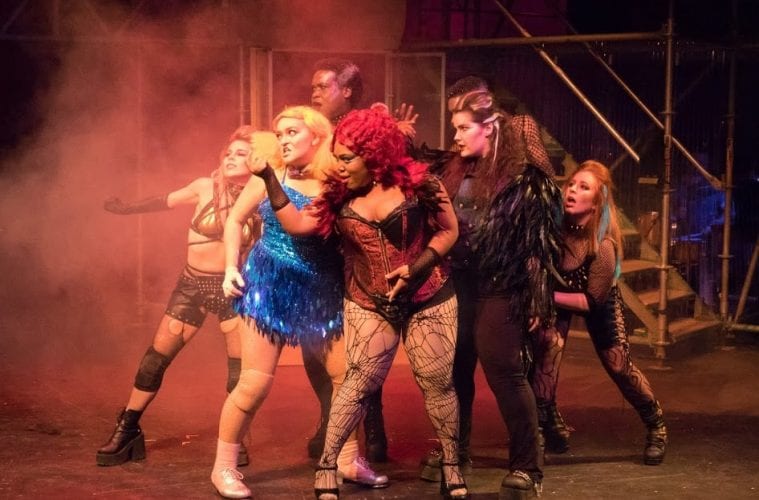 The songs in any production of The Rocky Horror Show need to sound incredible or else all is lost. The story is certainly fun and weird, but no one’s coming for that plot.

Unfortunately, a new production at Atlanta’s Out Front Theatre, running through November 5, was plagued by sound problems on opening weekend. Singers and band were out of balance, mics dropped out, static rustled noisily during quiet numbers, echo effects lasted well past the end of a song making dialogue incomprehensible (and then strangely the echo effect seemed to fade out once a new song began, when it might actually have sounded good). Audience members will find it strange to be a few feet from the stage in the intimate venue and, on occasion, unable to hear or understand the actors.

Rocky Horror, as the name suggests, does have a rock ‘n’ roll aesthetic, so sometimes the show narrowly gets by in that sort of torn-fishnet, garage-band, punk-rock sort of way. The band, with amplification less problematic than the actors, does have a genuinely appealing sound with a surprisingly authentic and forward rock edge to it. But in the end, it’s not at all suited to the style of singing the performers utilize, which is situated firmly amid the lights of Broadway rather than deep in the gritty heart of rock ‘n’ roll. Even without the mic problems, the styles clash.

I was genuinely impressed by the entrance of Kiona D. Reese as the lead character Frank N. Furter and by her gospel-inflected, soulful take on the first song, “Sweet Transvestite.” But by the time the actress got to “I’m Going Home,” the character’s touching final number, the verses were rushed and breathy and the chorus belty and boomy. The best thing about her characterization is that it’s original. Although it’s not perfect, she absolutely puts her own spin on things when far too many live performers in the role just end up sounding like a poor man’s imitation of Tim Curry (who may simply own the part and probably always will).

Costumes, which are crucial in a show about cross-dressing, are nicely done, but again things seem somehow too jumbled. There’s something almost cartoonish about Riff Raff’s feathered coat and Bride of Frankenstein hair or Columbia’s frizzy neon pigtails and sequined tap-skirt (they look like the characters as Walt Disney might have drawn them). But then the outfits for the final floor show are meticulous and adult, like Gaultier couture. Strangely, Frank doesn’t get the show’s best outfits, which should never be the case.

Audience participation developed as a tradition at late-night screenings of the film; it was never part of the original live show. So when audiences return to a live version, there’s often a hesitancy and tentativeness about speaking back. It’s fun when they finally do, and then strange when they stop, and then later it’s annoying to hear them when you’d rather try to catch what’s on stage.

Here, the fans occasionally miss an opportunity the actors clearly leave open for them, and then other times the actors give line readings that leave no space for the customary response. And obviously, only a small handful of people in the audience will know what they’re supposed to say and when. In other words, audience participation ends up feeling like another inconsistent, unsatisfying element of the show. A program note about audience participation and when it’s inappropriate makes some good points, but itself ends up sounding inappropriately school-marmish and mother-hennish. It’s Rocky Horror, not King Lear, for goodness’ sake.

One of the most inventive, functional elements of the production is the use of a different local celebrity or drag star to perform as the Narrator at each performance. (It’s a small role, and the Narrator can be, and often is, portrayed as reading from a book, so there’s not even the need for a guest actor to memorize lines.) The night I went, Atlanta actor and playwright Topher Payne performed as Designing Women’s Julia Sugarbaker performing as the Narrator — a twist so random and stupid, it’s genius.

Payne doesn’t look enough like actress Dixie Carter for the device to be totally effective, but he can be hilariously, almost eerily, accurate in imitating her singular diction and in satirizing the character’s memorable combination of brazen feminine strength and gentle Southern-grand-dame propriety.

It was fun to see what Sugarbaker made of the action of Rocky Horror. At one point, in an unscripted aside, Payne as Sugarbaker remarked that the story — which begins with the recognizable tropes of a 1950s sci-fi/horror film, which Sugarbaker clearly liked, but slowly disintegrates into a chaotic atmosphere of sexual excess, which she clearly found more baffling — reminded her of “Sunday School when they finally got around to the weird parts of the Old Testament.”

Injecting interesting guest performers into the Narrator’s role is clearly a fantastic innovation, and I suspect it will function well throughout the run. But in the end, other more substantive elements feel too uneven for the show to come across successfully. There’s trouble getting the sound right, and deeper problems in reconciling the production’s Broadway imagination with the show’s singularly weird rock ‘n’ roll vibe.