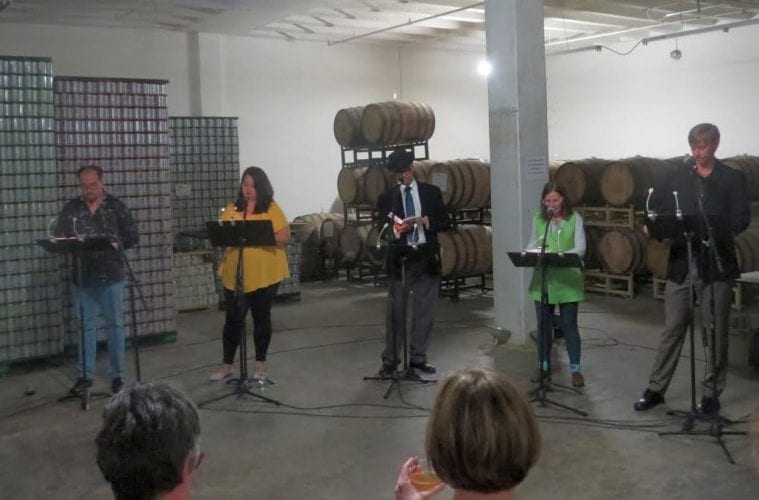 On Saturday night at Orpheus Brewing Co. in Midtown, contemporary music ensemble Chamber Cartel presented a performance of The Fifty Year Sword by American fiction author Mark Z. Danielewski. Aye, there’s the rub, when it comes to a concert of music: The Fifty Year Sword is a novella.

Even so, Chamber Cartel’s artistic director Caleb Herron told ArtsATL that he considers it also “music,” and has been hoping to perform it for more than a few years. Indeed, Danielewski himself has mounted performances of it, most notably the two sold-out debut performances on Halloween 2010 at the REDCAT theater, a 270-seat flexible black box theater located inside the Walt Disney Concert Hall complex in Los Angeles. It was performed again at REDCAT on Halloween in 2011 and 2012.

Danielewski has developed a considerable cult following as a fiction writer since his award-winning debut novel House of Leaves (2000), the work for which he is best known. The Fifty Year Sword remained fairly obscure for eight years after its publication in 2005 because only 2000 copies were published in the Netherlands. It became better known after its broad rerelease in the United States in 2012 by Pantheon Books — only after Danielewski’s REDCAT performances made for some artistic buzz.

That leads us back to Herron’s assertion of The Fifty Year Sword as “music.” Indeed, “spoken music” has a credible historical lineage, from early 20th-century classical works like Ernst Toch’s “Geographical Fugue” (1930), William Walton’s “Façade” (1922, poems by Edith Sitwell), the Second Viennese School’s extensive use of Sprechstimme as a vocal technique, John Cage’s “Lecture on Nothing” (published in 1961 in his book, Silence), and of course the ever-increasing panoply of contemporary rap that populates the commercial music world today.

Of these, as a performed work, Danielewski’s novella comes closest to Cage’s lecture in terms of non-strict rhythms when read. As a multivoiced work, that also places it arguably within the genre of “reader’s theater” — and certainly persons with more dramatic or literary backgrounds would probably prefer that term to “spoken music,” although the lines are broadly blurred, and the rhythmic value of the text, though not notated, is a prime factor in its performance, as demonstrated by Saturday’s performance.

That leads us to Herron’s choice of fellow performers for this concert — not the musicians he frequently works with in Chamber Cartel performances, but local arts figures with literary backgrounds: James Sanders, a poet who is part of the Atlanta Poets Group collective; Natalie Kachadurian, an advertising professional and contemporary music fan who serves on the board of the upcoming 2018 SoundNow Festival; Edward Austin Hall, an author as well as co-editor of several sci-fi anthologies; and Hester L. Furey, a literary historian, poet and member of the collective that created Eyedrum’s online literary journal. Herron, a percussionist, was the only professional musician in the performance.

The Fifty Year Sword requires a quintet of speakers in performance because the book itself makes use of unusual color-coded formatting throughout to indicate which of five characters is speaking at the moment, as indicated in the book’s introduction — which was read just before the performance by Brandon Dodge, a fellow percussionist who just happened to be back in Atlanta for the weekend, during a break from his doctoral studies at University of Cincinnati College-Conservatory of Music. There are two additional colors involved, one representing the voice of Danielewski, the other referencing another novel of his, Only Revolutions, but the colors of the five characters are the ones that find their way into the performance. Using the five colors, the words are parsed in such a way as to produce “hocketing” – where phrases or complete sentences are divided among performers, so they transition from performer to performer mid-sentence without interruption, a performance technique that finds a parallel in the hockets of 12th- and 13th-century European art music where a single melody is shared between two or more voices, fragments passed contiguously between them.

A maturely themed ghost-and-horror story, The Fifty Year Sword takes place at an orphanage in East Texas one late October night, during the 50th birthday party of Belinda Kite, as told by Chintana, a seamstress who is recovering from a painful recent divorce, the result of her husband’s affair with Belinda. A social worker has invited a storyteller to entertain the children, bringing with him a long black box, and he tells them a harrowing tale of revenge, a journey to find an otherworldly swordsmith, and a terrible sword that unfailingly cuts but reveals no wound until the victim reaches their 50th year of life. At the end, the storyteller draws the seemingly bladeless sword from the black box, and Belinda mocks him, takes the hilt in hand and wields it as if slashing herself to disprove the tale. As the storyteller finishes, Chintana and the other guests go outside where Belinda intends to toast herself at the stroke of midnight, when her 50th year begins. The clock strikes the witching hour, and Belinda’s body begins to fall apart as the wounds begin to appear.

Although the story was somewhat hard to follow, especially without a longer, more detailed synopsis in the program, the performance was intriguing; the book itself did not offer up all of the solutions to the performance but required some thought from the performers and overall direction. What does a performer do with a phrase marked for them that is simply an em-dash and no words? Or the book’s pagination — which Chamber Cartel could have made more use of in terms of providing spaces of short mental breaths within the otherwise long, incessant verbal performance.

The most telling factor that differentiates this performance from Danielewski’s own production (according to one of the performers) was taking the author’s marking more literally, allowing multiple voices to speak some words or phrases together in unison — which made the hocketing process much more interesting, dramatic and attention-retaining than hearing only one voice at a time. Overall, it was the rhythmic, musical character of the narrative that held the listener’s ear, even when pieces of the story itself were not so easy to follow.