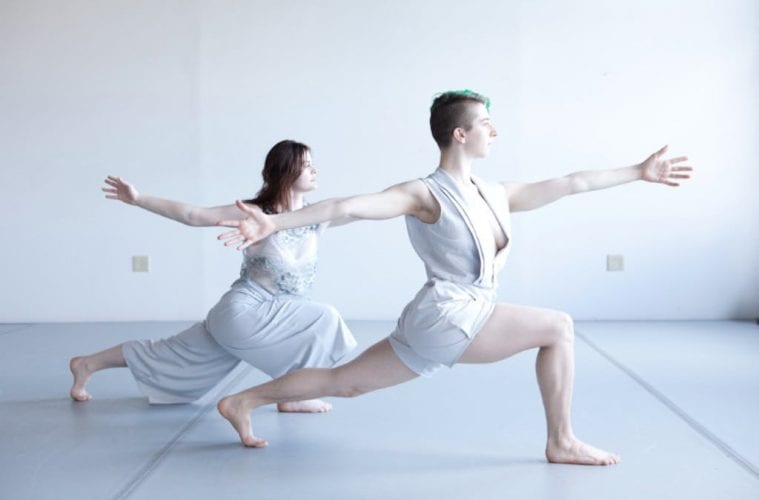 A near complete quiet overtook the audience as they settled into folding chairs at the Lucky Penny’s Work Room Saturday for one of the last performances in that space. The five performers for MaryGrace Phillips’ W E A T H E R stood facing each other in two lines upstage. The stillness and the silence set a contemplative mood, and while the room waited for the show to begin, a heightened feeling of engagement and an extreme awareness of the senses pervaded. Ending the Work Room’s three-year-span as a hub for postmodern dance in Atlanta, this self-contained work spoke to themes of exploration and individuality.

Seven sculptural columns, by artist Justin Rabideau, were deposited around the dance floor. Though each totem’s footprint was small, and air was able to move through their open grid-like structure, they were tall and imposing, filling up the small studio. Three tubes of colored lights — white, pink, and red — floated above in the fluorescent light fixtures and made for a moody ambiance. A muted thunder rolled around us. Was that Jared Kelley and Erin Palovick’s sound design or the coming storm? (In fact, it was probably a low-flying jet from nearby Hartsfield-Jackson airport.) A mechanical hum began . . . air conditioning or the score? Eventually, a chime sounded and seemed to cue the first group of dancers to begin.

Phillips and Nicholas Surbey took to the ground, and with their legs folded up against their bodies, began to scoot downstage. While they methodically made their way toward the audience, they seemed to be acquainting themselves with their own bodies: palming the ground, knees stretching and bending, ankles rolling. Using their hands to palpate their own calves, then their thighs, and back to their calves again, the pair set up a motif that would continue throughout: the body as a landscape, and the dancers explorers of that landscape. When Clara Guyton and Hez Stalcup joined in this earnest examination of muscles and joints, faces calm but eyes intent, the quartet closed in around a downstage column. This seated tableau was one of the few moments of both symmetry and unison in the 45-minute work.

Their soundtrack was now the sedate sound of water lapping. Phillips and Guyton stood up, breaking out of the trance of the plodding tempo to begin a more kinetic and playful phrase. Their limbs began to sweep and swing, sometimes independently or against the rest of the body. Stalcup and Surbey carried on with their floor work. As the four came back together, marching downstage to confront the audience in a line, they reached their arms around their torsos in a sort of hug. As arms floated higher or slightly apart, and a bouncing took over, the variations — arms covering chest, or eyes, or chin — made it clear that they were all on their own journeys, in their own worlds, even when they were swept up together. Some seemed to be holding onto something. Others seemed to be hiding.

The bouncing accelerated to jumping, and the group broke apart into a phrase with larger, swirling strides. Yet, even as the dancers spread across the space, their movement felt restrained and safe. Were they simply constrained by the sculptures, being careful not to topple them, or were they intentionally limiting the end range of their limbs and energy of their dancing? A synthetic beat and more kinds of droning chimes joined the sound of water. The lights turned blue. The group returned to examining their new and unfamiliar bodies, individually, and the eye was once again given multiple points of focus as hips gyrated, ankles rotated, knees flexed, legs swung and toes scraped at the floor.

Finally, Laura Briggs entered as the lights overhead brightened to white. Two dancers stomped across the room in a sort of mazurka while the other three dancers held court, backs to the audience, while tracing large, slow circles with their hips. What felt like short sections earlier were now even shorter vignettes. Soon everyone was trembling in place. Surbey continued to shake where he stood, long after the others peeled off, then began slicing through space.

Phillips is also a poet, and the starting point for her words and this work was an inquiry into chaos, entropy and the unpredictable behavior of weather. With this statement in mind, it was surprising how contained most of the dancers’ movements were; absent was any kind of eruption, explosion or loss of control. There weren’t any big storms, and for the most part, the tempo rarely took off from its slow metronome pace. The dancers didn’t partner or even collide. And until one glorious moment, near the end, when Guyton bumped a string of glass beads dangling inside of the sculpture near her, they didn’t interact with the sculptures in any tactile way. While clearly Phillips is not keen on being literal, and the idea of chaos lived in the lack of formal structure and the random individuality that dominated most of the phrase work, all of this seemed a missed opportunity to build multiple, and perhaps more physically dynamic, layers of meaning into the work.

For the next half, nothing new was really built up, but rather the dancers continued on in their own weather systems. These insular studies became quixotic exercises. Had the work gone on longer, for a more extreme duration, they might have had a chance to be more transformative experiences.

The unique qualities and presence of each performer was simultaneously highlighted and muted by the neutral costumes of Anicka Austin and Marian Austin, cut in differing styles from the same silvery cloth. The garments harmonized with the best parts of Phillips’s composition: a sort of monotone field that upon closer inspection or longer viewing, like Agnes Martin’s “white” painting Love or one of Robert Irwin’s dot paintings, is actually composed of individual, and varied, tones. Hit pause on any given moment, and the audience might discern toes wiggling, fingers unfurling, arms slapping, legs like pendulums, in a sea of grey.

Simultaneous solos met with the temporary relief of unison motion, while the lights continued to change color and the sound devolved into a slow dirge. The concept now clear, it seemed a shame that the audience was seated on two sides, as it would have been so satisfying to be able to move around the sculptures and dancers, to study their particularities from different vantage points. Near the end, there was a palpable softening in all of the performers’ bodies as they took to their knees. Their arms crossed their bodies as before, though this time they rocked themselves, all facing different directions. The tops of the sculptures, with their four compass-like points, seemed to scatter them in all directions as their eyes drifted skyward.

Beyond the artistic relationships and the sense of occasion, the Work Room did not seem like an optimal venue for this piece. Phillips’ choreography, made in collaboration with the other dance artists, had a light, ephemeral touch that could have had a bigger impact had it been pushed even further outside of her comfort zone in terms of time and space. Viewing such personal weather systems over multiple hours, in a much larger gallery setting, is perhaps only one of many options. Though the Work Room is now closed, gratitude remains abundant for the support the space and its staff provided to these emerging, experimental artists in Atlanta.