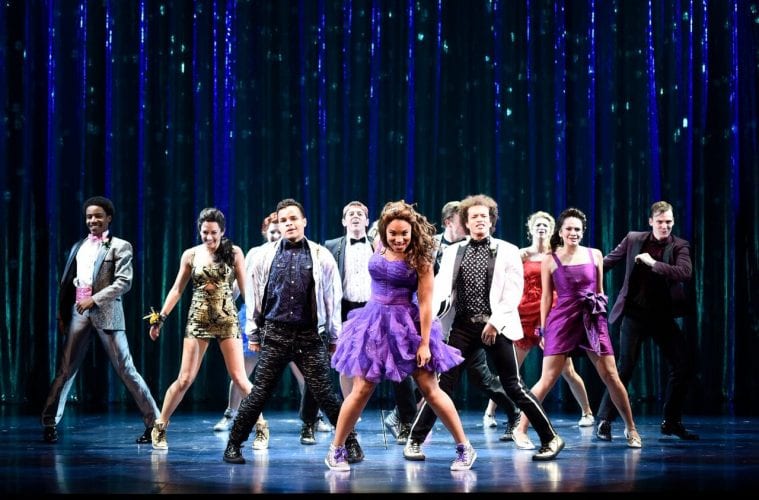 Review: In an uneven Alliance premiere, “The Prom” is still polishing its Broadway steps

Broadway recycles, dutifully repackaging stories and ideas that have already been consumed by risk-adverse audiences in another form. With that in mind, what could possibly be more familiar and beloved, more evocative and reviled, what cultural institution carries more associations, than the high school prom?

In some ways, the new Broadway-hopeful musical The Prom, at the Alliance Theatre through September 25, hopes to score big in the same territory as The Lion King and Hairspray. As a cultural touchstone, proms are about as universal as it gets, and even better: no one owns the property, so there’ll be no need to send a check to Mr. Disney.

The Prom tells the story of Emma (Caitlin Kinnunen), a lesbian high school student who initiates a controversy in her small Indiana hometown when she invites her girlfriend to the prom. (Her situation and some of the developments closely parallel the real 2010 case of Mississippi high school student Constance McMillen.)

Emma’s cause soon becomes a cause célèbre, and four down-on-their-luck Broadway stars, who smell the célèbre as much as the cause, descend on the town in the hopes of rebooting their flailing careers by helping Emma out. The show is ostensibly about Emma and her prom. But it ends up lurching in a surprising, though not entirely unsatisfactory, direction, offering a satiric look at Broadway, the cult of celebrity and all the attendant excesses.

Along the way, the show cooks up a passable number of colorful scenes and fun numbers. Broadway veteran Casey Nicholaw both directs and choreographs, and the dance, perhaps unsurprisingly, ends up as some of the most compelling and energetic stuff onstage. Especially nice is an early scene of fast-paced dancing at a boozy, late-night Manhattan showbiz party. It’s the first of The Prom’s genuine Broadway-style thrills and though there are some other nice moments later, it remains one of the most compelling of the evening.

But overall the show ends up feeling too crowded and unfocused. The Atlanta run occurs early in the show’s life (or such is the hope) and every possible number and every possible joke has seemingly been left in place to see what floats and what doesn’t. This is a fine strategy at this early stage in the show’s journey, but Atlanta audiences should know in advance that at two-and-a-half hours, they’re in for a long evening. Those who are loving every minute of it will certainly get their money’s worth; those who aren’t must buckle up for the bumpy ride. Some of the jokes hit the mark, others hardly seem like jokes at all, and the show certainly needs to lose a number or four.

Some of the efforts to reach young people — such as contemporary references and hip-hop style moves that pop up in the second act — feel creakily effortful. And strangely enough, though the subject is current and topical, the show lacks a heftily idiosyncratic aesthetic point of view, which such hit shows as Book of Mormon, Hairspray and Hamilton have in spades.

There’s a conscious effort to be evenhanded in satirizing everyone concerned, a strategy which, coupled with the show’s namby-pamby, predictable-as-paste message about tolerance, ends up making things bland.

The comically self-involved Broadway stars are fun, but at times Emma becomes peripheral in her own story. And ultimately, the show is obligated to show us the cathartic transformations of a huge lineup — Emma, her girlfriend, the four Broadway stars, the principal, the classmates, the parents and so on — so we often end up in emotional territory far from center. A lovely, tender song sung by the high school principal (Martin Moran) about the fragile hopes behind ordinary people’s celebrity worship is the evening’s strongest ballad, but isn’t the show supposed to be about, uh, a prom?

The cast does a fine job with the material, but especially notable is the appeal of Kinnunen as Emma. She maintains an effortless naturalism, and there’s a convincing everydayness about her stage presence that’s surprising and delightful in this setting. She always seems like someone you might conceivably know or meet, which turns out to be a wonderfully touching quality as the character’s troubles pile up and the comic types she encounters get wackier and wackier.

The Prom has an appealing concept, there are some cute numbers and a likable cast, but somehow all that singing and dancing never coalesce into something that truly hits us in an intensely personal place, which is what the best musicals manage to do. The need to find approval from others is not the most dramatically compelling, sympathetic or attractive of traits, and one sees it not just in the main character Emma, one feels it in the entire production. There’s something unpalatable about this show in its desperation to be liked; it all but drops to its knees and begs for it.

While I wasn’t especially pleased, it’s hard to predict what others in Atlanta (and possibly New York) will make of The Prom. In the end, it may be just like the prom itself: some will treasure happy memories, others will harbor regrets, and still others will be thankful they ignored the hype, gathered a pack of their fellow misfits and went to the movies instead.