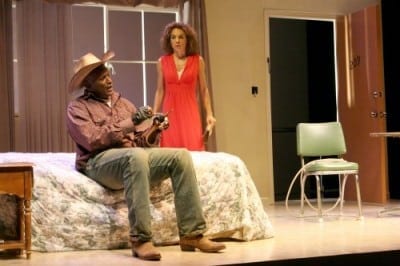 Sam Shepard’s “Fool for Love” is an actors’ play, with two roles that allow for a rip-roaring evening: raw sexuality, rough physical tussling, comic bits and wistful monologues. Whether it’s a great play for the audience, despite its generally strong reputation, may be another matter.

But Atlanta audiences who come to the latest local version, by True Colors Theatre Company, will do so for the all-star casting: Kenny Leon as Eddie and Jasmine Guy as Mae. It’s the acting equivalent of being able to watch Michael Jordan and Magic Johnson in their prime going one on one for an evening. In the intimate Balzer Theater at Herren’s downtown, where “Fool for Love” is playing through June 11, their explosive performances feel as if they’re duking it out in your lap. 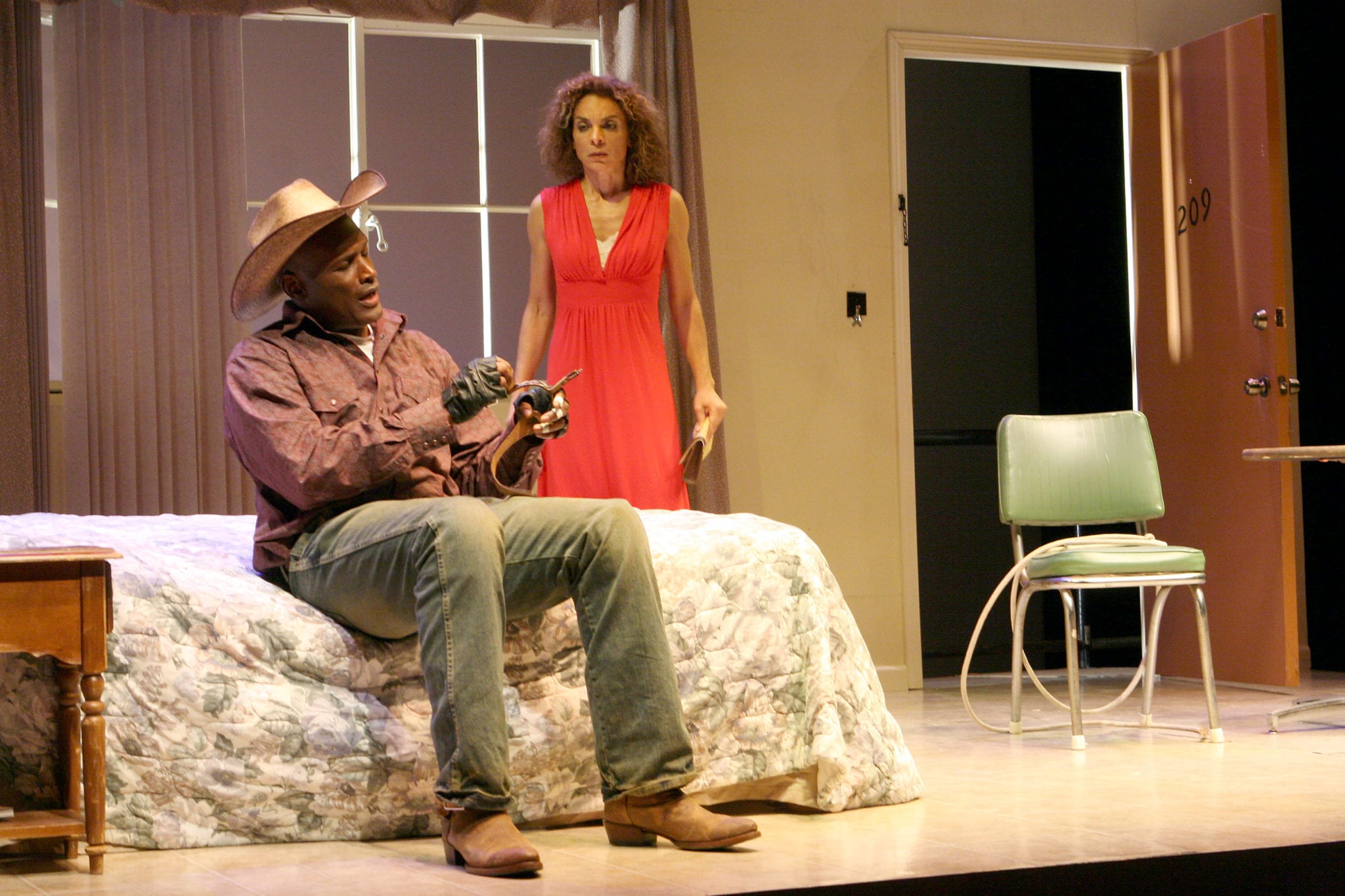 The setting is a seedy hotel room in the Mojave Desert, where Mae — worn, damaged, but still sexy — lives. Eddie, her on-and-off lover of many years, has returned to lay claim to her, and the two go at it hammer-and-tongs for an hour and 15 minutes, puking up their tortured past, drinking, cussing, wooing. Also on hand are an Old Man (Atlanta veteran Larry Larson), who sits just outside the hotel room sipping bourbon and contributing comments, and Marvin (Enoch King), a gentleman suitor of Mae’s who comes in midway and finds himself way over his head.

Leon, who founded True Colors, has been busy being one of the foremost theatrical directors in the country, with a stellar string of Broadway hits, and it’s a joy to see how dominant he still can be as an actor. As Eddie, a fading alpha male who fancies himself a Marlboro Man, Leon is the personification of male cockiness masking insecurity, cleaning his shotgun, guzzling tequila and getting louder and rougher the more Mae puts him off. 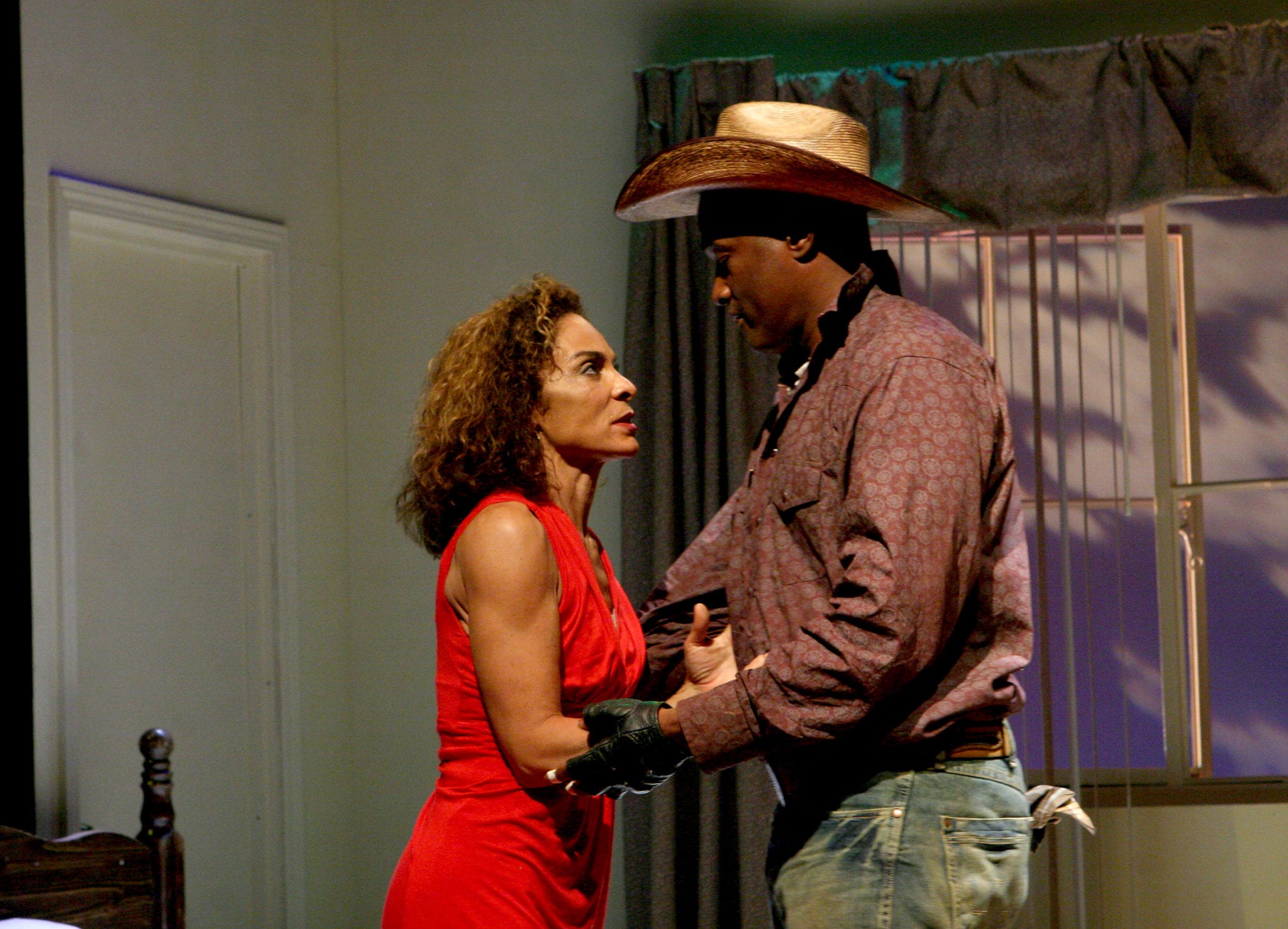 Guy, who came to fame in 1987 playing spoiled Southern belle Whitley Gilbert on the sitcom “A Different World,” now lives in Atlanta and is producing director for True Colors. At 48, she’s still gorgeous and mighty buff — check out the muscle definition in her arms — and she works Eddie over like a heavy bag, literally, at one point, giving him a knee to the groin that is felt by every guy in the audience.

Shepard gives us two characters for the ages, a cowpoke version of George and Martha from “Who’s Afraid of Virginia Woolf?” or Shakespeare’s Kate and Petruchio without the tidy ending. But even with all the great speeches and well choreographed moves directed by Todd Kreidler, “Fool for Love” ends up feeling as if the whole is less than the sum of its parts. That’s a failing of the play and certainly not of these actors.