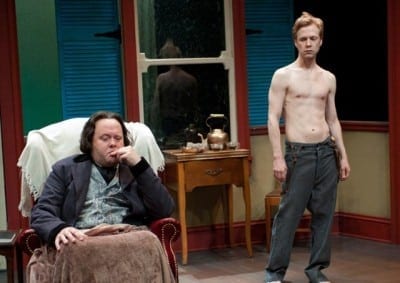 British playwright David Hare’s “The Judas Kiss,” running through June 11 at Actor’s Express, is a reminder that the story of Lord Alfred “Bosie” Douglas (Clifton Guterman) and Oscar Wilde (Freddie Ashley, Actor’s Express artistic director ) deserves its place in the annals of notorious romantic bust-ups, from the invented (Romeo and Juliet) to the actual (Sid and Nancy). As steeped in longing, cross purposes and self-destruction as any of their heterosexual competitors, Oscar and Bosie’s story bridges the simple tragedy of doomed love on one side of history and the modern dilemma of identity politics on the other. 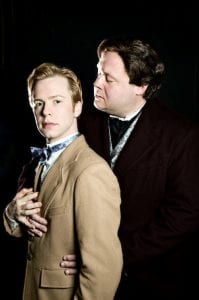 The story begins in a London hotel room in 1895, in the midst of a sensational trial in which celebrated Irish wag, poet and playwright Wilde has initially accused Bosie’s father, the Marquess of Queensbury, of libel for calling Wilde a “sodomite.” But that charge has been wrested away from Wilde as he now stands accused of “gross indecency,” a crime that comes with a parade of gay prostitutes as witnesses and an inevitable tenure in the big house.

Divided into two acts, “The Judas Kiss” opens in that pressure-cooker London hotel in the hours before Wilde is confined to prison and then, in its second act, finds Oscar and Bosie in exile in Naples after the playwright has served his sentence.

“The Judas Kiss” is a play alive with the thrill of language, and words pleasurably rolled around in the mouth in a way that few contemporary dramas can equal. Though the historical record of Wilde’s imprisonment and death at age 46, destitute, is inarguable, the opening scene nevertheless bristles with tension and a sense of claustrophobic entrapment as reporters and police tighten their stranglehold on Wilde. Through no fault of the actors, the second half is less engrossing, perhaps because like all beach towns off-season, Naples is a drag. And the predestined downward spiral gives the second act a listlessness poorly matched with the glossy, robust first act still alive with potentiality.

Wilde’s hotel room runneth over with warring agendas swirling around him, in the person of his former lover Robert Ross (a very fine Christopher Corporandy) and his present flame Bosie. There is the distinct possibility that Bosie is using Oscar to get back at his aristocratic father, but the playwright remains painfully enamored nevertheless.

And who wouldn’t be? With his butterfly blue bow tie and camel, nipped-waist coat (expertly assembled by costume designer Elizabeth Rasmusson), Bosie is the very picture of sartorial self-regard, every gesture of cruelty drawing the helpless, beauty-drunk Oscar deeper into his dandy trap. With his delicate features and butterscotch hair, Guterman is a Steiff bear with agency, expensively adorned and irrepressibly adorable. Petulant, needy and desperately self-absorbed, Bosie is never as reprehensible as we long for him to be. Like Oscar, he carries the burden of social disdain for his predilections, and he wears that burden like cement shoes throughout the drama. He may appear carefree, but it feels like as much of an act as Oscar’s aloof brilliance. The pitifully sudden way Bosie clings to his mother when she promises him forgiveness from the scandal of homosexuality shows as much his need for acceptance as his shallowness.

Deeply lovable in his own right as Oscar, Ashley, aided by Hare, reminds one of the truth that even cultural icons and intellectual heavyweights carry the pulpy marrow of heartbreak, hurt feelings and a yearning for acceptance within them. Ashley’s Wilde is, of all things, huggable, an idea emphasized in the number of times Bosie buries his face in Oscar’s prodigious, expansive chest. If Bosie is using Wilde to get back at his daddy, David Crowe’s direction for Actor’s Express suggests that the interaction of the men, their physical dissimilarity, could lead a Freudian to imagine Oscar as Bosie’s daddy substitute.

In this age of oversharing, it is refreshing to see Oscar Wilde’s sublimated pain and his expert wielding of the also lost art of charm to mask his anxieties. Ashley is skilled at conveying both the emotional pain in his predicament and the intellectual remove that simultaneously makes every experience an opportunity to measure, observe and craft art out of life.

Existentially sapped by his trial, Wilde becomes listless about changing what he imagines as the course of fate. In Hare’s hands, “Judas Kiss” is the ultimate exercise in self-referentiality: Wilde can’t stop seeing himself as a character in a play long enough to clutch at the safety valve of agency. As with all tragic romantic heroes, you long for him to write himself out of this one with that barbed and imaginative tongue, all the while knowing in your heart that he is doomed.