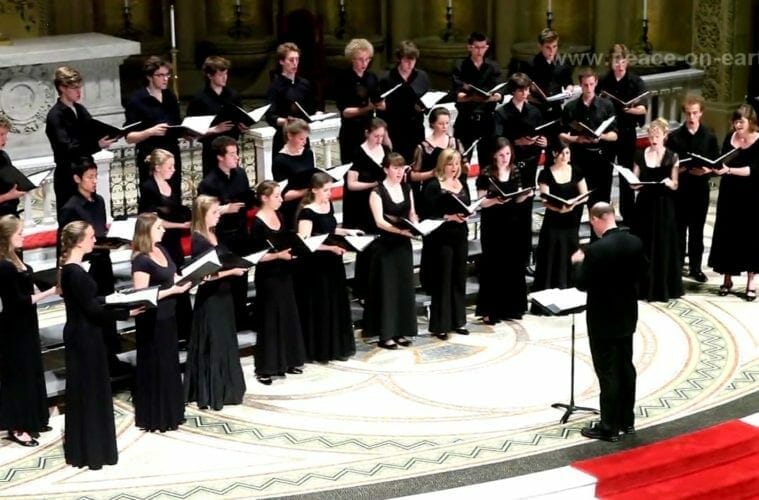 The Choir of Trinity College Cambridge is one of the most lauded choral groups in the world.

Founded in the 14th century, the Choir of Trinity College Cambridge is today a student ensemble with an international reach. In recent decades, this very English choir has excelled at what might be called “pre-Brexit” ideals. They tour the world (Australia to Japan to Zimbabwe) and sing inclusive repertoire that spans from ancient carols to living composers of diverse Christian faiths, but always within what’s today the Anglican choral sound world — what one scholar described as “hovering between magnificence and restraint.” It’s music of power and privilege, to be sure, but with “a gentle, affirmative radiance.”

Led by music director Stephen Layton, the choir is the darling of the British press. Normally judicious publications, like Gramophone magazine, trip over themselves in praise of the choir’s every recording. Given the matriculating membership, that praise goes to Layton’s skills in choral training and effective programming.

Friday evening, in Atlanta’s Cathedral of St. Philip, the Choir of Trinity College delivered on that effusive praise: the smiling young choristers sang beautifully and in perfect balance, every phrase polished for maximum clarity, each piece a complement to the full program. As befits a choir whose main function, during the school year, is singing the liturgy in the Trinity College chapel, their style is unmannered, focused on the texts, with a gorgeous, zen-like monotony of sound.

To combat this effect, Layton broke up Friday’s concert into four short, a cappella sets, everything memorized, separated by pipe organ interludes. The opening group of early-music all-stars helped explain the shifting religious allegiances of Trinity College, which for several generations flipped, often violently, between Catholicism and Anglicanism.

As Layton mentioned in his introductions, the Trinity choir worked with William Byrd in the early 1600s. Byrd’s “Sing Joyfully” and “O Lord, make thy servant Elizabeth” are exquisite pieces of church-state propaganda. When they sang the last words of “O Lord” — “. . . and give her a long life, even for ever and ever. Amen” — I suspect the capacity audience at St. Philip’s had a newfound appreciation for life in the English court. Next we heard Byrd’s teacher, Thomas Tallis, a supreme master of Renaissance polyphony. Tallis’ “Salvator Mundi” shows a sensualist at work, serene and somewhat melancholy.

I could have listened to a full evening of this glorious old stuff — so ethereal and divinely substantial, so perfect — but thankfully they took us farther afield. A set devoted to praise for the Virgin Mary included “holy minimalist” composers Arvo Pärt and John Tavener, including the latter’s “Mother of God, here I stand,” drawn from one of Tavener’s 1990s “happenings,” the seven-hour “Veil of the Temple,” with global musical influences (Eastern Orthodox, Judaism, Islam, Hinduism, Buddhism) and intended to be performed through the night until dawn. “Mother of God” was perhaps the evening’s only stumble, where the young men of Trinity lacked the cavernously deep bass voices, so prominent in the Orthodox service, that the music requires. It sounded thin.

The evening’s most wild and moody set had no cohesive link — except by each song’s stand-alone creativity. “The Heavens’ Flock,” by Latvian composer Ēriks Ešenvalds (born in 1977, studied at Trinity) has a slight pop tunefulness with an emotional gravitas beyond all expectation. It’s a setting of the beautiful poem by Paulann Peterson, where a humble shepherd is singing of the stars above, building his own bonfire, yearning to make a connection . . . to nature, to God or, achingly, to himself. Ešenvalds’ scene painting is dazzling, as when the choir sings “and lichen crusting such dead limbs glows silver, glows white” and the high sopranos sing a halo around the words, glowing silver, glowing white. We hear the presence of the shepherd’s humanity, and of the divine.

Morten Lauridsen’s often-heard “O magnum mysterium,” a motet for Christmas, is among the best-known American choral works of recent decades. Dense and otherworldly, the music demanded a moment of contemplation afterward — which Layton gave us, mentioning its intense spirituality. It’s this sort of “post-postmodern” repertoire — a retro traditional attitude delivered in a very self-conscious style — where perhaps the Trinity Choir is at its most brilliant. They’re the ones creating, in real time, the template for how it should sound.

Two sacred works by Herbert Howells, perhaps the most performed English cathedral composer of the 20th century, closed the formal program. Deeply conservative, he was a skilled craftsman in awe of the great Anglican legacy. “Take him, earth, for cherishing” was sung at a memorial service for President Kennedy in the 1960s. And Howells’ “Nunc Dimittis,” a standard for Evensong, is equal parts enriching and mild. It’s choral comfort food: familiar, high in calories, satisfying even on first listen.

As an encore, the choir sang another “Nunc Dimittis,” this one with the composer in the audience. Ethan McGrath studied with Layton at Cambridge and is now based in Chattanooga. His “Nunc,” from 2018, is bright, tender, free-flowing and very traditional — the latest in a choral style that goes back some 500 years.