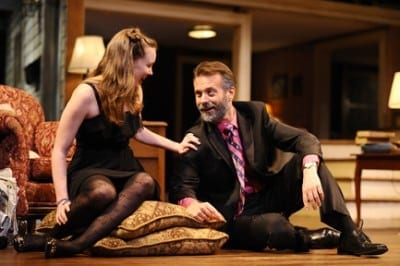 An “All in the Family” for the New Yorker set, “August: Osage County” features a dysfunctional family whose erudite vocabulary and references to T.S. Eliot probably wouldn’t have flown in Archie Bunker’s Queens. But the play has a comparably cloistered, claustrophobic view of family life and the festering rage that can simmer between parents and children. “August” is filled with obnoxious, despicable people who are nevertheless incredibly entertaining to watch as they pick each other apart like vultures after roadkill. If cruelty was a sport, the Weston family would be gold medal winners. (The play runs through May 8 at the Alliance Theatre in Atlanta.) 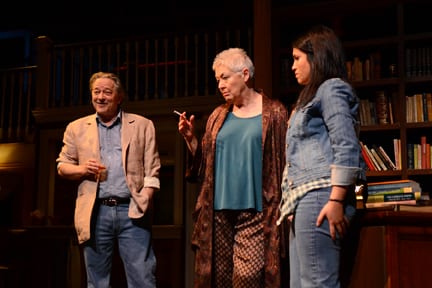 Penned by nationally celebrated playwright Tracy Letts (“Bug,” “Superior Donuts”), “August” is Tennessee Williams for 21st-century Okies. It unfolds in that hothouse state on the Great Plains, a place made even steamier by the closed-room, low-boil dysfunction of the Weston clan. The family is headed by devouring, demonic mother Violet Weston (Brenda Bynum), whose idea of witty banter is telling her husband “Why don’t you go fucking fuck a sow’s ass?” and whose helpful fashion pointer for a style-impaired child is “You look like a lesbian.”

The play’s catalyst, as in so many domestic dramas about over-sharing, is a death: of the family’s hard-drinking, poetry-writing patriarch Beverly (7 Stages Artistic Director Del Hamilton), who has popped up water-bloated and blue in the local lake. There’s nothing else like mortality to provide a symbolic campfire for folks to gather around and speak their piece. It clearly doesn’t take much to get this clan spewing, but when they get going, the ensuing verbal conflagration is like gasoline on that campfire.

Violet is a pillhead perpetually swaying in a pharmaceutical fog. She’s pitiful when it suits her purposes and fear-inducing the rest of the time. In her usual tongue-lashing benders, Violet berates her kin for the mere fact of their existence. Her three daughters — Ivy (Carolyn Cook), Barbara (Tess Malis Kincaid) and Karen (Courtney Patterson) — have returned to Violet’s sweltering Oklahoma homestead in the wake of their daddy’s death. A family with a genetic adaptation of expert highball-grips, the sisters lament their mother’s drug addiction while hypocritically self-medicating with wine and whiskey.

It’s hard to know where to look as this family of natural-born adversaries gathers steam. The action unfolds on the three-level set and multiple planes of action of the Weston home, a kind of dollhouse cross-section that gives a distinct feeling of eavesdropping on private lives. Pacing and raging across the see-through architecture are academics Barbara and Bill (Chris Kayser), a long-married couple who are divorcing following Bill’s affair with a student. Narcissistic, token neurotic-singleton sister Karen has brought along her mover-and-shaker boyfriend Steve (Joe Knezevich), who boasts a distinct absence of moral boundaries; together they serve as emblems of the fast-money, brain-dead volk of Florida. Also on board are overlooked, sexless sister Ivy, who harbors a secret incestuous crush, and Violet’s shrill sister Mattie Fae Aiken (Jill Jane Clements), whose guilt over a past transgression is poured into a bottomless hatred of her only son, Little Charles (Andrew Benator). The family members seem to feed off of one another’s sadness and rage, goading each other to greater heights of insult and degradation. 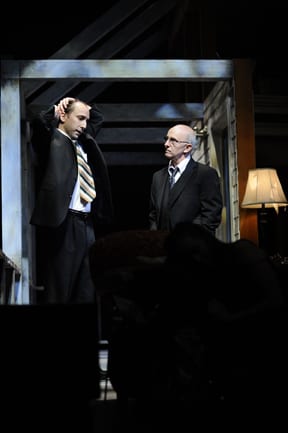 The production, enthusiastically rendered by Alliance Artistic Director Susan V. Booth, is knee-deep in local talent, including the astoundingly good Richard Garner, artistic director of Georgia Shakespeare, as the snide, good-humored and put-upon husband operating in the wings of his wife Mattie Fae’s epically destructive drama.

His Charles has an authentic self-effacing, subject-changing frumpiness that feels like watching some version of your own family member on stage. His pitiful, sad-sack son Little Charles, played with nuance and pathos by Benator, is equally captivating — both screw-up and whipping boy, and as utterly believable in all his squishy anxiety as Garner’s impersonation of his dad. Asked to drop a green bean casserole in perpetuity night after night as the hapless son to the judgmental Mattie Fae, Benator is a man doomed by fate to make his mother despise him. 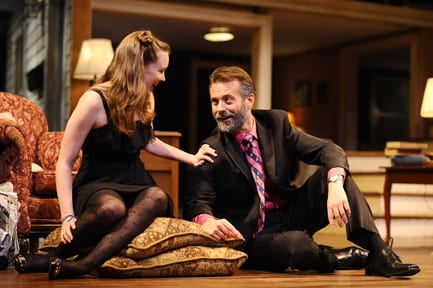 “August” is like a family reunion of Atlanta’s multigenerational acting talent, from old guard Hamilton, Garner and Bynum to thespian babes Bethany Anne Lind (photo above, with Knezevich) as Barbara and Bill’s pot-smoking cineaste daughter and Diany Rodriguez as the Native American housekeeper and outsider who observes the dyspeptic Weston doings much as we do, through a prism of disbelief.

The winner of the 2008 Pulitzer Prize for Drama, the Tony Award for Best Play and the Drama Desk Award for Outstanding Play, “August” continues in a grand theatrical tradition of plays about screwed-up families, from Anton Chekhov to Tennessee Williams to Eugene O’Neill. In its Atlanta incarnation, it’s a raucous, hell-bent Rabelaisian thrill ride toward self-destruction, ornamented with arch dialogue, snappy rejoinders and the kind of bad behavior that makes normally dysfunctional families seem like the Cosbys by comparison. From the raging Brenda Bynum to the more subdued but equally affecting Andrew Benator, it is a furious exorcism of the destructiveness of home and family in an America that likes to pretend that home is where the heart is.