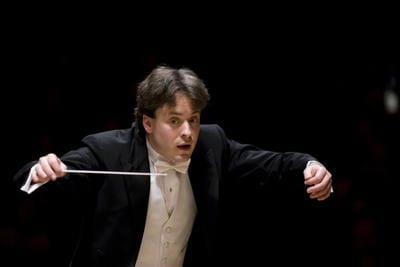 In the past two weeks, Atlanta Symphony Orchestra programs have looked routine — stock groupings, on paper, of 19th- and Romantic 20th-century works that are pleasing to the ear and would likely prompt the more conservative subscribers to exclaim, soothingly, Now wasn’t that nice!

Last week’s concert flipped expectation, thanks to the dazzling insights and charisma of the guest performers. The orchestra, as a result, played near their best.

This week, no such luck. Thursday’s concert in Symphony Hall, conducted by Julian Kuerti (below) — the son of esteemed pianist Anton Kuerti — opened and closed with depictions of the sea, and the nautical bookends neatly summarized the evening’s trajectory. 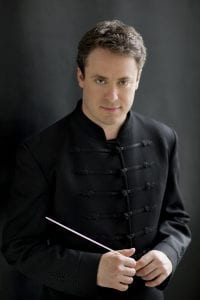 Mendelssohn’s “Calm Sea and Prosperous Voyage” is a lovely and mild tone poem based on two poems by Goethe. Kuerti’s emphatic baton technique and thoughtful, perhaps careful, interpretation brought out taut playing and a restrained lushness from the orchestra, or so it seemed. But by concert’s end, an hour and a half later, Wagner’s “Flying Dutchman” Overture was a mess — craggy and ill-focused, with missed notes and big chords out of alignment, the culmination of a deteriorating conductor-orchestra relationship.

Kuerti led Beethoven’s Symphony No. 8 as a muscular and heroic follow-up to the composer’s Seventh Symphony — instead of treating the Eighth, more properly (to my ears), as a nimble, Classically inspired work, affectionately reminiscent of Haydn. There are many ways to success with Beethoven, of course, but the ASO never bought into Kuerti’s argument, and the whole thing lacked finesse and sounded lackluster. (There were fine individual contributions, notably from bassoonists Carl Nitchie and Laura Najarian.)

The repertoire did not help matters. Simon Trpceski, from Macedonia, is the sort of extreme piano virtuoso who can deliver chiseled-clean performances of the most demanding concertos with apparent ease. I’ve heard him in recital and on record where his Chopin, Debussy and Brahms are lucid, imaginative and deeply felt. He’s one of the great living pianists, here making his ASO debut.

Alas, he was soloist in Rachmaninoff’s Piano Concerto No. 4 — the least admired of the brilliant pianist-composer’s concertos — a work that goes through the motions of epic monumentality and tender emotion, but where too much comes off as filler without a meaningful statement. Although Trpceski (pronounced “trip-CHESS-key”) easily covered the torrent of notes, he didn’t seem to put his shoulder weight into the keyboard, relying on hands and wrists for volume. The orchestra often swamped him out.