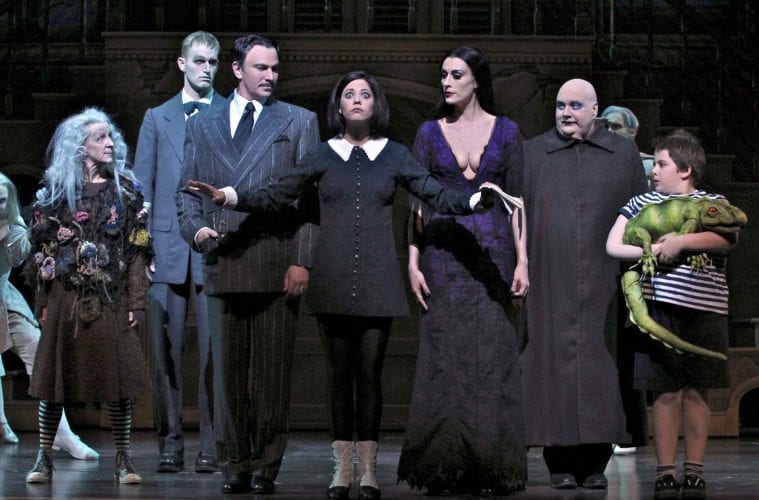 Review: They’re still creepy and kooky, but “The Addams Family” at the Fox is too blandly familiar 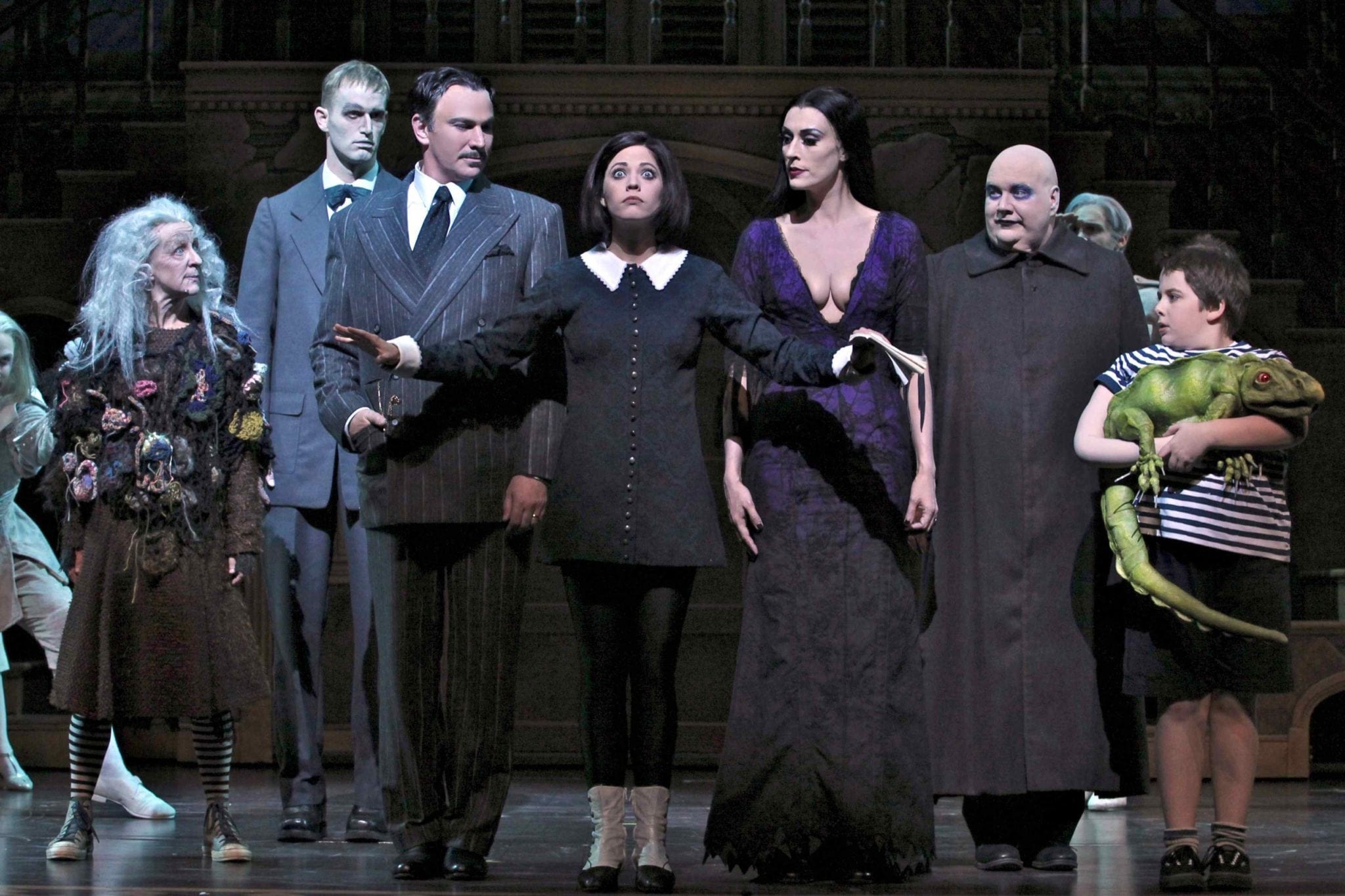 It’s hard now to look at the original Charles Addams one-panel New Yorker cartoons without overlaying the later television and movie images on top of them, but even a quick consideration still reveals their superiority to all the derivations. There’s an edginess in them that TV situation comedies, movies and stage musicals all lack. The cartoons provide a brief moment of recognition at the macabre, slightly subversive inversion of prototypical American family life.

The family is quieter, more mysterious and more dangerous in the cartoons, their motivations and identities more elusive (the cartoon characters didn’t even have names, which were created for the TV show). We never find out what their habits amount to or how the Addamses might feel about being thought odd by others. It’s not part of a narrative, it just is.

In an Addams cartoon, families in the neighborhood might gather to go caroling door to door at Christmas, but the Addams family gathers on the roof to pour boiling hot oil on them. We see the carolers, the oil in the cauldron at the tipping point on the roof, the family lined up behind it. This is something the TV characters simply could never do, trapped as they were in narrative (scalded skin and third-degree burns on children just not being funny).

The TV show relied on an entirely different, more generic sort of humor, one that comically and reassuringly suggested that the American nuclear family unit was so resilient and universal that it could be transferred to any setting, any context, any time period and remain intact. Whether it was “The Jetsons,” “The Flintstones,” “The Munsters” or “The Addams Family,” wives spent too much at the store, daughters danced to weird new rock ‘n’ roll music, sons got into mischief at school, etc. It was amusing (these were popular comedies, after all) to see that even cavemen, space colonists and the macabre all had the same problems. And no matter how unusual it all seemed, they were still always a family where everyone knew their place. The laughter was canned, and much of it depended on repetition and familiarity.

Those who go to the new musical “The Addams Family,” at the Fox Theatre through August 19, wanting to see a stage version of the TV show with a few songs thrown in won’t be disappointed, for that is precisely what’s on offer. The curtain rises on the whole clan lined up at the gates of a cemetery — this alone gets a round of applause — and the musical takes it from there. Nearly everything you might think to recognize from the TV show is trotted out during the course of the evening: Gomez kisses Morticia fawningly on the arm, Wednesday and Pugsley play macabre games, Lurch moves slowly and talks in a deep voice, we snap along to the theme song, and so on. There’s certainly nothing wrong with this. The result is pleasant, if bland and predictable.

As the TV show often did, the musical creates a narrative out of the unlinked cartoons by having an outsider visit the Addamses. The now teenage daughter Wednesday — she has a stylish bob, and her Pilgrim-collared black dress and black stockings could appear in the pages of Vogue — has fallen in love with a boy. His “normal” parents come to visit the “strange” Addams household for dinner, thus creating the humor.

It’s all made even ookier by injecting contemporary culture wars into the goings-on. The boy’s family is from Ohio, and the Addams house has been moved to Central Park; they’re New Yorkers now.

On the TV show, much of the humor derived from the fact that the Addamses were often blissfully unaware or unconcerned that others found them odd. There’s something more reactionary, self-conscious and besieged about the family in the musical. They’re defiantly strange but doing their best to put on a normal front, as in “The Birdcage.” I mean really as in “The Birdcage.” The set-up, the jokes and the denouement — the unusual clan experiences the challenges of putting on a false front, the strait-laced patriarch and the traditional family loosen up — all seem derivative.

The songs are merely passable. The sets and costumes are lovely, even though they aren’t colorful. The Addamses are in black, a chorus of ghosts are in white, and the sets (more like backdrops) are pretty flat. But there’s a surprisingly lush gothic look that references the cartoons and show without entirely depending on, or neglecting, either one.

Far and away the most inventive and funniest element of the musical is the puppetry of New York artist Basil Twist. There’s a curtain tassel that comes to life, an iguana that’s big enough to move a bed, and Uncle Fester visits the moon in a little fantasy number. Twist’s ingenious designs, such as for a chorus of stars, have a comic, almost freakish level of anthropomorphism about them. Unfortunately, the puppets aren’t in the show nearly enough.

“The Addams Family” TV show seems like one of those things that simply exists, that we’ve all accepted as something that happened. Because we’ve all seen it, some sense of collective affection is felt for its familiarity and ubiquity. This, rather than enthusiasm, seems to be what attracted this musical’s creators to the project. It’s an inoffensive but unimaginative recycling job.