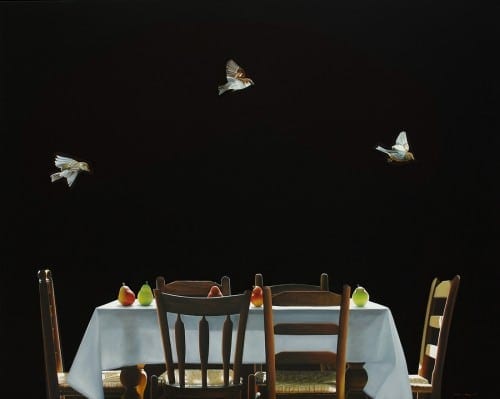 Review: Themes and variations at Mason Murer, plus 150 years of African-American art

With its maze of free-standing galleries linked or separated by open corridors, Mason Murer Fine Art was from the beginning meant to provide a range of essentially autonomous viewing experiences — but ones that are more nuanced than a simple “well, if you don’t like this, maybe you’ll like that.”

The way this functions is illustrated by a minimally surrealist subtheme that shows up in the current exhibit, just inside Mason Murer’s main entrance. C. Dawn Davis’ new paintings are even more disturbing versions of her semi-Freudian, semi-Gothic aesthetic, but one work, “Twittering for the Unconnected,” depicts small birds swirling around a young girl’s head, in a simultaneous joke on social media, social disconnection and psychological dislocation.

Small birds appear in a similarly dark psychological-formalist space above the photorealist table setting of Karen Hollingsworth’s “Navigation” (above), more or less diagonally across the corridor from the entrance wall. Throw in Pam Moxley’s huge photograph of a woman with bird’s nest headgear, which dominates an adjacent wall, and you have the makings of a topic that holds the space together visually even as it leads the viewer in several different possible directions (in more ways than one).

There are, as always, single chefs d’oeuvre that stand out once they are encountered amid the greater body of work (a feast of small surprises, to borrow the title of a friend’s novel). One such might be Virginia Parker’s “20/60 Self-Portrait” (below), a witty takeoff on Norman Rockwell’s famous picture of himself producing an idealized self-portrait by copying the face he sees in a mirror. In the less than perfect vision of reality to which Parker’s title refers, the gray-haired artist sees herself in the mirror as she was at age 20 while painting a self-portrait at (presumably) 60. The commentary on honesty overcoming self-deception, reversing Rockwell’s joke in every particular, is nothing short of brilliant.

Parker’s unconventional still-life portrayals of sliced tomatoes accompanied by incredibly specific types of knives are hung facing an outwardly similar 19th-century still life of “Three Apples and Knife” (below). The latter painting, by Charles E. Porter, introduces this exhibition’s greatest, unstated achievement: a century and a half of work by African-American artists.

Porter’s insufficiently remembered work hangs adjacent to landscapes by Edward M. Bannister and Robert Scott Duncanson that date back as far as 1852. (H.O. Tanner’s biblical scenes round out this mini-survey of 19th-century masters.)

We then jump to the most recent work of three Atlanta artists of different generations. Toby Martin’s newest metal sculpture takes up, in the case of “Companion,” nearly an entire gallery, while the wooden composition “Merkabah” stretches nearly the full height of another gallery wall. (An appropriately complicated piece is titled “Inter-Disciplinary Hybrid Prototype #1.”) The latest iteration of Martin’s inspired longtime theme “The Sculpture Conference” — sculptures representing different styles and aesthetics, grouped around a miniature table — is easily overlooked in such monumental company, but it more than deserves to be looked for.

Larry Walker’s new “Metamorphic Images” series includes the spectacularly mixed-media “Historical Membranes, Veils and Other Forms of Confinement,” which suggests in its collaged canvas bisected by actual metal shackles that the lure of “0% Financing” has led to economic bondage as definitive as the physical chains of slavery ever were. Walker’s oeuvre here, like Martin’s, is too diverse to summarize comfortably, but it’s worth noting that the stooped silhouette leaning on a cane that characterized a previous series recurs in the 2011 lithograph “Spirit Shadow at Dusk” after making a fresh appearance in 2010’s “Yea Though I Walk Through the Valley (Phase Two)” (above).

Fahamu Pecou’s newest self-portraits picturing himself on magazine covers complete this study of personal identity and its (dis)contents. Among the numerous inside jokes is the text in “Fahamu=Swahili for Understanding,” which reads “U can stand under if U can’t understand me.” Pecou appears in his trademark swaggering pose in front of a graffiti wall in “Who Gon Check Me Boo?,” where a speech balloon in the corner proclaims, with underlining for emphasis, “Put paint where it aint.”

By this time we have made a very long journey through American culture, but there are still a lot of Mason Murer’s galleries left to go through. I shall leave those for you to discover — and they are well worth discovering.