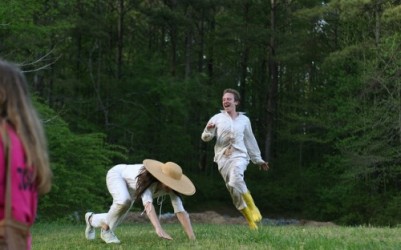 Memorial Drive is a collaborative series by ArtsCriticATL and BURNAWAY about the history of the arts in Atlanta. Putting a fresh spin on the old phrase “memory lane,” the series title also honors its namesake, the long road that runs from downtown Atlanta to Stone Mountain. The series explores the theme of memory, holding that, in order to move forward as a creative community, we also need to look backward. We invite readers to follow, comment and offer ideas for further topics. This article is ArtsCriticATL’s third contribution to the series, preceded by Evan Levy’s essay on public art, then and now and Mark Gresham’s forgotten classical music history.

D. Patton White is one of many who have shaped Atlanta’s modern and contemporary dance community over the past 30 years.

He began dancing at Emory University while studying psychology and philosophy; he joined the Decatur-DeKalb Civic Ballet in the mid-1980s, shortly before that company moved to Decatur’s Beacon Hill Arts Center and changed its name to Beacon Dance Company. White became its artistic director in 1990.

He’s known for layered, multifaceted works, marked by human compassion and a non-elitist philosophy that includes performers of many ages and backgrounds, their personal stories woven into the work. Last year, White created a short 20-year video retrospective, available here.

In 2004 White presented the Mapping Project, a series of site-specific, multidisciplinary, community-based performances in 12 parks and nature centers throughout DeKalb County. From 1999 to 2002, his Elemental Project explored the elements water, earth, fire and air. This season, White is reconstructing all four of those works. He’s also planning to bring together a panel of local contemporary dance pioneers for deeper conversation about the community’s history. Details on that will be announced at a later date.

Recently, White spoke frankly about how Atlanta’s dance scene has changed, the challenges local dance artists face, and how best to survive over the long haul. On a fall afternoon, we sat in front of a big picture window in White’s apartment near Emory, its walls painted in vibrant shades of aqua and marigold and decked with textiles and artwork.

Cynthia Perry: How would you describe the contemporary dance community at the time you started dancing?

D. Patton White: When I came on the scene in the mid-1980s, there was a modern dancer-choreographer named Meli Kaye who had had a company for maybe 15 to 20 years called Company Kaye. She was also a mime artist, so the company had both elements.

A lot of people were working in the late 1970s and early 1980s with a variety of organizations. Several worked with Meli and her company; some of them eventually founded their own companies; some did pickup groups and performances at the Arts Festival of Atlanta. A couple of choreographers, Dee Wagner and Pat Floyd, combined forces and did a lot of work on their own.

Meli had danced with Doris Humphrey, and that style fit perfectly with me — not the angst-y Graham or the kill-your-back Horton. It was a nice, flowing, solid technique. She became a mentor for me as she had been for many people in the city.

Then you have the Dance Unit, led by Leslie Uhl. [This was an interdisciplinary group made up of dancers, performance artists, musicians and visual artists and was part of the Forrest Avenue Consortium.]

Then Lee Harper came into town. [In 1970 Harper joined the Atlanta Contemporary Dance Company, founded in 1948, and she formed Lee Harper and Dancers in 1980.] She had danced with Alvin Ailey, so her work had that style. I danced with her for a while.

My first goal had been to model it after this group called ISO, people who had worked with Momix and had all formed this touring company: Daniel Ezralow, Ashley Roland, Morleigh Steinberg and one other dancer. They were phenomenal performers, but they also had a really great wit about them. I just thought, “what an intelligent model to try to emulate.”

But the reality became clear that touring is competitive and difficult. So I shifted my goals to become more embedded in the community. About that time, in the late 1980s, Jimmy Carter started the Atlanta Project. The intention was to address intown blight: the poverty and hopelessness in the area bounded by I-20.

Arts in the Atlanta Project was a grant program for art projects in the targeted communities. That was when I started doing the community-based work that I’ve been doing ever since. We did a couple of projects in a senior high-rise living facility. We had them share stories from their past, and we used that information as inspiration for site-specific pieces in their backyard area.

Perry: What were some of the events that shaped the local dance community as it is today?

White: There was the Dance Coalition of Metro Atlanta, a service organization for the dance community. It was multi-style — [for] every company that existed in the city, individual choreographers and dancers.

For a number of years they produced the Winter Dance Festival — everybody who was a part of the coalition could be on the program. That was probably in the mid-to-late 1970s, so it may have lasted for about 10 years or so, at least until 1986 or 1987.

When the Dance Coalition went away, Dancers’ Collective, directed by JoAnne McGhee, picked up the festival and focused on modern, or contemporary, dance. They started producing Atlanta Dance on the Loose, an adjudicated festival. If you were selected, it was a big deal. And then when Dancers’ Collective went away, Douglas Scott valued it and decided to start producing the Modern Atlanta Dance Festival.

Also, Several Dancers CORE wrote the grant to the Metropolitan Atlanta Arts Fund to do the Atlanta Dance Initiative, which strengthened 10 different dance organizations in real, sustaining ways. Not all of them have been able to last, but key ones — Ballethnic, CORE, Beacon, Full Radius — have. And Moving in the Spirit, too, I think; it has no peer in the city in terms of its ability to attract funding. It’s amazing, the impact that they’re having on the communities they work with.

The third major event was the Olympics, which had a devastating effect on the dance community. You have stars in everybody’s eyes, but it drove a lot of locals out of town; they were no longer arts patrons for that summer. The funding agencies, both in the public and the corporate sector, gave huge sums of money to support the Arts Olympiad, all organizations and artists from out of town. This meant funding for local entities was down dramatically for the next three or four years. For some, it was the nail in the coffin. It took Beacon many years to recover.

I got real clear after that to be realistic about my budgeting and to not expect anything until that cash is in hand. You know, that which doesn’t kill you makes you stronger.

Perry: It’s not easy to build a dance career here — there’s limited funding, limited jobs. But you’ve managed to forge your own path. What challenges have you faced?

White: Most who work in the modern or contemporary dance idiom here would say that even now, it’s hard to get an audience that seeks experimental or cutting-edge work. The other challenge is that you have people who want to dance and make work, but not much support. So you get a lot of people doing work for free. And even if it’s not completely free, it’s tantamount to being free. And how that impacts the artists is to continually drain them. It also sets up this situation where people don’t expect that they have to pay dancers, or they don’t expect that they have to pay much for a ticket to a performance. So you have this strange situation where you can’t pay the dancers more because people won’t pay more to come see the dance. So which could possibly come first? At the end of the day, the funding has to come from somewhere.

Perry: How have you seen the dance community change over the last 30 years?

White: The biggest difference is this phenomenon that everybody decides they have to form their own dance company. As opposed to having a few larger groups, there seem to be a lot of smaller groups [that often] tend to be younger folks just coming out of college that feel like, “In order for me to do the work I want to, I have to form my own company.” And that’s not necessarily the case. What I have witnessed is that there’s a whole bunch of companies for a while and they all go away and then the next crop comes in. If you really want to spend your time dealing with the headaches of having a company, then more power to you. But if it’s just about making art, there are ways to work with existing companies to make that happen.

The Dancers’ Collective was founded as a true collective. It was a group of about 10 choreographers who pooled their resources [and renovated an old movie theater on Euclid Avenue to become what is now 7 Stages]. The fact that that space exists to this day is testament to what coming together and working together can do.

Perry: Site-specific work has been going on in Atlanta for some time, and you’ve been a major part of that. How did that get started?

White: I started after seeing site-specific performances in New York. I’d seen Dancing in the Streets on television [and live] at Wave Hill. But also being a part of Alternate Roots, where as part of the annual meeting a lot of work is created, wherever the meeting happens to be. I found it fascinating and wanted to try it myself.

I’m a firm believer that you can find art wherever you are. It’s about your frame of mind. Just looking out the window and watching the leaves fall — it’s like this gorgeous performance is happening. One time I was driving along the highway and came across these signs that were almost like the old Burma-Shave signs. Along the highway they’d place these signs, a slogan per sign, every couple of hundred feet. But this series of signs was an art project. All of a sudden I encountered this grand work of public art, and something in me just clicked and I thought, “I would rather be out there just creating art in the public realm, and if people just happen upon it, that’s great.” We don’t always have to get our audience to come see it. There’s an exciting synergy that happens when it’s the unexpected.