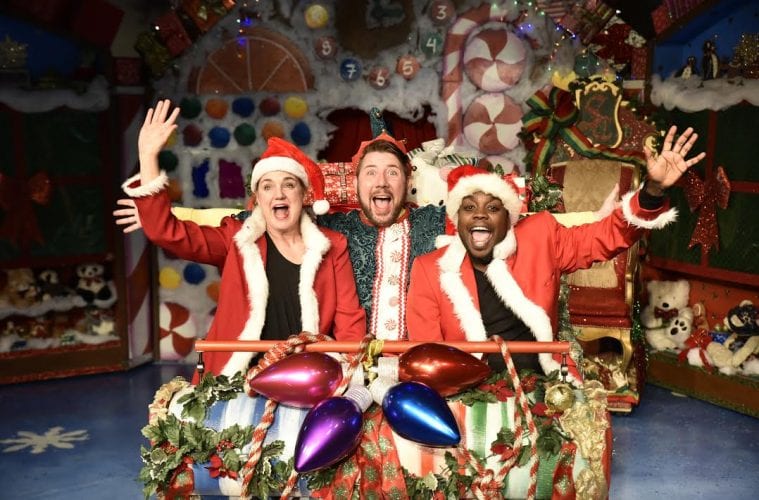 Supposedly one of the holy grails for songwriters is to pen a Christmas standard. Tunes like “Santa Claus is Comin’ to Town” become inescapable through November and December, which means St. Nick can bring royalty checks with his presents.

As a fledgling writer, David Sedaris created the radio (and later, theatrical) equivalent of a Christmas standard with “Santaland Diaries.” Originally read on NPR’s “Morning Edition” in 1992, his essay about being a Macy’s department store elf launched Sedaris’ career, providing a centerpiece to his first book as well as the anchor to a subsequent all-Christmas collection.

On stage, The Santaland Diaries can be compared to a cover version of a familiar tune, like “Santa Claus is Comin’ to Town” by Bruce or Mariah. Joe Mantello adapted the essay as a monologue play in 1996, and Horizon Theatre began staging its perennial production in the late 1990s. Harold Leaver held the role of the Sedaris stand-in for nearly two decades, but has passed the candycane leggings to actor/playwright Topher Payne for the theater’s 19th production.

Directed by Jeff Adler, The Santaland Diaries, through December 31 at the Horizon, is a holiday show for people who don’t necessarily like holiday shows, offering fast-paced fun that can make a striking contrast to the original work.

The narrator describes being a broke would-be writer in New York City, reading a want ad for elves at “Santaland” at Macy’s, “the biggest department store in world.” He applies and makes the cut, despite his open ambivalence about performative Christmas cheer and his certainty that he failed the drug test. He takes the elf name “Crumpet” and trades his street clothes for a whimsical costume.

If you hate the commercialism of Christmas, the store’s elaborate, overcrowded Santaland comes across as the belly of the beast. Crumpet describes demanding customers, terrified toddlers, burned-out Santas and overly enthusiastic elves, with LaLa Cochran and Enoch King making dozens of costume changes in the supporting roles.

It’s been awhile since I last saw Horizon’s Santaland, but I remember Leaver as a highly sarcastic bon vivant. Payne’s performance has a definite sardonic streak, but his Crumpet comes across more as a put-upon Everyman, striving to rise above the affronts to his dignity. And while he’s misanthropic at work, he’s quite gregarious in his audience interactions: at one point he launches into a motivational cheer with a voice worthy of a pro wrestler firing up a crowd.

Sedaris’ radio version is a master class in deadpan humor, with his acerbic observations and wry delivery leaving plenty to the listener’s imagination. Horizon’s production has more of a party atmosphere, with constant activity and sound cues framed by the set’s gift-wrap colors. Sequences that open up the action include a Spanish soap opera fantasy and a reimagination of “Santaland” as “Satanland.”

At times the broad comedy turns downright corny, particularly in a scene that finds bewildered foreign shoppers launching into a few lines of The Lion King. Sometimes the show’s aggressive silliness feels like a world away from Sedaris’ tone of withering understatement.

The production has adjusted its approach to the two “holiday helper” actors, who used to have lines sprinkled throughout the show. As explained in the program, “The authors of The Santaland Diaries conceived of it as a one-person show and as of last year, have required that we revise our production to adhere to their original intention.”

Horizon’s workaround is to have Payne deliver all the onstage dialogue, with Cochran and King lip-syncing the words where appropriate. It makes for some awkward moments, but King in particular seems to thrive without words, whether he’s silently commanding audience members to clap along or playing a small boy in an Incredible Hulk costume.

The Santaland Diaries captures the stresses of working retail during the holidays, which can bring the worst out of employees and shoppers alike. But it also finds room for a grace moment. Crumpet describes an encounter with a Santa he’d never met before, who tells parents the importance of loving their children and each other. Afterward, Crumpet acknowledges that he’s not a good person, but in that moment was “good by association.” The show threads the needle of delivering a positive “True Meaning of Christmas” moment that feels sincere without selling out the rest of its caustic comedy. It’s almost a Christmas miracle.