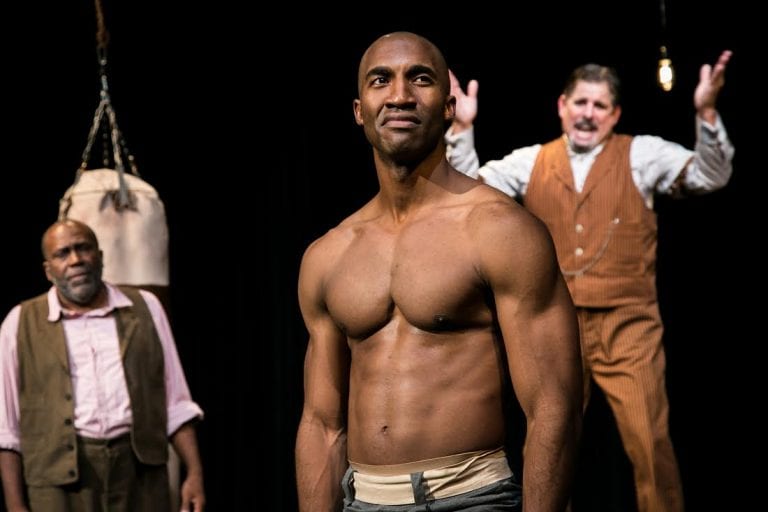 "The Royale" at Theatrical Outfit featured Garrett Turner (center) as a conflicted boxing champ, along with Rob Cleveland (left) as his corner man and Brian Kurlander as a not-so-pure promotor. Photo by Casey Gardner)

Review: “The Royale” deftly, smartly uses a boxer’s dreams to size up the war within

Two men stand side-by-side in a boxing ring. Shoes are laced, belts are strapped, gloves are tight. If looks could kill, they’d both be dead. But the truth is that they are not fighting flesh and blood, but rather the voices in their minds that propel them to win or lose. Hands clap, lights flash, and only one of them will be victorious. This is the intensely moving opening scene of Marco Ramirez’s 90-minute play, The Royale, onstage at Theatrical Outfit through November 4.

Based on the life of Jack Johnson, an African American boxer at the turn of the 20th century, The Royale tells the story of a fictional boxer named Jay Jackson who becomes the first black heavyweight champion. The Royale premiered in 2013 at Center Theatre Group in Los Angeles. As he was known for his bravado, lavish spending habits and affinity for dating white women, this is not the first time that Johnson’s life inspired a stage play. The Great White Hope in 1967 delved into his background, and he was also the subject of Ken Burns’ 2004 documentary Unforgivable Blackness. Johnson was in the first class of inductees into the International Boxing Hall of Fame in 1990.

In Marco Ramirez’s conception, Jay Jackson (Garrett Turner) is an amateur boxer trying to make his way into the pros. He’s fought everyone and won, including a guy fresh off the Navy Yards named Fish (Marlon Andrew Burnley), who he’s recruited to be his sparring partner. Now, Jackson is ready to take on the current heavyweight champion, a white man named Champ Bixby, and he’s depending on his promoter Max (Brian Kurlander) and trainer Wynton (Rob Cleveland) to make it happen. The white public that supports boxing, however, is not ready to see its champion defeated by a black man, and the potential for violent backlash is palpable. When his sister Nina (Cynthia D. Barker) shows up with threat letters from the mail, Jackson has to decide whether the human cost of being heavyweight champion is worth it.

Patdro Harris directs a strong ensemble cast who are so in sync with each other that it seems like they finish each other’s thoughts. Turner, who audiences likely won’t recognize from True Colors’ Holla If Ya Hear Me, is smooth, bold and aggressive as the macho Jackson. Cleveland and Kurlander, both fast talkers whose motives are more selfish than sincere, play off each other like a bass and a trumpet. And Barker, the only woman in this hypermasculine world, delivers a performance that is both tough and heartfelt. Burnley is a newcomer to the Atlanta theater scene, and he mostly rises to the occasion.

The play’s action takes place on a simple set by R. Paul Thomason and features a three-tier platform in the center of the stage with a leather punching bag, a couple of benches and stools in front of a brick wall. Mary Parker’s inventive use of lighting to create the effect of shadowboxing is best described as “cool.” It all works together nicely when key moments in the play are punctuated by flashing lights reminiscent of ringside cameras and the sound of hand claps that sometimes sound like fists meeting flesh.

Ramirez has written a play that is quick like the jazz music that Jackson listens to when he spars, perhaps too quick. This is a play that leaves the audience with more questions than answers about the real Jack Johnson, but not necessarily in a bad way. The history of boxing in the black community, however, is a complicated one that warrants more exploration than is possible in such a short play. As one of the world’s oldest sports, boxing was one of the first ones accessible to African American men because of the low cost of entry and because of white fascination with the physical strength of black bodies. As black men rose in the sport, media depictions of them as inherently violent became more common, and in the play, as in real life, the backlash whenever a black boxer beat a white boxer left men dead. Today, boxers such as Floyd Mayweather and Deontay Wilder are living the character Jay Jacksons dream of being, but that dream was hard won.

In addition to hundreds of opponents, Jackson is fighting Jim Crow. There’s an internal battle happening in the soul of America between the place that black men were expected to occupy as 3/5 of a person (even after the Civil War) and asserting oneself as a man. For all the times that Jackson comes off as all brawn, Ramirez’s script captures that conflict well. That said, no fight seems to prove as difficult as the fight within, and this cast leaves it all at The Royale.