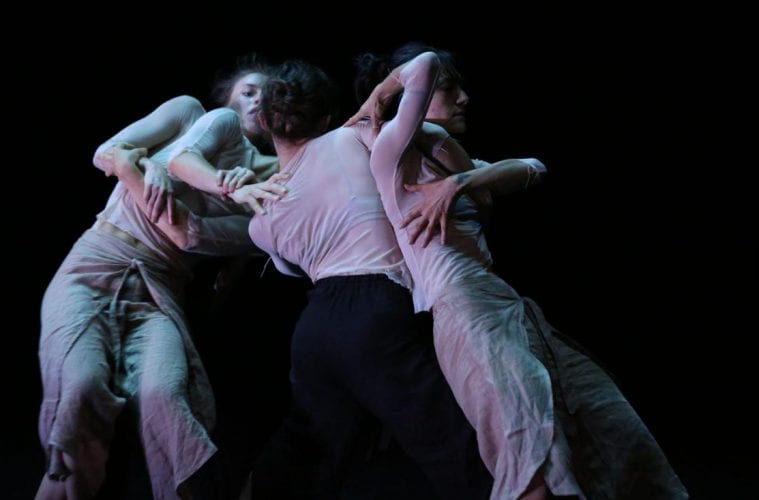 Review: Italy’s Spellbound dance troupe relies too much on dazzling technique at KSU

During an artistically rich and culturally vibrant weekend in Atlanta, Kennesaw State University’s Dance Theater played host to Spellbound Contemporary Ballet from Rome, Italy, on October 12 and 13. Artistic Director Mauro Astolfi along with his ensemble of nine dancers offered the US premiere of their latest evening-length work, Full Moon, scored by various minimalist composers. Astolfi, who is formidably tied to major European dance centers as an influential guest teacher, established Spellbound in 1994 to forge a choreographic/movement journey that “unites pure gestural expressiveness with classical technique and training.”

Full Moon began as a feast for the eyes and imagination but ultimately never quite paid off in terms of exploring its themes. Marco Policastro’s brilliant lighting design instantly framed time and place by dividing the stage into two distinct worlds. The downstage realm was territory where dancers would move within the present. The dark and architecturally lit upstage domain housed the less definable and therefore more satisfying, mysterious moments.

In the most beautiful (and first) moment of the work, the soft edges of two bodies appeared upstage, in a dim beam of light that was strong enough to illuminate the figures, subtle enough to dismiss shadow. The prone female figure rose to connect with the upright male figure who straddled her — she raised her hands and torso to his gaze; he leaned in, directed his energy toward her neck, and the light suddenly vanished. This intense, thoughtful and arresting exchange was brief and inviting. The work, an exploration of our human impulses, abandonment and existential ponderings, came to life.

As the opening image faded into memory, two dancers walked into the downstage space and moved with rarely seen complexity. As if Mozart had commanded each part of their bodies to play countless notes with dizzying speed and precision, the duet was remarkably rich with material and likewise brief. The formula was soon after revealed; duets, quartets, trios would walk into the space, offer their variations on a theme of speed and promptly exit. It was clear: the work was about the dancing.

The dancers in this company are ridiculously accomplished. Each of the nine, finely tuned bodies careened around each other’s surfaces and the air around them with uncanny specificity, slithery grace and precision that mocks the “efficiency” of our industrialized/technological world. With tireless physicality, dancers directed their legs, arms, feet, heads and/or torsos to fly within millimeters of a partner’s face. The intricacy was arresting, delicious and curious.

The most captivating duet found a male and female dancer diving into what felt like thematically relevant material. Both assumed provocative posturing, she on the floor with her legs outstretched in second position, him with his body weight pressing into her. The evolution of the material seized the moment and provided all-too-rare room for introspection into their relationship. The way he folded her agile body into his arms, the way she hid her face, the immensity of the gestures, the puzzle-like intertwining of their legs felt like important elements to consider. They were over in the blink of an eye, never to return.

Equally brief, thought-provoking layers were formatted around shadowy figures that periodically appeared and disappeared within seconds in upstage squares of light. Ghosts of the past, apparitions of our inner demons, primal instincts or suffocated empathetic beings wanted out as much as the other dancers wanted in. Ambiguous and blurred bodies jumped into the air to have their landings silenced by immediate blackouts that followed. Despite this hazy underworld, Astolfi’s investigations of the sense of endlessness and wonder, the ponderous inclinations that seize our adult imaginations when considering space or the “feelings of being lost” were largely unculled.

Full Moon is crafted with an affinity for slickness and dexterity that eventually lost its potency through reiteration and destructive consistency. As when a magician reveals the “trick,” the work’s narrative caved to the radical greatness of the dancers, abandoning the meaningful questions posed in the program notes. Not until the work’s final moments were (thinly) reconnected to the stated intention: the moon. It was the cinematic music, the melodramatic, awe-inspired dancer who gazed toward the heavens, the nude figure who moved laterally across the back of the space and the sounds of howling wolves that spoon-fed a heaping dose of cliché.

The experience of Full Moon was much like touring a European palace. Each room with its ornate, textured décor seems to challenge the next room to keep up with its established standard of excess. At the end of the tour, the exhaustion that comes from opulence can impart a hunger for simplicity and insight into the inhabitants of this decadent, and in this case, moon-lit world.