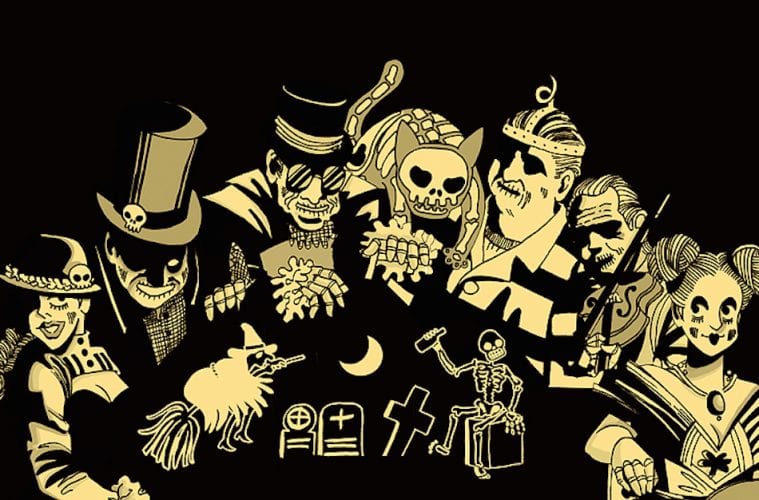 ArtsATL’s top picks for Halloween horrors and treats in Atlanta

From Little Five Points to the West End, from Symphony Hall to the Plaza Theatre, Halloween brings out the freaky side of Atlanta. This town clearly loves the holiday, and so do we.

Here’s ArtsATL’s list of the top arts-related Halloween events in Atlanta we’re most looking forward to. We chose 13 because that’s just how we roll, witches. 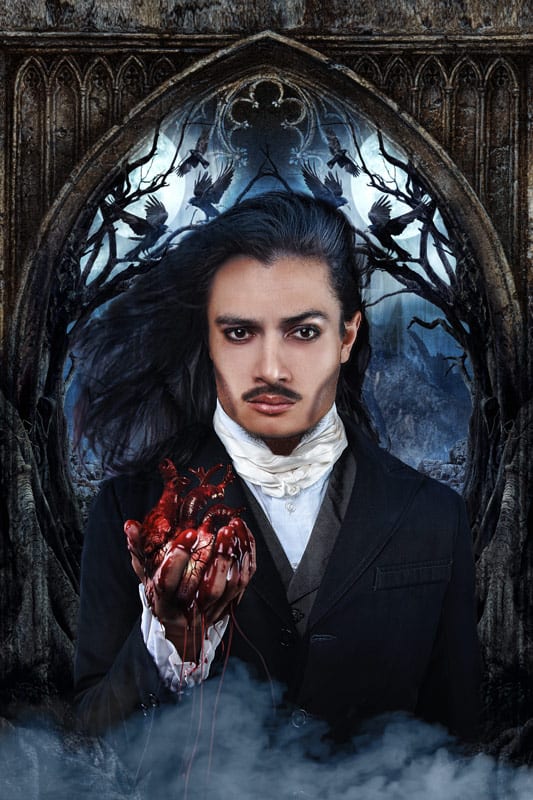 The Edgar Allan Poe Experience brings classic tales by Poe to life at the Wren’s Nest. (Image by BreeAnne Clowdus)

Are you experienced? You’d better be. Created by Brian Clowdus of Serenbe Playhouse, The Edgar Allan Poe Experience brings to life four classic tales of terror by the undisputed master of the genre. The production, which invites audience members to wander, takes place in the late Victorian West End mansion once owned by Atlanta author Joel Chandler Harris. “Each room will be transformed into one of the most iconic stories from Poe as the audience follows him through the last hour of his life confronting each character,” says Clowdus, known for his elaborate site-specific productions such as 2017’s Miss Saigon. “Be prepared to be chilled to the bone as you control your own journey through the house. Enjoy music in the lounge with a Poe cocktail, dance with The Raven in the study or attend a dinner party in the dining room with the mysterious masked man.”

This annual cult classic production at The Center for Puppetry Arts is a compendium of grisly tales and Halloween-themed songs. If you’re familiar with the work of writer and illustrator Edward Gorey or the films of director Tim Burton such as The Nightmare Before Christmas or Corpse Bride, you have something of the idea behind the Dreadfuls’ combination of grisly tales and grim humor. “The Ghastly Dreadfuls is easily one of Atlanta’s best Halloween shows,” wrote ArtsATL critic Andrew Alexander in a review of the show. “It serves up a deliciously old-school cocktail of grimness about death and humor, a reminder of what has always made Halloween so creepy and fun to begin with.” 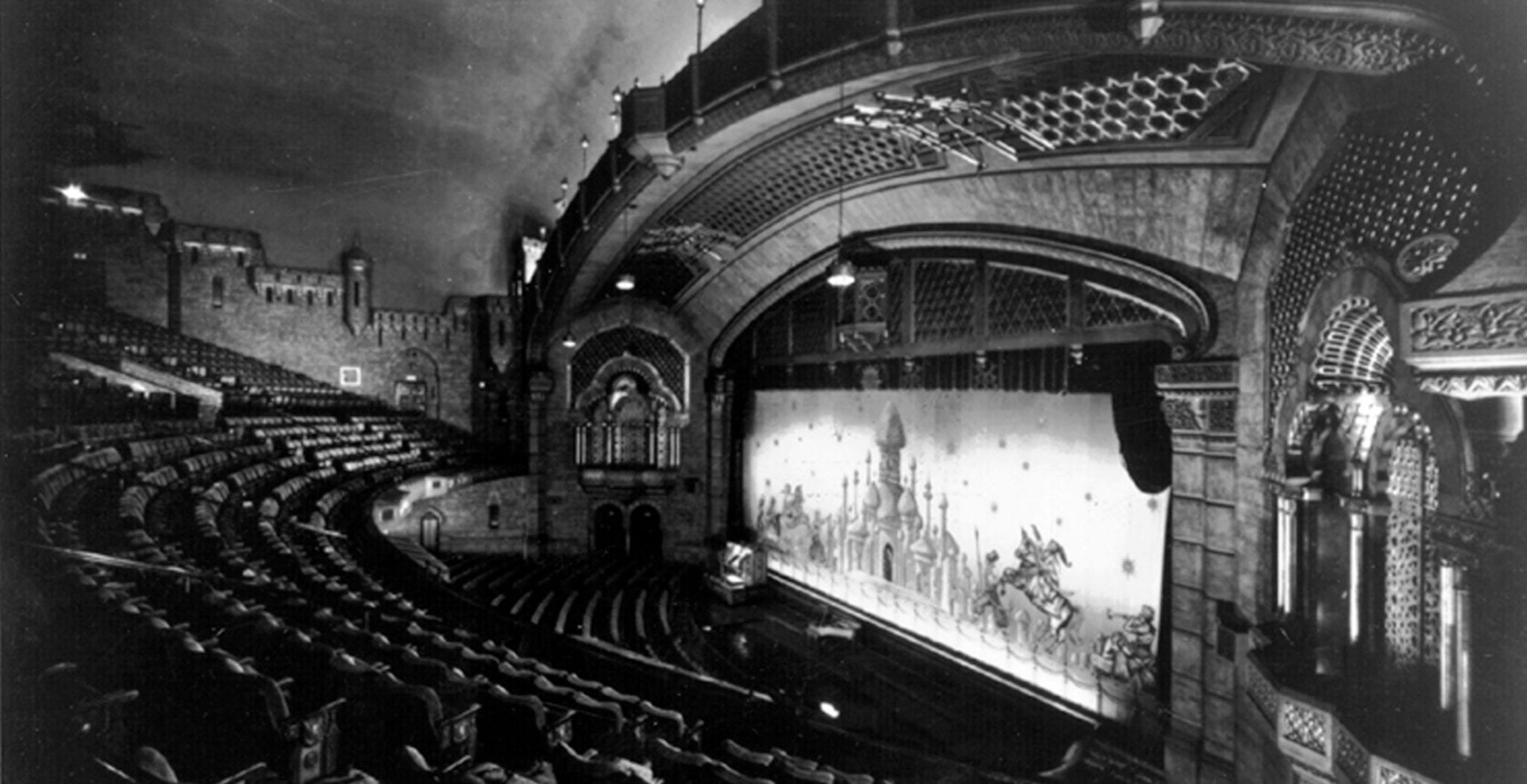 Sure the Fox seems cheerful enough when you’re there to see Annie, but have you ever lingered in one of its out-of-the-way nooks and crannies a little after showtime starts? We don’t advise it. The Fox Theatre and its normally opulent, glittering Moorish decor can start to seem a little creepy, almost tomblike. Plenty of people claim they’ve felt inexplicable chills, seen shadowy figures or heard the slow creaking of a door shutting. You can learn about some of these spooky encounters when the Fox Theatre opens its doors for the sixth annual Fox Theatre Ghost Tours this Halloween season. Costumed guides will lead participants through the theater’s many hallways and rooms. Some of them — such as the hospital room, power room, sub-basement areas and stage-freight elevator — are not typically seen on a visit to the Fox for a show. Tours will be available for four days only, on Thursday, October 25, Friday, October 26, Tuesday, October 30, and October 31 starting at 6 p.m. Tours start every 15 minutes and last approximately 60 minutes, with the last tour beginning at 8:45 p.m. 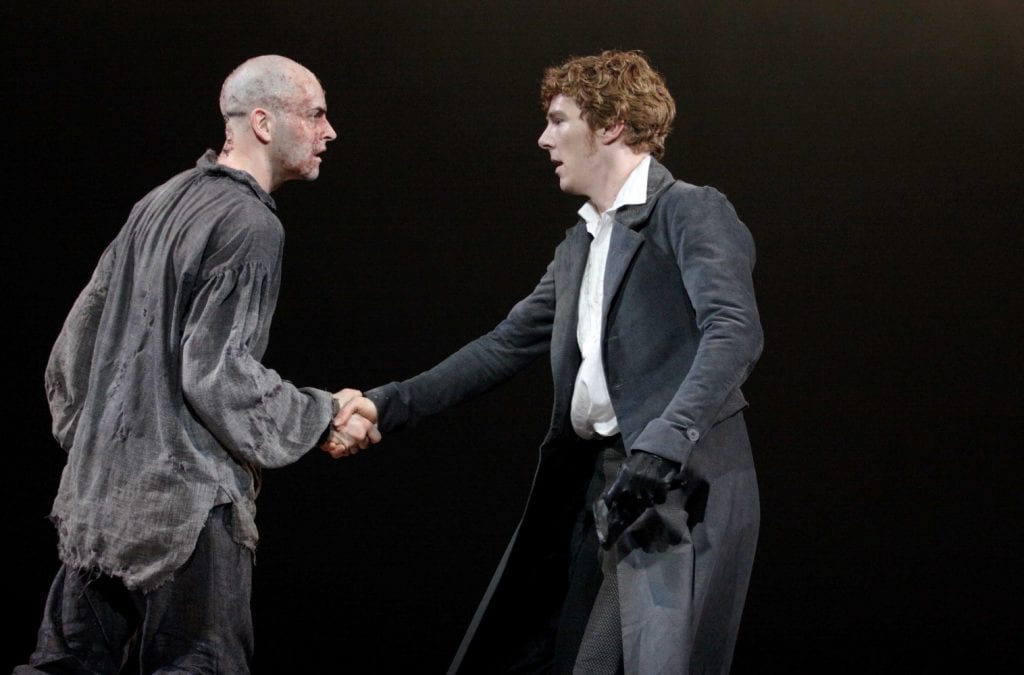 The National Theatre in London first broadcast its beyond-sold-out, hit theatrical version of Mary Shelley’s classic tale to movie theaters in 2011. The filmed version of the live show starring Jonny Lee Miller and Benedict Cumberbatch was such a hit that the company now rebroadcasts the production to movie theaters each Halloween. Directed by Academy Award-winner Danny Boyle, this version of the Frankenstein story has Miller and Cumberbatch alternating the roles of Victor Frankenstein and his Creature. October 22 will feature Cumberbatch as the Creature, and October 29 will feature Miller as the Creature, so there’s a chance for audiences to see either or both versions.

When we said Atlanta likes to get its freak on for Halloween, we weren’t kidding. There’s no better place to observe it all than the Little Five Points Halloween Parade, hands-down one of Atlanta’s best parties of the year. The parade starts at 4 p.m. at Austin and Euclid Avenues and moves up Euclid to Moreland, turning South on Moreland before proceeding to the Wrecking Bar Brewpub, where it does a U-turn and then proceeds to Freedom Parkway. Entertainment includes a lineup of popular Atlanta bands appearing on an outdoor stage in the Star Bar parking lot and also in Little Five Points’ central Finley Plaza. An artists’ market and food vendors will be on hand throughout the afternoon and evening. 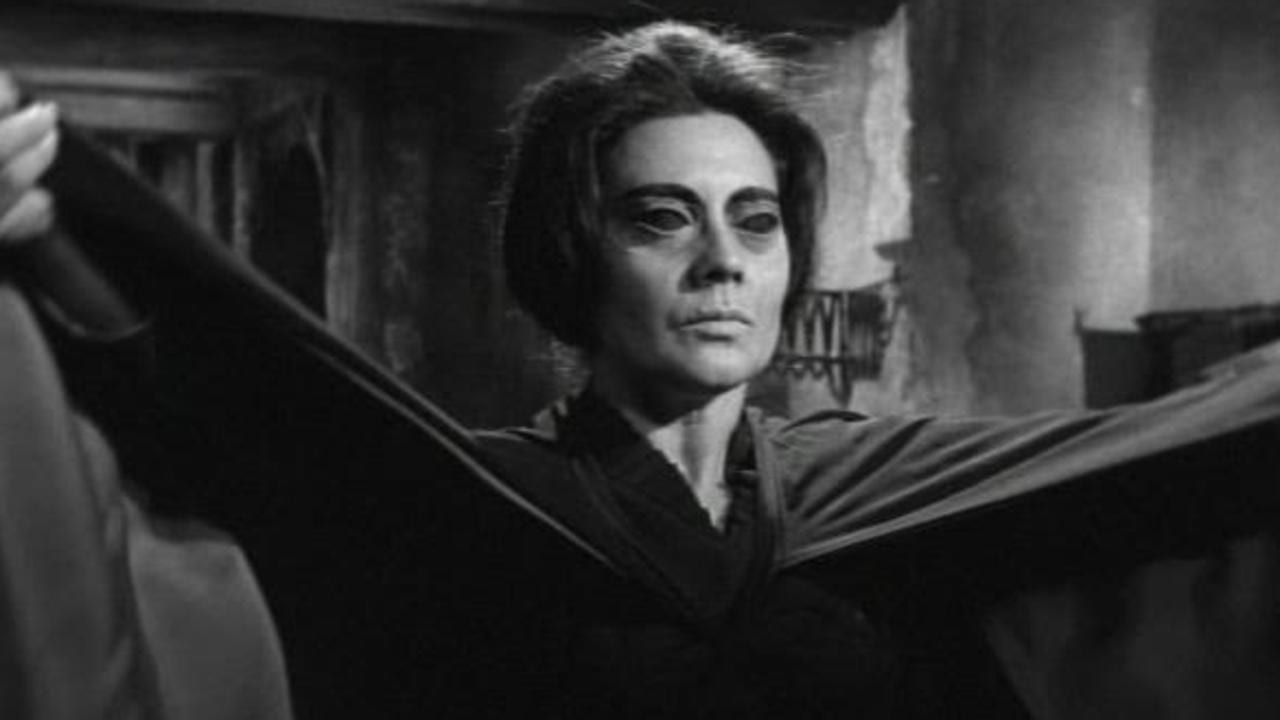 Must be the season of the witch. Murmur screens 1963’s black-and-white La maldición de la Llorona/The Curse of the Crying Woman by Rafael Baledón on October 20.

As fans of the genre, we sometimes feel we’ve seen every horror film in the book. We’re grateful, therefore, for Murmur Gallery’s dive into the relatively unexplored genre of Mexican horror. At 8 p.m., the gallery screens 1963’s black-and-white La maldición de la Llorona/The Curse of the Crying Woman by Rafael Baledón about a young woman who inherits a mansion only to discover that it’s haunted by witches and evil spirits. At 10 p.m. follows a screening of 1979’s La tía Alejandra/Aunt Alejandra by Arturo Ripstein about a vengeful old aunt who is secretly, you guessed it, a witch.

Assistant Conductor Stephen Mulligan leads the Atlanta Symphony Orchestra in a kid-friendly, Halloween and Harry Potter-themed concert. Audience members are encouraged to come in costume, with prizes awarded for the cutest, scariest, funniest and most creative costumes. 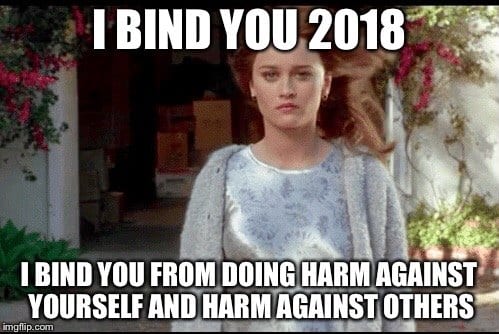 On Halloween night, our second favorite Atlanta publication, Wussy Mag, hosts a screening of the ’90s cult classic The Craft at the historic Plaza Theatre. It’s part of the organization’s ongoing series of film screenings at the venue, and these are always rowdy, fun, interactive, drag-filled events (prizes awarded for the witchiest looks). Superstar hosts Brigitte Bidet, Michael Robinson, Ellisorous Rex and XT Venus Valentine make us willing to suffer through the movie’s truly horrifying Smiths cover, and the screening is followed by a free afterparty, Night of 1000 Nancys: He’s Sorry at the nearby bar the Deep End, so we can continue our recovery and accept whatever apologies are offered there.

What more needs to be said? The great-granddaddy Halloween experience of them all, Netherworld, which actually consists of two distinct haunted houses, is regularly rated as one of the best and scariest Halloween attractions in Atlanta. It’s in a new location this year. We’re guessing it’s still pretty frightening. You go first and let us know how it is.

Who says Halloween has to be scary? A family-friendly, evening hike has kids heading down a well-lit path where they’ll meet woodland creatures like the Box Turtle and Dragonfly, who will tell them about life in the forest. Music, crafts, face painting and a campfire for s’mores all make for a fun Halloween experience that also offers a chance to learn about the natural world.

Mystery Science Theatre 3000 returns to Atlanta as part of a 30th-anniversary tour featuring, for the first time in 25 years, original host and MST3K creator Joel Hodgson as Joel Robinson. He’ll perform alongside MST3K host Jonah Heston (Jonah Ray). “The craziest and most exciting thing for me,” says Hodgson, “is that I am putting on my old jumpsuit and will be riffing live, shoulder to shoulder with Jonah, Crow and Tom Servo for two incredibly strange feature films.” The tour’s Atlanta stop does indeed offer two chances to see the cast riffing away on different films. Show #1 at 3 p.m. is The Brain, a Canadian science fiction suburban nightmare, and show #2 at 7 p.m. is Deathstalker, a sword-and-sandal epic featuring a horrible monster. Let ‘er riff.

Scarecrows in the Garden. Through October 28. Atlanta Botanical Garden. 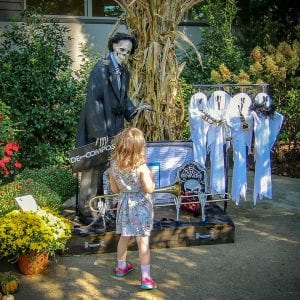 The garden is filled with creative scarecrows made by local businesses, artists, crafters, schools, youth groups and more. Entrants compete for prizes in one of two divisions — professional and nonprofessional. Fall-themed crafts, live music and storytellers, along with train and pony rides help complete the festive, family-friendly fall atmosphere. For mom and dad, there’s even a treat in the form of a cash bar.

Presented in partnership with the Consul General of Mexico and the Institute of Mexican Culture, the Atlanta History Center’s Day of the Dead festival offers a chance to learn about and experience the Mexican tradition of Dia de los Muertos. Guests can enjoy traditional dancing, crafts and Mexican food and drink available for purchase. It’s free admission to the Atlanta History Center itself, so all the center’s traveling exhibitions, gardens and historic house experiences will be open and free to the public during the festivities.