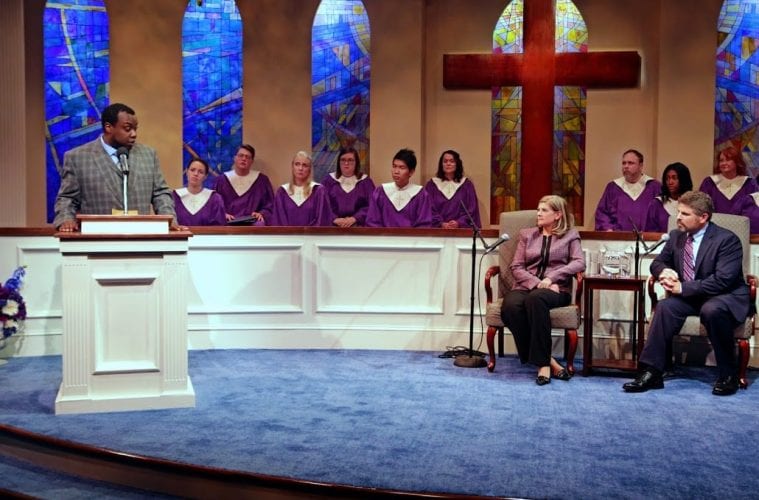 Review: “The Christians” bravely examines faith with moments that never quite catch fire

As he does every Sunday, Pastor Paul (Brian Kurlander) walks to the pulpit in his church and begins a sermon, as the 14-person choir behinds him sits attentively and absorbs the message, as does his wife Elizabeth (Kathleen Wattis Kettrey), associate Joshua (Enoch King) and Jay (Greta M. Glenn), a church elder. On this day, however, after some inner debate, he has decided to share a viewpoint that runs contrary to traditional church wisdom, a decision that proves to have serious personal and professional implications for him.

That’s the basis of Lucas Hnath’s play The Christians, running through October 15 at Actor’s Express. It’s a tightly orchestrated drama with some swell performances, but it still feels like a work that could reach a little further and have a smoother trajectory.

Paul has built his megachurch up to the point where thousands attend and hang on his every word. Yet when he — surprisingly — mentions that he doesn’t think that Hell exists, Joshua questions him publicly and in doing so puts his future in jeopardy. Some time later, Jay stops by to talk with the pastor and share some concerns, and even Elizabeth questions her husband’s statements.

Playwright Hnath was raised in a religious home, and it shows. This feels very real, almost as if the audience is eavesdropping on the early action. Isabel and Moriah Curley-Clay’s set looks completely authentic — with a stained glass window, large cross, video monitors and the audience serving as the congregation. It all is believable, and the play shrewdly examines reconciling personal and religious beliefs versus what is expected, especially from a pastor.

The Christians is a slow-burn play, though, that — ironically — never really burns. Its calmness and lack of histrionics from its playwright and characters are admirable, but the piece could benefit from some fireworks.

As directed by Freddie Ashley, the play is solidly staged and, at 90 minutes with no intermission, moves crisply. Yet, it’s a work that is more effective in scenes than as a whole. A sequence where Jenny (Sarah Newby Halicks) — a member of the choir and a single mother — asks the pastor a series of questions is masterfully staged.

She queries him, almost sheepishly, about his beliefs and how his statements have affected her. Even when she realizes she is not going to get the answers she seeks, she won’t give up. Halick’s performance, short but mesmerizing, is the jewel of the small cast. That said, the rest of the ensemble is mostly quite convincing here, especially King, whose confession at the end is a bit heartbreaking.

Oddly, The Christians is that rare play where the supporting characters prove to be more interesting and layered than the lead character. Kurlander is a terrific actor — his Suzi Award-nominated work in Horizon Theatre’s How to Use a Knife is one of my favorite performances of the year — and he makes Pastor Paul confident and believable.

But whether it’s the script, or the actor’s take on the role, Pastor Paul’s only shade seems to be unflappable. What’s missing from the performance is any doubt or tension. Like the play, the character seems a little restrained. As portions of his life start to spiral downward, Pastor Paul never seems like a man losing his way. He’s the same person he was in the first scene.

Hnath also has made some questionable narrative decisions. The characters speak into a microphone at the beginning inside the church but also throughout the show. It becomes a bit heavy-handed after a while and unnecessary.

For the first third of the play, it feels like the action will happen in real time. Then after the confrontation with Joshua, Paul begins narrating and setting up the actions that follow. That the play does so is disappointing. I wish Hnath were more willing to show the audience the aftermaths rather than have Paul spell it all out.

The Christians is a brave, admirable play that examines faith and isn’t afraid to muddy the water. Actor’s Express’s version maximizes the work, but as thought-provoking as it is, the play is hampered by some structural issues and a lead character whose journey seems muted.