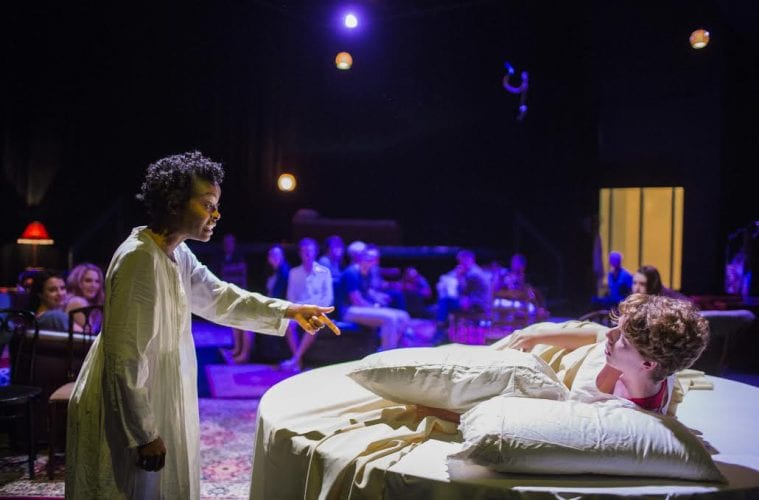 I’ve been to plenty of shows that aim for a unified effect but end up failing to bring together disparate elements. The production Midnight Pillow, running at Theater Emory through October 1, delights in following a very different path. It revels in its fractured aesthetic, cheerfully flaunting its disunity, creating an unruly collage out of a collection of dissimilar pieces.

The unusual approach is apparent from the moment you walk into the black box space of the Theater Lab at Emory’s Schwartz Center. Instead of being arranged in rows, seats for the audience are scattered throughout the performance space, pointing, not at one stage, but in every direction. There are several beds on raised platforms — the notion of sleep is big in the show — and pillows are everywhere, including a neatly made bed with a pair of plump pillows suspended upside down from the ceiling.

The show’s creator, Atlanta actress Park Krausen, directs a compilation of extracted scenes, monologues and very short one-act plays, all very loosely related to Mary Shelley’s Frankenstein (the novel is the focus of a number of events at Emory this year on the 200th anniversary of the work’s publication in 1818). Krausen is especially drawn to Shelley’s own description of the genesis of her novel as a “spectre which had haunted my midnight pillow.”

Sleep, dreaming and waking are primary themes, but consideration of Shelley’s position as a writer, who was also the wife of a prominent male poet, seems to emerge as central, as well. The often comic, occasionally nightmarish tribulations of marriage and shared domesticity, motherhood and Promethean chutzpah, run through the majority of the show’s pieces. This isn’t the Frankenstein of Halloween horror-movie thrills, but the novel’s underlying preoccupations bubble up in a weird, prenatal, noncollated way. There are a few nighttime terrors, sure, but also humor, meditative reflection, romance, anxiety and everything else, as they say, in the book.

The show begins and ends with performances of a satirical sketch excerpted from the work of Leonore Confino, enacted first by an older couple and then again by young students, imagining Adam and Eve in the garden of Eden; Eve doesn’t just thirst for knowledge, she’s bored in the static environment. Other segments explore related themes but in a vastly different mode: writer Awoye Timpo offers a dreamlike monologue of a mother on the edge, and Decatur-native playwright Lauren Gunderson’s short, sweet, two-person scene has one half of a couple who can’t help but go overboard in effusive praise of her partner.

The ride can occasionally be bumpy: Cristin Konig’s short play Waking Up is here broken up into little chapters and interspersed across other stand-alone segments. Even on its own, the little vignette might be a bit of a head-scratcher: one character is played by two actresses (a dream self and a real self) and one actor plays two characters (the husband and a Mephistophelean temptor), so it’s understandable if viewers are mystified.

The show is anchored by Atlanta actors Mark Kincaid, Danielle Deadwyler and Megan McFarland, who perform in the central Konig piece and several others; theatergoers familiar with the names will know they’re in good hands. But Krausen is also adept at placing younger student-actors judiciously, eliciting lovely performances in roles that fit them in interesting ways.

Under other circumstances, some viewers might be tempted to dismiss the impulses driving the show as experimental wheel-spinning, but what’s nice about Midnight Pillow is that its surprising sense of humor, its generously invitational spirit of shared exploration, its admirable pace and the charm of its invention help it to resist that sort of easy dismissal.

As a fan of the novel and its many adaptations, I was a little disappointed in the end not to find more of the stuff of the novel explicitly in the show. And although it was ultimately harmless, a brief preshow audience-participation element hit on a number of personal pet peeves: waiting in line to enter a theater, being asked a vaguely personal question by a stranger upon arriving and then (shudder) having the answer broadcast to the room. Well, whatever. I survived, and I’m grateful I did. Midnight Pillow takes a peculiar dive into Mary Shelley’s Frankenstein, finding not one thing but many.