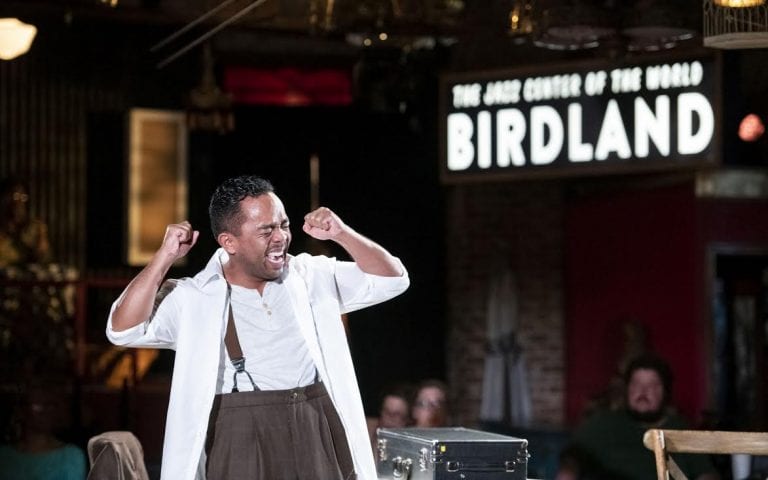 The Atlanta Opera opened its 2018–19 season this past Thursday with one of its successful Discovery Series chamber opera productions at Le Maison Rouge, Paris on Ponce: Charlie Parker’s Yardbird. Composed by Daniel Schnyder, with a libretto by Bridgette Wimberly, the opera (through October 7) explores with mixed results the persona of legendary bebop saxophonist Charlie Parker with music that draws from complex modern jazz idioms mixed with classical vocal and modernist influences.

The 57-year-old Schnyder, a prolific Swiss-American composer living in New York City, is himself a saxophonist and understands both musical worlds and Parker’s indelible impact on jazz. His Charlie Parker’s Yardbird had its world premiere in 2015 at Opera Philadelphia. That original production was presented on a traditional proscenium stage.

The Atlanta Opera’s Tomer Zvulun saw in the opera an opportunity for innovation: mount an entirely new production utilizing immersive theater in a space that looks like a jazz club in the manner of the first Birdland in New York, which took its name from Parker’s nickname among musicians, “Yardbird” or, simply, “Bird.”

Scenic designer Christopher S. Dills decked out Paris on Ponce’s lounge space, Le Maison Rouge, with a circular tiered stage in the center, surrounded by tables for the audience to sit at, and additional stages on three sides of the space. Against the fourth wall are terraced rows of chairs for audience not seated at the tables. The impression of the jazz club was completed with a panoply of finch cages (for which the NYC club was known) and a prominent back-illuminated sign near the entrance reading “The Jazz Center of the World — BIRDLAND,” so there was no mistaking the intent. High up on one of the side stages was poised a human-sized bird cage, which served as an allegory for Parker’s incarceration in Camarillo State Mental Hospital.

A purgatorial afterlife fantasy, the story takes place soon after Charlie Parker’s death on March 12, 1955, at the age of 34. Convincingly sung and acted by tenor Martin Bakari in this performance, Parker’s ghost finds himself in the Birdland club, ready and eager to write his intended magnum opus, music for an orchestra of over 40 musicians, before it’s “too late.”

But the notes won’t stay on the page. While Wimberly’s libretto is a kind of free-form riff on the heart, mind and complex moral anguish of the jazz great’s life, it is by far the perspectives of the women in Parker’s life that seem more to inform the tale. The story touches on everything from Parker’s incessant musical drive to the crushing experiences of racism, addiction, moral self-doubt and the death of a daughter.

The beginning is framed by the presence and influence of his patroness and friend, “Nica” de Koeningswarter (mezzo Gina Perregrino) in whose segregated “whites only” New York apartment he died. But quickly comes the presence of other influential women from his life, including his overprotective but resilient mother Addie (soprano Angela Brown, reprising her role from the Philadelphia premiere) and three of his four wives: his high school sweetheart and first wife, Rebecca (mezzo Chrystal E. Williams, reprising the role from an English National Opera production); his business-managing third wife, Doris (soprano Maria Valdes); and free-spirited common-law fourth wife, Chan (soprano Rachel Sterrenberg).

Each of the five deal with intense elements of both joy and tragedy in Bird’s short life. The only other male character among the principal cast is Parker’s closest musical compatriot, trumpeter Dizzy Gillespie (baritone Sidney Outlaw), who is an energetic, encouraging counterpoint to the women, pushing his friend to both make his best music and to “get off the tar horse” (heroin) to which Parker was addicted.

Despite a new, reduced orchestration for this 90-minute production — an octet of players plus conductor Clinton Smith – Schnyder’s music is texturally dense, which is stylistically fitting, and the instrumentals sound great. The operatic vocals, which at certain times made one think of Alban Berg more than hot jazz, are fascinating themselves.

The problem is following the words and the story if you don’t already know something about the tangled if all-too-brief life of Charlie Parker. The cast, guided by effective stage direction from Omer Ben Seadia, makes for good ensemble in support of the extensive principal role of the Bird, but the episodic story itself has a similar density and complexity as the music, like being asked to look at a whole forest while riding in a swift vehicle instead of taking time to ponder closely a single tree while on a walk.

At the same time, there is a lot of textual repetition that ought to allay that difficulty, but somehow doesn’t, even with supertitles. That takes a little of the wind out of the opera’s dramatic sails, as does a long ensemble scene of simultaneous farewells that drags along in its collective lamentation.

The concluding two numbers, however — Nica’s homage to Parker’s passing (“Starless Night”) and Parker’s own last solo (“I Know Why the Caged Bird Sings”) with its text drawn from the final stanza of the poem “Sympathy” by Paul Laurence Dunbar — make for a satisfying ending to an opera that has an interesting premise but could stand a little more leanness and clarity to drive its message home.

But if you can take it all in, as is, there is at the core a potent human story in this portrayal of one of America’s greatest jazz artists.