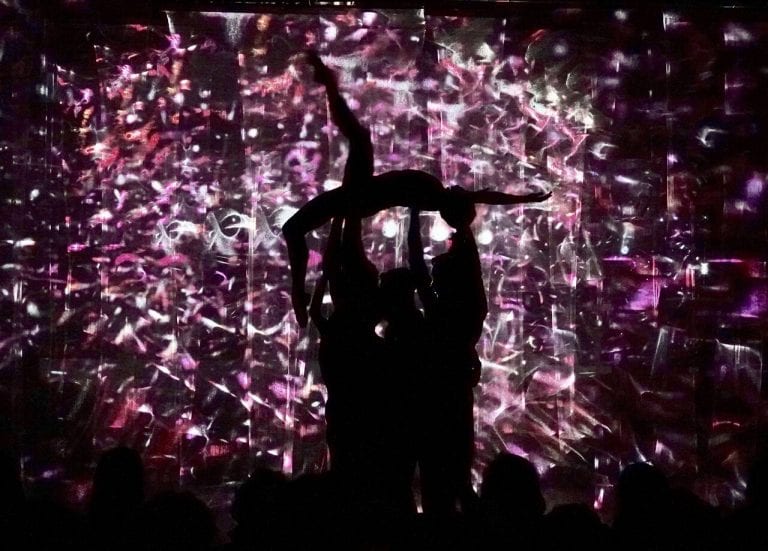 Terminus continues to impress with both its virtuosity and versatility. (Photos courtesy Terminus Modern Ballet Theatre)

Review: Terminus Modern Ballet takes a walk on the ethereal side in “Translation”

Terminus Modern Ballet Theatre closed out its 2018 fall season last weekend with the Atlanta premiere of Translation at the Westside Cultural Arts Center. Normally in a dance review, I would ascribe the name of the show to the choreographer, but in the case of Translation, it seems narrow-minded. While Troy Schumacher’s choreography was an integral and vivid component of this collaborative, multidisciplinary work, the lighting design by Sergio Mora-Diaz (which included projections that responded to performers and audience in real time) and the commissioned score by Julianna Barwick shared the stage equally with the dancers. Even the source material — a commissioned essay from cult science fiction writer Ken Liu — exerted an unusual, prescient force.

The show began with Mora-Diaz’s projection on a set of sheer drapes hanging in staggered patterns across the stage. Reminiscent of bubbling molecules or cells, the silhouette of dancer Tara Lee emerged from this scene of early life. As more dancers seemed to grow out of the ground and join her, the feeling remained hypnotic and otherworldly. They positioned their bodies in patterns that created biomorphic shapes, all through mostly slow, deliberate steps.

At one point, the group pulsated as a many-limbed organism; in another highly controlled duet between Lee and Rachel Van Buskirk, the two women existed for a moment as a two-headed creature. And yet, there were also other more human moments where physical contact transcended symbols and imagery, as when Laura Morton reached for Heath Gills’ chest as if encountering a beating heart for the first time. (It thumped upon her touch.)

All the while, tiny specks of light glittering through strips of fabric continued to radiate outward toward the audience. Subtle shifts in color and directional pattern occurred, but like the ambient music and subdued dancing, the overall tone was remarkably consistent.

Equally remarkable, the dancers remained in silhouette form for the next 30 minutes, an effect that peeled them back to two dimensions. In a way, the dancers appeared flattened, but like Kara Walker’s cut paper wall scenes, their evolving tableaux told a powerful, however abstracted, story through carefully constructed, and at times iconic, imagery.

Schumacher grew up in Decatur and studied at Atlanta Ballet’s Centre for Dance Education and is now a soloist with New York City Ballet. His influences and the choreographic hallmarks of that classic American company were easy to spot: the apotheosis from George Balanchine’s Apollo (the legs of three dancers forming a ladder of arabesques), a dramatic Jerome Robbins’ arm reach and even the primitive arm movements made popular by Vaslav Nijinsky, to name just a few.

In a feat of supple and surprising curation, Translation showed the refined eye Terminus has in utilizing outside choreographers to highlight different facets of the still new company of veteran dancers. The works of Lee and Gill — the two in-house choreographers for Terminus — have been successful for their inside knowledge of the company’s strength in storytelling, while their two commissioned evenings have provided Atlanta audiences with alternate looks at the broad genre that calls itself contemporary dance.

Danielle Agami’s Next Door last spring was full-throttle and tricked-out, showcasing their abilities in a high-energy, virtuosic way, while this production was a meditative and hypnotic reprieve from the pace of our modern era. I was reminded of how powerful it is to be away from the city and looking up at a night sky; how in those moments of magnanimity, it can feel unbelievable that quiet contemplation — let alone our ever-expanding universe — doesn’t rate higher in the consciousness of our daily lives.

And here I was, finding a bit of peace in a gallery in bustling West Midtown, even after braving the stress-inducing gridlock traffic caused by an Ed Sheeran concert nearby.

Translation had its New York premiere last spring for BalletCollective, the company founded by Schumacher. As part of a mixed bill, the entirety of the piece was in Mora-Diaz’s enigmatic universe. But in setting the work on Terminus, Schumacher expanded it to include a second half with the dancers in light. Evocative of a nightclub, the music became uptempo, and the dancers allowed more ease and personality to enter their movements.

Wearing practice clothes, they formed a semi-circle and performed solos for each other. Alex Gonzaga showed off a silly side with swiveling hips, and Christian Clark went on a tear of pirouettes that set off a larger call-and-response series of turns among the dancers.

While this fun section of pure dance came easy to the Terminus cast and was seemingly more in line with the natural athleticism that has permeated much of Schumacher’s choreography, it was a bit of a throw away, working only to shed a light contrast to that much bigger, darker world.

Ultimately, it was just another version of reality. I felt grateful when the projection returned at the very end, allowing me one more look at that infinite landscape of moving light and shadow.