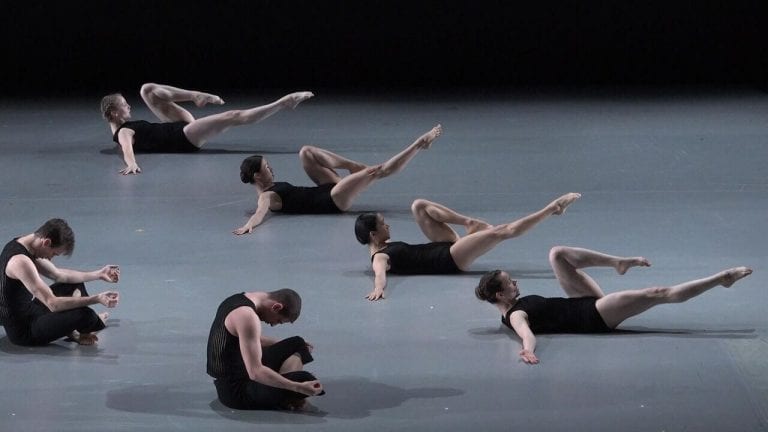 In Danielle Agami’s Next Door, Christian Clark and Rachel Van Buskirk, performers with Terminus Modern Ballet Theatre, appeared dressed in black on a stark stage setting. They moved across a pale floor, framed by black flats, Van Buskirk running at top speed toward Clark, who repeatedly caught her and carried her offstage struggling. Then, together in a still moment, Clark gently placed his palms on different places on Van Buskirk’s body — the mid-spine, back of the neck, a shoulder blade, as if sensing her body’s warmth, contours and texture. Suddenly, he snapped her leg up close to her ear, picked her up and turned her around. In the context of Next Door, this radical shift from delicacy to a physical extreme posed the question: what does it mean for an artist to stretch?

Is it in pushing the body’s physical limitations to achieve an ideal line in space? Or is it digging deeper into the performer’s psyche, stripping away the stage persona to get to a truer sense of being present onstage in the moment?

Both lines of inquiry filled the stage of Kennesaw State University’s Dance Theater last Friday in the world premiere of Next Door.

The hour-long work explored “the human with each of the cast members,” a program note read, and juxtaposed Terminus artists’ extraordinary physical abilities, honed by classical ballet training and experience dancing many styles of world-class repertoire, with the “complexity of pedestrian experience.”

Next Door was Terminus Modern Ballet Theatre’s first commission by an outside choreographer, and Agami’s first full-length work outside of her Los Angeles based Ate9 Dance Company. The collaborative project offered a fledgling dance company made up of Atlanta Ballet veterans and an up-and-coming modern dance choreographer a chance to stretch one another.

It was also a chance for Terminus, in its first year, to clarify its artistic identity. Agami, a master teacher of Gaga movement language created by Ohad Naharin, gave the group tools to strip away layers of persona, getting more at the essence of the individuals they truly are. As such, Next Door revealed deeper aspects of the performers onstage as human beings, showing the beauty in vulnerability and power in presence.

The project offered Agami, an Israeli dance artist shaped by eight years with Batsheva Dance Company and Naharin’s mentoring, a chance to break away from the Batsheva influence and to assert an original choreographic voice. Next Door showed Agami has made a start toward creating an intriguing hybrid language from Gaga and ballet, full of possibility. But the work’s tendency to fall back on Batsheva-style movement and patterns, and an inexplicable detour midway through the work, showed that Agami has begun to find her own voice but still has further to go.

The work is composed of about nine sections with music that was by turns evocative, driving and hypnotic. Ben Rawson’s lighting took advantage of the theater’s technical capabilities with striking and fitting changes of color, atmosphere and shape — from the stark, black-and-white beginning to intimate spaces created by angles on stage, to side light coloring dancers’ bodies to highlight the work’s most interesting pure-movement sections.

Clark and Van Buskirk’s duet depicted a conflicted couple moving between attachment and indifference, intimacy and aggression. At one point, their paths met and Van Buskirk cradled Clark’s head then slid down the front of his body to the floor. He dropped to a supine position beside her then raised his legs, upon which she lay, hovering for a moment until she dropped on top of him, and they rolled on the floor, suddenly moving like passionate lovers.

Tara Lee led the ensemble in with a striking entrance, from the audience right, her taut body wrapped in a sapphire blue leotard, weight grounded, knees bent, hips angled slightly back, spine held in a slight arch. To sounds of resonant chimes that recalled a Balinese gamelan, Lee moved as if sensing every cell of three-dimensional space around her, feet sensing the floor with every deliberate step. As she turned and shot an intense gaze at the audience, her energy — both animalistic and human — conjured something mysterious and mythical.

In a solo, John Welker, veteran of just about every principal role in the classical repertoire, showed himself in a new light. Poised on the floor in an angle shaped by Rawson’s light, Welker sat, legs in front of the body, as if in an unguarded moment in the studio. As he lay his torso forward over his legs, his honed and flexible body, the grace of his arch, appeared unmasked, uncovered, all stage personae stripped away.

In contrast to this quiet moment, larger groupings showed how movement generated through Gaga can revitalize classical ballet in ways that invigorate both forms. Women began crossing the stage with textured speed and grounded mobility, arms curving and folding around the body. Van Buskirk burst out of the melee with classical pirouettes and traveling steps ending in split-leaps, her classical moves possessing immediacy much like the explosive motion all around her.

The ecstatic pure-movement exploration dissolved into an extended duet featuring Lee and Heath Gill — a couple who seemed to share complex codependency, trapped between holding on and letting go. Gill’s subsequent aggression toward two inflatable punching bags followed logically. But when other props came out — flower pots, a box of scarves, platters of food and a leaf blower — a section intended as comic relief seemed more a distraction than a meaningful diversion.

Lee ushered in a final section filled with motion and physical intensity. To a driving Middle Eastern rhythm, performers spelled out movement with a dynamic sense of speed and articulation. Similar to Naharin’s work, a group of men moved in counterpoint to a group of women. More interestingly, they combined balletic and Gaga languages. Balletic leaps blended with more grounded rhythmic steps, some motions with outward rotation of the hips, others with the legs parallel. Dancers glided across the floor on the balls of their feet as in ballet’s bourree, but with legs in parallel, knees soft, and feet sensitive to the floor. They ran across the space with all their might. Such motion brought a vitality to the classical language, and a flexibility that opened up the form itself, as choreography and performance revealed dancers as human beings, more present in the moment, more bravely themselves and more approachable — yet larger than life.

This hybrid language promises great potential for further development. Next Door asked dancers to dig deeper into their humanness, and Terminus dancers more than fulfilled their self-revealing mission. Yet, the work seemed unclear on what it was meant to say, and in the end, the hour-long exploration was just that.