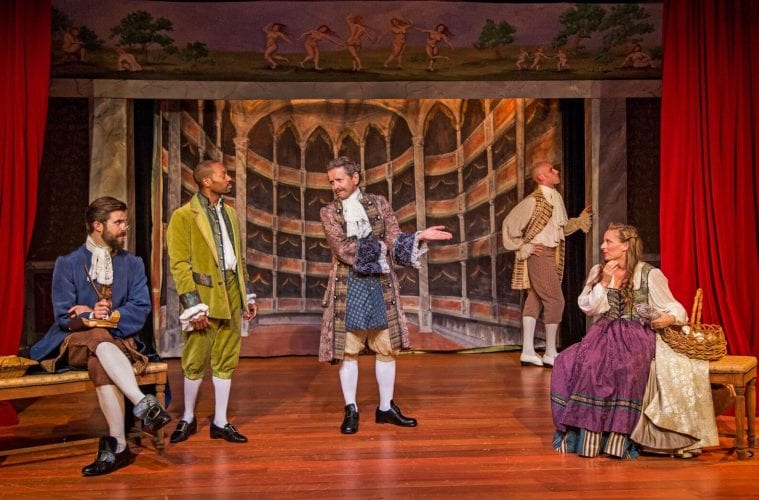 After Nomad Motel, Synchronicity Theatre’s Nell Gwynn became the second unsatisfactory three-hour play I saw last weekend. In spite of the length, which offered plenty of opportunity, the play never really found a way to enter into my affections. The show has an uneven script that doesn’t land in any one spot long enough for that. Dramatic scenes are interspersed with bawdy, sing-songy music-hall numbers. A serious biographical story based on a real historical figure has contemporary references and Mel Brooks-style humor. A tale of royal intrigue and dalliance in elegant period costumes has elements of audience participation. For reasons I only vaguely recall, the ending has the entire cast pretending to commit suicide one by one for laughs.

Contemporary British playwright Jessica Swale wrote Nell Gwynn for Shakespeare’s Globe. I can only guess that its wildly jumbled elements somehow came together better on that expansive outdoor stage, where commissioned contemporary playwrights often experiment with the original-practice traditions of that theater: direct address to the audience, musical numbers on period instruments, radical shifts in tone over the course of a long narrative, touches of broad comedy aimed to amuse groundlings and those elevated on cushioned gallery seats alike, and so on. Brought indoors and placed on a proscenium stage in the US, it’s a tedious mess.

Nell Gwynn, the 17th-century actress who became a paramour of King Charles II, was clearly an extraordinary woman, and she makes a promising subject for a play. But in England, Gwynn has been a familiar folk heroine for centuries. Having her rags-to-riches story dramatized can fill in imaginative gaps for English audiences in interesting and exciting ways because they arrive with certain expectations and associations already in mind. Audiences here likely feel less connected to the subject. A good story should be universal, of course, and we go to the theater to learn about new people, sure, but at the end of the day, Spielberg’s Lincoln still probably played better in Indiana than it did in Bristol. 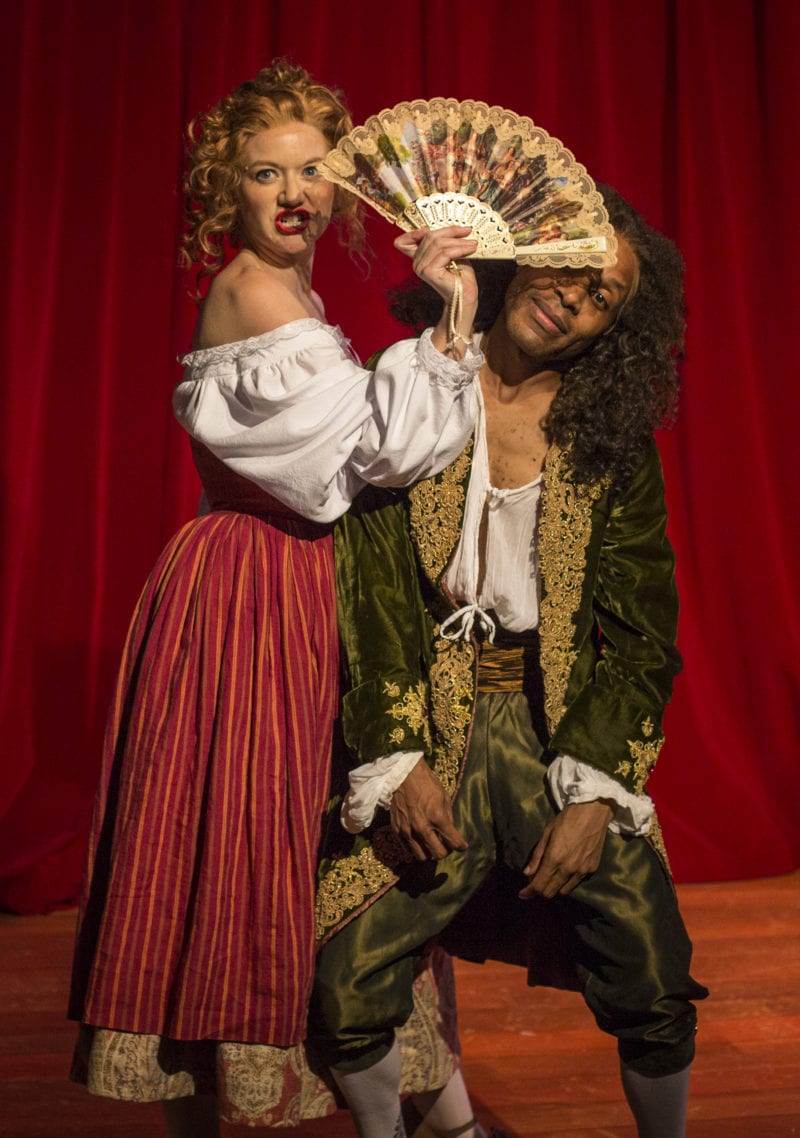 I had high hopes for the show when I entered the theater and saw designer Kat Conley’s fine set, which inventively narrows Synchronicity’s too-wide stage with architectural wings. All of it beautifully suggests the period with a touch of timelessness and something self-consciously stagey about it (perfect for a tale about the theater).

But the play’s frequent ensemble scenes end up seeming too claustrophobic and confined in the newly delimited space. Scenes with two or three actors fare better, and thanks to a fine cast, some individual interactions in the play — such as when actor Charles Hart (Eugene H. Russell IV) lures Nell Gwynn (Courtney Moors) onto the stage or when King Charles II (Robert Shaw-Smith) first visits and seduces Gwynn — pop vividly to life.

Overall, I admit there’s more than a little hypocrisy in my newfound complaint about the length of these two recent shows. I’m the first to roll my eyes when someone moans about the length of something. A tale takes as long as it takes to tell. Sometimes a long show doesn’t work out, or it simply fails to please. This can be frustrating, sure, but that’s simply part of the risk of doing anything: it could be great, but it could also take too long, and you might not like it. No one sets out to make a show by saying, “We’ll make it too long.” All of this I understand. But by the same token, I counsel against any willfully blinkered disregard on the part of theater artists as to what they might justifiably be able to get away with on stage, and for how long. I’ll never stake a claim against length itself, but I certainly dissuade the use of blinkers.

I forget how many musical numbers are in the show, maybe five. I think the show could lose about five of its musical numbers, songs that aren’t so much sung as shouted at the audience. In the style of plays produced at Shakespeare’s Globe, the entire cast sings and dances during the final curtain call and, strangely, this song sounds very nice.

The performers are not lip-synching, but that last number nonetheless put me in mind of something I’d more or less forgotten. There was once a popular singing group called Milli Vanilli. They were revealed to be lip-synching during a concert when their recorded track started skipping. Fans subsequently found out that the handsome pair had never been singing on their albums at all, and Milli Vanilli suffered one of pop culture’s most infamously precipitous descents. A kind television host named Arsenio Hall tried to help staunch the flow of blood by inviting them to sing live on his show. His enthusiastic response to their song — “Why didn’t you do this in the first place? Man, you guys can sing!!” — popped into my exhausted mind as I applauded the cast during that final number at around 11 p.m. on Saturday evening.

But just as with Milli Vanilli, things couldn’t really be made right again so easily. What Arsenio couldn’t fix — even if the members of Milli Vanilli had sung like Pavarotti — was the audience’s sense that some unspoken contract of trust had been broken. It was simply too late.