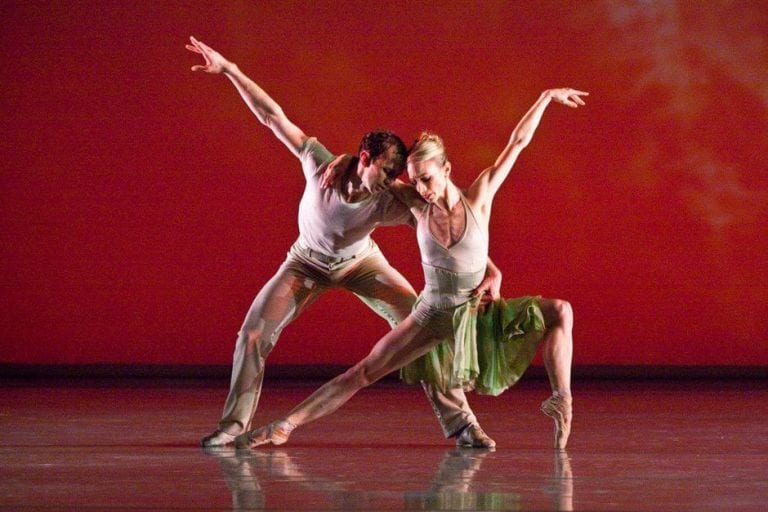 Atlanta’s favorite ballerina from the past 20 years is coming out of retirement.

Christine Winkler, who was the prima ballerina for Atlanta Ballet for 19 seasons before hanging up her pointe shoes in 2014, will dance with Terminus Modern Ballet Theatre in fall-en by choreographer Heath Gill. The performances will be outdoors at Deer Hollow in Serenbe October 5–7 and 12–14.

Winkler retired from Atlanta Ballet in 2014 to much fanfare. Last year, she became the education director for Terminus, which was cofounded by her husband, John Welker, and four other former high-profile Atlanta Ballet dancers. Winkler says the allure of dancing with him again was too much to resist.

The couple, who partnered in lead roles for many of Atlanta Ballet’s signature productions over two decades, will perform a pas de deux in the world premiere of Gill’s piece. Winkler talked to ArtsATL about her upcoming performance and about what led to her decision to dance again.

ArtsATL: Back when Terminus was forming last year, I asked John Welker if you were going to come out of retirement, and his response was, “Christine said she’ll be glad to dance again . . . if someone gives her three million dollars.” And yet, here you are. What persuaded you to dance again?

Christine Winkler: How quickly things can change. [laughs] And it was one million dollars, by the way. [laughs] The question kept coming up; people would ask, “Why don’t you come back and make a cameo?” And every time I saw Terminus perform, I thought to myself, they’re doing what I like to do as a dancer. Secretly, I always thought it would be so much fun to do something with them.

A month and a half ago, Heath was in the studio alone creating this work, and I walked in and he said, “I have an idea for you.” He told what he envisioned, and it felt right.

ArtsATL: Catch us up on what you’ve been doing since you retired from Atlanta Ballet.

Winkler: A lot. I’ve been wearing many hats. I teach part-time at Kennesaw State University, and I started that in 2014. In 2015, I started pilates certification training, and now I teach at Inspire Health. And the past summer, I became education director for Terminus. Plus, I’m raising a five-year-old.

ArtsATL: How has it been for you getting back on the dance floor?

Winkler: My first ballet class was September 6, and it was a shocker. [laughs] When you’re teaching ballet and pilates, you think your body is in shape. Then you start to dance and realize: I have work to do. My muscles were not finely tuned. Heath promised me it wouldn’t be too hard, that I’d do a lot of standing and posing. That’s not how it’s worked out. [laughs]

ArtsATL: You and John Welker were Atlanta Ballet’s “it couple” for nearly two decades, and off stage, you’re husband and wife. How has it been to reconnect on the dance floor?

Winkler: It’s been so nice. You forget that time was so special, having that quiet space together. It’s been fun and feels really natural. That was another incentive, working with John again. It just feels right. People always asked, how do you dance together and then go home together? But we loved it. It’s been amazing to have focused quiet time like that when there’s no one asking for a juice cup or to go potty. [laughs]

ArtsATL: Is your comeback going to be a one-shot deal, or do you think you’ll be doing this again?

Winkler: That’s a good question. I don’t know. We’ll see where this leads. It’s been four years since I’ve danced. People assure me that it’s looking good. I did give Heath an out in the studio. I told him that if he thought it just wasn’t working, he could tell me. And so far, that hasn’t happened. [laughs]