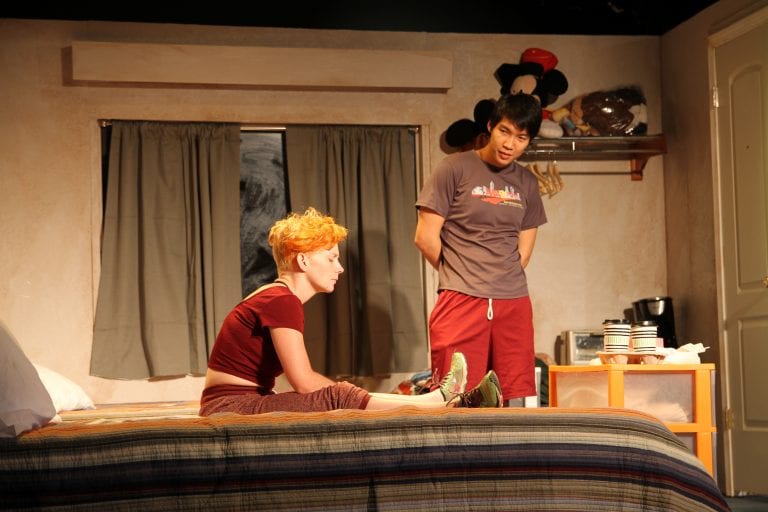 Review: Horizon’s “Nomad Motel” is a play with good parts that lacks a binding story

A motel kid meets a parachute kid; a child of want meets a child of plenty. That’s the reasonably appealing pitch for Carla Ching’s decent but faulted new play Nomad Motel, currently in production at Atlanta’s Horizon Theatre through October 21.

A central story beyond that initial pitch might be hard for a theatergoer to identify or describe to a third party after the show. This seems a reflection of the play’s primary problem: interesting things happen to interesting characters, but a driving storyline, a single compelling narrative thread, remains elusive.

A motel kid is the term used to describe someone like Alix (Ashley Anderson); impoverished and functionally homeless, her family survives by moving quickly through a series of cheap, run-down, pay-by-the-week motels. A parachute kid is the term used to describe someone like Mason (Kevin Qian), a child from a wealthy Asian family who comes to live in the US independently to attend high school in order to increase the chances of being admitted to a top-notch American university. Both characters attend the same California high school, and the two are thrust together after being assigned to a homework project done in pairs. Voila.

It’s a promising setup, and there are interesting incidents in the various scenes that unfold: clashes, misunderstandings, bonding and finally romance, and all of this is finely rendered. But the play, which seems like it would have an iron-clad structural strategy in switching back and forth between Alix and Mason’s lives and dramatizing the scenes between them, somehow develops a loose, rambling, peripatetic feel.

In several scenes, the leads hold an empty box and pretend there’s a sick bird in it, which the characters are nursing back to health. I bet you can guess they set the bird free at the end. It’s less terrible than it sounds, which is a complicated, backhanded way of saying that Ching is a good writer, though situations and sympathies tend toward predictability and familiarity. I was delighted by things more often than I rolled my eyes, but in all honesty, there was a good deal of both during the course of the show.

Plays that center on high school kids also often seem to encounter the problem of stronger performers in the supporting adult roles. This is the case here with Liza Jaine as Alix’s mother and Wai Yim as Mason’s father (I actually think Yim’s performance is even more interesting than the role as written, so this is no small accomplishment). The play’s least likely and most unexpected scene, an encounter between Mason’s father and Alix’s mother, is also one of its best. While Qian and Yim make for a compelling father and son, I never quite bought Anderson and Jaine as a believable mother and daughter. And Marcellis Cutler gives a fine performance as Alix’s boyfriend Oscar, but overall, the character ends up feeling too peripheral, adding to the sense of a lack of focus in the story.

The attention to detail in the set by award-winning scenic designers Isabel and Moriah Curley-Clay is mind-bogglingly stellar as usual, but I’ve lately begun to wonder if they sometimes show us too much. Their magic is a perfect match for shows like Horizon’s ongoing series of comedies Waffle Palace, wherein they recreate the look and feel of a waffle chain restaurant so accurately that theatergoers can’t help but rush to take their picture on the trippy set the moment the show is over. Their attention to detail also worked beautifully in the grand sweeping family saga of Dividing the Estate at Theatrical Outfit. But it misfired completely in the recent production of Abigail/1702 at Aurora Theatre; characters in the intimate drama were swallowed by a set that seemingly sought to recreate the entire outskirts of colonial Boston.

Here, on one side of the set, we see a cheap, grungy motel room, rendered exquisitely, from the curtains to the furniture and bedspreads. It all even changes as Alix’s family falls on harder times and the rooms get worse and grungier. But a plain bed on a bare stage might have actually done fine; a live audience filling in such imaginative gaps collectively is part of theater’s power. Coupled with the script by Ching, who writes often for television, the realistic set often causes the naturalistic drama to develop the feeling of something that’s in-between: almost-but-not-quite-theater, almost-but-not-quite television.

I always check a show’s running time before heading to the theater. (This is a transgression, I admit, but sue me: I like to know how long I’ll be there for. I’m grateful for theaters that extend this little courtesy; I imagine many other audience members feel the same.) The estimate said “two hours and fifteen minutes,” which struck me as a little long for the sort of intimate, subdued character-driven drama in the pitch. But in such instances, I like to be proven wrong in my predictions. The actual show clocked in much closer to three hours and fifteen minutes, which was indeed a little too long for the sort of story being told. It’s a credit to Ching’s writing that I was bored or impatient as seldom as I was; but in the end, three hours of polished, accomplished, discursive scenes aren’t what I long to see.