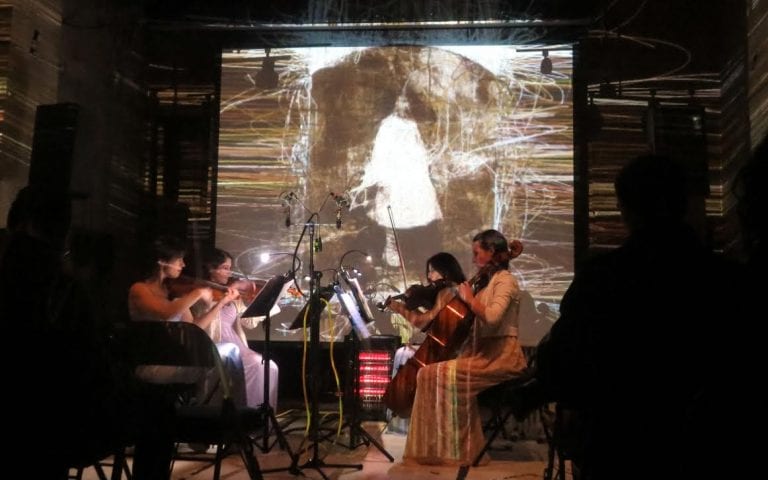 On Sunday night at Eyedrum Arts and Music Gallery, the Atlanta-based string quartet Cantos Y Cuentos made their world debut, performing music by Stephen Wood, Nicole Chamberlain, Adam Scott Neal, Olivia Kieffer, Gergely Vajda and David Del Tredici. The quartet’s musicians — violinists Emily Laminack and Tracy K. Woodard, violist Martha Oceguera and cellist Erica Ransbottom — have performed together in the past, but this was their first time under the name Cantos Y Cuentos (Spanish for “Songs and Stories”).

The concert also incorporated computer-generated artwork of Clayton Davis throughout, with his evolving images projected on Eyedrum’s large in-house screen, spilling out beyond its edges onto walls, columns and the musicians themselves.

Davis’ projections, often based on existing photographs or other static images, were developed specifically for each of the compositions performed by the quartet. Each new image was realized as a compounding sequence of luminous Bézier curves which developed, over the course of the music, from an empty canvas toward an emulation of the source image by means of a sophisticated algorithm.

The program Davis developed for this purpose — the Peglegasus Image Processing application — produces a distinctive style, with the Bézier curve paths reminiscent of long, free strokes of colored pencils or crayons, but rendered with light. Davis’ art provided a consistent thread that supported the overall arc of the well-structured, intermission-less program.

Cantos Y Cuentos opened their concert with “The Gladie Suite” by Atlanta composer Stephen Wood, best known for the explicit connections his music has with nature, wilderness, environment and geography. Wood composed the suite for his 2016 “Living Archaeology” composer’s residency at the Red River Gorge Geological Area in Kentucky’s Daniel Boone National Forest, in honor of the 50th Anniversary of the National Historic Preservation Act of 1966. The suite’s four movements offer impressions of the Gorge Area’s historic Gladie Cabin, sandstone formations, rugged terrain and small fauna in an amiably listenable style.

Another Atlanta-based composer, Nicole Chamberlain, was represented by her “Coalescence.” Each of its two movements posed opposite dramatic effect in its structure. “Coagulation,” the initial, slower movement, ultimately drew the quartet’s harmonies to a single gravitational center: a unison middle C. “Discombobulation,” the faster second movement, unraveled the process of musical development while trying to block fruition of its opening intent.

“Blocks” by Adam Scott Neal proved Cantos Y Cuentos’ more rhythmically invigorated performance of the evening. The title, according to the composer, refers both to “block chords” and to Stravinsky’s “block form,” and the work features much repetition and variation of musical ideas and their sequence without losing interest over the course of its nearly seven-minute duration.

Although not the end of the concert, the final string quartet work played was “Acrostic Song” by David del Tredici, the moving lullaby-like aria that concludes the Pulitzer Prize-winning composer’s “Final Alice,” the fifth of his six expansive works for soprano and orchestra based on Alice’s Adventures in Wonderland by Lewis Carroll.

There are many arrangements of “Acrostic Song” in existence, with or without voice, including versions for wind band and unaccompanied chorus. For this concert, violinist Tracy K. Woodard arranged the evening’s instrumental rendition for string quartet. Intriguingly, Woodard opened her arrangement with pizzicato strings — the stark contrast to other arrangements which maintain a legato texture intact for the duration of the work.

Although this was an instrumental arrangement, it’s still important to know that the text set by Del Tredici is the acrostic poem that ends Through the Looking Glass. The first letters of each line spell out Alice Pleasance Liddell, the young girl who was Lewis Carroll’s muse for his Alice stories. Davis’ artwork was based upon a photograph of Liddell at age seven, taken by the author, which, through the computer algorithm is projected as a rather haunting, if sentimental apparition, as if half-remembered.

The remaining two works on the program were duos.

Hungarian conductor and clarinetist Gergely Vajda is best known around these parts as music director of the Huntsville Symphony Orchestra in Alabama and principal guest conductor of the Hungarian Radio Symphony Orchestra, but he is also a gifted composer. His three-minute violin duo “Schnitte” (literally “slice,” as in a slice of bread), composed in 2015, proved a engaged dialogue of close harmonic tensions between Laminack and Woodard.

Woodard was joined by violist Oceguera for the concluding work, “Two Horn Unicorn” (2015) by Atlanta composer and percussionist Olivia Kieffer. Originally for flute and viola, it’s a busy work in Kieffer’s familiar post-minimalist manner. The composer says, in online notes about the work, that among creatures of the forest of the mind, “the loneliness of Unicorn has made him grow a second horn and he hasn’t found singing to undo it.” That requires the player of the upper voice (violinist Woodard in this instance) to sing or speak a short passage within it.

Overall this was a stimulating program of new music put forth by Atlanta’s newest chamber ensemble. One looks forward to what Cantos Y Cuentos will have on tap for their next concert.